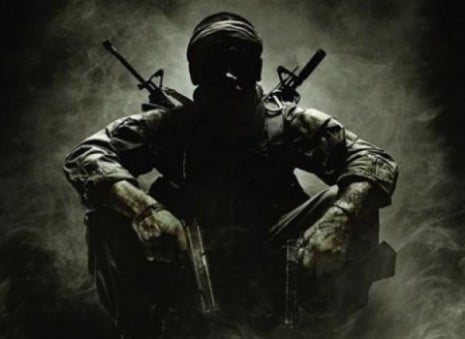 I wasn’t planning on picking up Call of Duty: Black Ops for some time as Modern Warfare 2 didn’t feel like that long ago and there were better games to purchase. Big mistake in dropping $60 on Fable 3 instead.

But I recently received the game in the mail from some divine benevolent badass I know, and so I get to play and write up my thoughts on the game for you all to enjoy. No epic 3,000 word rant here like I dismembered Fable 3 with. Rather, I’ll be doing a few journal installments as I progress through the campaign and multiplayer. I’ve had the game three days now, and these are my initial thoughts.

I’ll start with the campaign, as that’s relatively easy to cover. Campaigns in nearly every COD game over the years have tried to top themselves in being action packed, and so far, Black Ops has taken the crown from any past entry. There are few moments in the game that aren’t insane massive gunfights, and sometimes it can approach overload and you barely feel like you’re contributing to any of it.

I had thought Black Ops was set in the present day, but it appears Treyarch didn’t quite make it all the way there. Rather we’re stuck in and around the Vietnam era with the Russians set up to be the main villains in yet another war game, despite us never actually fighting them. 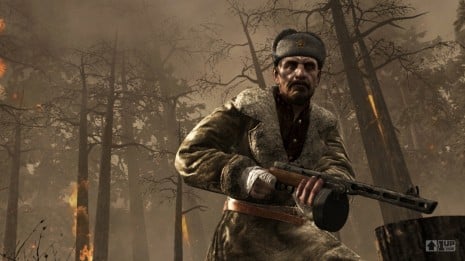 Russia has had a far more impressive fictional history than an actual one.

But maybe we did SECRETLY which is the whole premise behind Black Ops. Some shadowy figure has tied our central character up and badgers him about his past covert ops history that we get to live out through playable flashbacks, that often border on giving me seizures as the game constantly flashes numbers, images and video in quick succession in between scenes meant to imply some sort of brain-tampering with our hero. But it’s getting to the point where it’s causing brain tampering in real life.

I have yet to experience the kind of “Oh shit!” moment I felt when the nuke went off in MW1 or during “No Russian” in MW2, but I suppose there’s still time as I’m probably about 2/3rds of the way through the game. I do like the plot set up as a big mystery, as it’s more intriguing and plausible than past plots which have essentially been World War III. And I’m pretty sure my character isn’t going to unexpectedly die in a random cutscene and be replaced by someone else.

I do have to note here that Black Ops feels different than Modern Warfare. As it’s a completely different studio, that’s no surprise, but MW just feels more realistic in both campaign and multiplayer. It’s hard to put into words, but things in MW just seemed to have weight behind them, killing an enemy felt…right. Not in the moral sense, but in the tactile, visual and auditory sense. It’s only a little bit different here, but it feels just a little less realistic than Infinity Ward’s series. 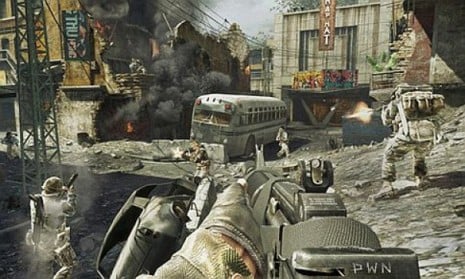 Graphics are good, but in multiplayer can be a bit muddy.

But that being said, for the most part Black Ops multiplayer is leagues improved over Modern Warfare‘s once you get settled into the new feel of it.

Not since Assassin’s Creed 2 has one sequel fixed more of the issues from a previous installment in a series. Treyarch has torn through Infinity Ward’s balance issues from Modern Warfare 2, which for the life of me, I never understood why they didn’t fix with a patch as they were incredibly obvious and made the game insanely frustrating for non-exploitative players.

Noob tubing? A thing of the past. Several steps have been implemented to make sure grenade spamming is no more, with the biggest step being the elimination of Danger Close as a perk altogether. This also makes you less likely to die from ridiculous blasts from claymores, grenades and airstrikes which was also a pain in the ass previously. Also eliminated is the ability of Scavenger to refill launched grenades and the resupplying One Man Army has been axed completely.

As for sprint knife/shotgunners, Marathon no longer gives you infinite sprint, only extended, and hallelujah, Commando has been removed entirely, meaning no one will lunge ten feet across the room to kill you anymore. Meanwhile shotguns have been once again made into their own class, a decision that fixes people sprinting around with dual 887s, though it’s kind of made the gun useless on most levels. I would have been fine with leaving it as a secondary, just with its abilities heavily tapered, as I do miss using it in the occasional enclosed space, but in most levels it’s suicide to pick as your class. 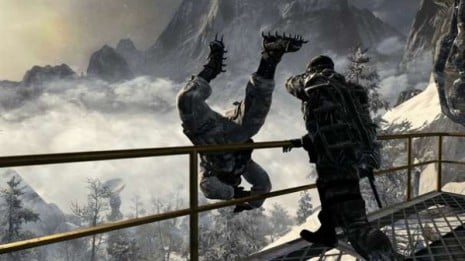 “That’s for shotgunning on Summit!”

Also eliminated is Stopping Power, which was a huge staple of MW2 which simply made your bullets hurt more, thus making it exceptionally necessary in many loadouts. But with the option gone completely, you’ll have to rely more on the damage stats of your guns for a change, and it frees up a slot for another useful perk.

Killstreaks are less invasive as well, with unavoidable Predator missiles no longer constantly raining down from the sky. That perk is still available in a way with guided missiles, but they’re harder to pilot and it takes 8 kills to get them. The RC-XD remote controlled bomb car can be frustrating, but you can stop it if you see it, and you die from it far less frequently than the pervasive predator strikes of the first game.

Leveling up is different as well as players now purchase perks and logos rather than simply unlocking them at a level. Guns are still unlocked via rank, but you have to purchase them as well as their attachments, which is a bit annoying, but overall I’d say the system is better. I’m not high enough to start changing my camo and gun sights, but I’ve seen some cool ones, though some venture into being a bit cheesy. But at least it’s SOME kind of customization, which previous games have been lacking in lieu of getting 1000 headshots with each weapon.

I wish these games would figure out some sort of leveling system that doesn’t rely on prestiging which resets everything you’ve worked for. Yes, I know there are new things you can do after doing this, but I really don’t think the best way to motivate players to move forward is to routinely make them throw away almost everything they’ve earned so far. 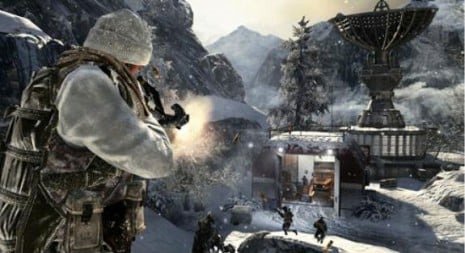 “I love this gun! I can’t wait until I have to throw it in the garbage!”

But Black Ops doesn’t trump MW2 in all areas. Namely I’ve been having a large amount of difficultly connecting to and staying in games. I have yet to even be able to play a free for all match, as it simply keeps searching forever until I give up. It takes a long, long time to be initially matched up with a game, and I’ve been dropped from probably 20% of the games I’ve played. MW2 had lightning quick match placement, and I rarely was ever booted from a game.

I also don’t think Treyarch has done a very good job with the maps here. I understand they’re drawn from different levels in the campaign, but they don’t seem to be very diverse, and most are a loose collection of small to medium sized buildings and hallways with not very many discernible features. Modern Warfare’s maps seem like real places that you just happen to be playing a video game in, while these maps feel overdesigned and full of random buildings and corridors that end up being purely a maze with the victor whoever can twitch their finger to the trigger the fastest when two people turn the same corner.  Afgan, Estate, Highrise, Quarry, Scarpyard, Terminal, Wasteland. Each of these were distinctive environments with varied layouts, but 80% of the maps in Black Ops just seem like the same collection of buildings shaken up and dropped in a different part of the world.

The only unique map that even comes to mind at this point is Nuketown, an insanely small map that makes Rust from MW2 look like a sniper’s dream. It perhaps best exemplifies Black Ops other major issue, spawning, as I routinely appear in front of enemies, both of us equally surprised and one of us dead half a second later. This happens routinely in other levels as well, as close spawns meant to keep you in the action often end up screwing you over by planting people behind your flank when they should be spawning with their teammates. 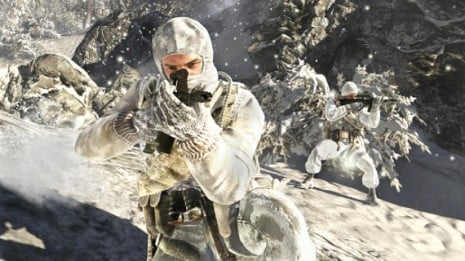 I have yet to find any map that’s true worthwhile to snipe it, which is good for me because I’m awful at sniping and too good at getting sniped, but it does make gameplay a bit less diverse.  On the third day today I just got a new map I’d never seen before, so I guess it’s possible I just haven’t worked my way through the rotation yet. I think a “snipers only” game mode here would go a long way here, but I guess that’s what most Hardcore games are.

There’s a lot more I could say about multiplayer here, and I will in future journals, but I would like to conclude with a big THANK YOU to Treyarch for FINALLY including local online co-op in the game. It perplexed me for years why this was never even an option in both Modern Warfares, as sometimes I have my friends actually come to my HOUSE to play video games with me rather than just doing it via Xbox live miles away. It makes the game a lot harder for both players yes, as you can’t tell which screen has footsteps approaching them, and far away enemies are even less discernible than they were before, but the option is still a great one to include.

That’s all for now, see you back in a week or so when I can start unlocking gun reticules.

Artist BeanBean is a huge League of Legends fan, as am I, and we both support the in-game nation of Demacia. They’re the good guys, for anyone who doesn’t play. Bean decided to do a…

httpv://www.youtube.com/watch?v=bG2mdZ23eP8 You may think that I’ve been sitting here writing posts all day, but you’re wrong. I actually wrote everything in advance so I could sit on my ass playing Mass Effect 3 all day…

is the latest installment in the God Eater series. In short, it is an action RPG from the sub-genre that was started up by the Monster Hunter series, so it should come as no surprise…

(click to enlarge) Yes, this is my second Super Smash Bros. family picture in as many days, but I don’t think it’s from the same artist. Though it might be. I can’t tell.  Tineye is…

Every single time I visit my nephew and niece I get nostalgic about video games.   At the current time I barely play any.  Don’t get me wrong.  I love video games but I just don’t…

Deus Ex: Human Revolution was my favorite game of the year it was released, and it’s stuck with me all this time. The story, the atmosphere, the gameplay the soundtrack. All of it was absolutely…