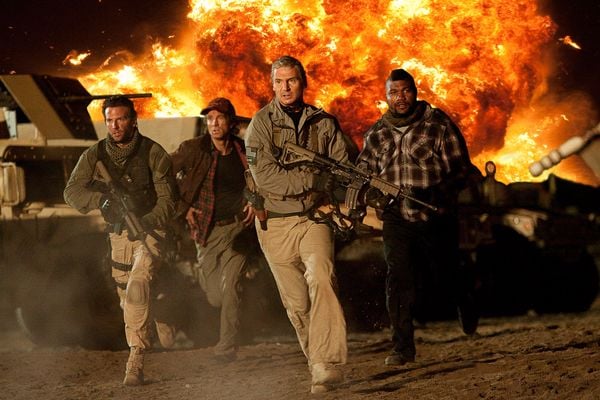 There are tons of crappy movies out there, but it’s been a long time since I’ve seen one as terrible as The A-Team.  My esteemed colleague Mr. Tassi didn’t think it was so bad, but this is one of those times where we really disagree.  I wasn’t expecting much at all from The A-Team; I was really just hoping for a fun action flick that didn’t take itself too seriously.  Apparently, that was too much to ask.  I don’t care whether or not there were inconsistencies with regard to the canon established by the television show – The A-Team was a flat-out horrible movie with no redeemable qualities whatsoever.  It’s even all the more pathetic when you consider that the casting was pretty damn good.  It’s been awhile since I’ve been so turned off by a movie, and only once before have a complained and whined in this type of post.

Below, you can read 20 reasons why The A-Team totally sucked.  Of course, there will be spoilers.  And yeah, I know, I’m a big baby who can’t turn his brain off and enjoy a fun action movie.  Whatever. 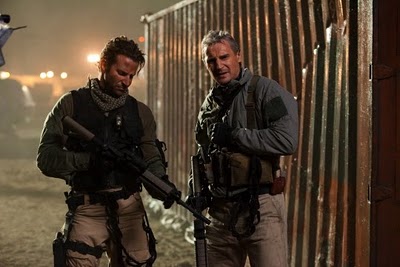 1. The dialogue.  There was nothing clever or funny about any of the dialogue.  It was atrocious throughout the entire movie; I couldn’t believe some of the things these actors were forced to say.  The most egregious offense?  Probably when Face said to Sosa, without even the slightest hint of irony, “God, I forgot how beautiful you are.”  Balls.

2.  The cliched villain’s monologue.  Of course, toward the end of the movie when Pike has a gun pointed at a helpless Face, he can’t just shoot him.  Nope, he’s got to ramble on like a moron so that B.A. can swoop in and save the day at the last minute.  This type of thing has become so cliche that it’s actually been referenced in dozens of movies.  Apparently writer Joe Carnahan hasn’t seen any of them.

3.  Pike couldn’t hit B.A. with a machine gun, but had no problem shooting a cable.  Amazing, right?  B.A. is dropping down the side of a building, and Pike unloads round after round of machine gun fire at what I think we can all say is a pretty large target.  Unable to make the shot, he instead fires at – and instantly hits! – a thin wire cable holding up a scaffold.  So is he a crack shot or isn’t he?  I guess it depends on the situation.

4.  Face encased in tires and rolling down a hill.  Hilarious.  I had to check my ticket stub and make sure I wasn’t in The Hangover 2. 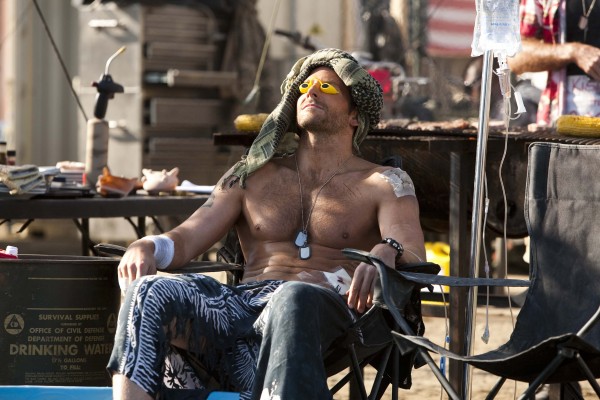 5.  Physics be damned.  Look, I know that in these type of stupid action movies, you can’t get too wrapped up in what is physically plausible.  I get that.  But I can’t buy for one second that firing a tank’s cannon while it is dropping from the sky is going to somehow soften the blow when it crashes into the ocean.  The tank’s velocity isn’t constant – it’s accelerating due to the force of gravity – and any recoil from firing the canon is going to be minuscule compared to the tank’s velocity upon impact.  This wasn’t an action movie, it was a damn Roadrunner cartoon.

What’s even worse is that at the end of the movie, when the A-Team is apprehended for breaking out of prison, Hannibal states that even though they were framed, “breaking out of prison is still a crime.”  Oh, thanks – I guess the budget wasn’t big enough for both a legal and a physics consult.

6.  Let the dogs eat him.  Really?  I know bad guys are supposed to be stupid, but Jesus Christ.  In the beginning of the movie, they can’t use their own guns to kill Hannibal and Hannibal’s gun won’t work.  Why not just cut his throat?  Set him on fire?  Suffocate him?  Nah, just let a couple dogs out and walk away.  Assume he’ll die and everything will go smoothly.  Good plan.

7.  Speaking of dogs, was B.A. one?  Because half the movie was spent trying to coax him into doing things by offering him treats.  Murdock was batsh*t insane and wayyy more of a potential liability than B.A., but you didn’t see Face and Hannibal bribing him with sweets.  Honestly, you could have replaced B.A. with a rottweiler and it wouldn’t have made a difference.

8. The crematorium.  This was one of many stupid plans throughout the movie.  Either Hannibal was faking being dead to escape prison or he was drugged so that he appeared dead.  Fine.  But if he was faking, why wait until the last possible second to spring up and emerge from the crematorium.  For crying out loud, the friggin’ fire had started before he jumped up.  And if he was drugged, well, that’s pretty damn convenient to wake up right when the flames are ignited.  Faking or drugged?  Who cares – it’s stupid either way.

Also, that’s a pretty quick turnaround time for cremation, no?  Aren’t there some forms to fill out or something?  Maybe, I dunno, HAVE A DOCTOR TAKE HIS PULSE AND PRONOUNCE HIM DEAD? 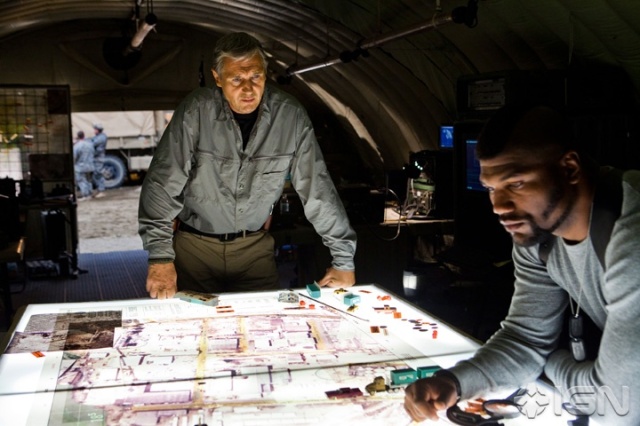 10.  That amazing trick at the end!  Honestly, did any of you, even for one second, not think that Sosa slipped Face a key when kissing him at the end?  It wouldn’t be so bad if the movie didn’t think this was the most clever thing in the world.  Like I was expected to fall out of my seat with disbelief as Face dramatically pulled the key out of his douchebag mouth.

11. Inconsistent Lynch.  No, I’m not talking about John Hamm’s cameo at the end.  I’m talking about how at first, Lynch seems like just some CIA dude, kind of dickish, nothign too bad.  But later, he’s all of a sudden the biggest a-hole on the planet, singing his lines and treating everyone around him like sh*t.  Uh, when did this switch happen?  There were times in the first half of the movie where he clearly didn’t need to maintain his front, so where was the douchebaggery then?

Ugh, I’m asking for consistency in characters in an A-Team movie.  I deserve to be punished.

12.  The action sucked.  If the action was good, I’d be willing to overlook all the horrible writing, dialogue, plot holes, etc.  After all, this is supposed to be a fun action flick.  But it’s not.  The action is awful.  Sorry, but Bradley Cooper hanging on a crane against an obvious green screen while poorly animated cargo crates drop from a sh*tty CGI ship doesn’t cut it in 2010.  It was worse than underwhelming – it was boring. 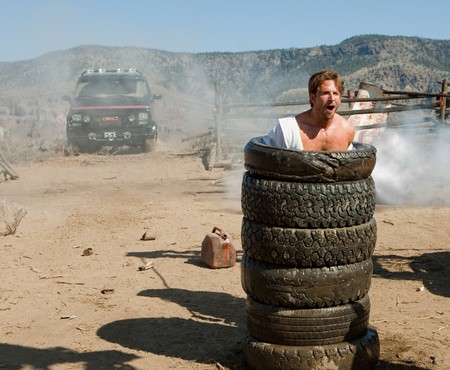 13.  Photo booths are soundproof.  When Face handcuffs Sosa inside the photo booth -which is located in a pretty high-traffic area – they’re fighting and struggling and she’s pretty loud.  It would be impossible not to notice.  But since the curtain was closed, I guess nobody did, and security was never alerted, and no Good Samaritans stuck their heads in to investigate.  Good thing, too, otherwise we never would have gotten the cheesiest line I have heard in years (see #1 above).

14.  The 3-D movie escape plan.  The chances of the hummer actually busting through the wall at the exact second the on-screen hummer…you know what, forget it.  Just chalk it up to another great plan coming together.

15.  How does a silencer work?  Really?  Lynch is ready to deceive the United States military and his right-hand man doesn’t know how to screw on a silencer (or suppressor)?  Was every villain in this movie supposed to be missing a chromosome? 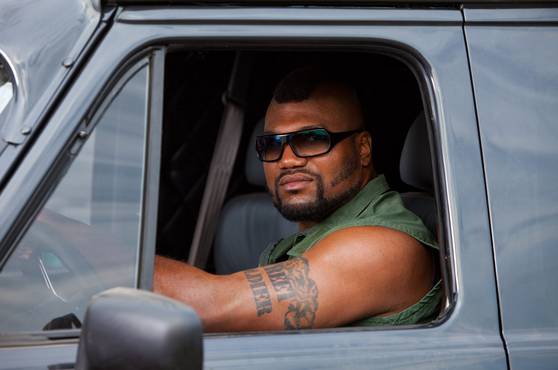 18.  Exposing Lynch at the end.  Who set up the crane to lift the crate in which Lynch was standing?  Wasn’t everything destroyed and shot all to hell?  And what timing, what with everyone gathered around and Lynch in the middle of his self-incriminating little monologue.  Good lord is Face a good planner.

There is not one “plan” in this entire movie that would not have resulted in at least half the A-Team members getting killed within one minute of its execution.

19.  General Morrison’s beard.  Yeah, this is nitpicky, but if you go a span of six months without shaving, you get a pretty thick beard.  You don’t, however, look like Osama bin Santa Claus.

20.  It’s just another hastily thrown-together pile of crap to tug on the strings of nostalgia and make some dough.  That’s it.  There was nothing fun about this movie, which I am convinced was conceived as a bunch of actions scenes that would later be tied together by a stupid, formulaic story.  From a marketing standpoint, the most important thing about this movie was the casting.  Once that was in place, it was just another case of cranking out a script, filming it, and putting it out there to assault the senses of the masses.

Even I’m surprised at how bitter and jaded I sound, trust me, but there really was not one single redeemable thing about the complete and utter abortion that was The A-Team. It’s amazing that even going into some movies with zero expectations I can still be disappointed.