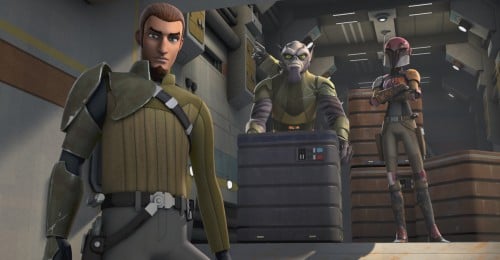 Rightly or wrongly, I sorta feel a responsibility to weigh in on significant pieces of Star Wars news. Probably because my taste in those movies is all wrong but so, so right. Star Wars Rebels is kind of the big story happening between whatever crazy scoops people have landed on Episode VII. The story takes place between the Prequel and Original trilogies, following a group of characters on the fringes of the infant Galactic Empire. Superficially, its semi-well put-together, with a brisk approach to action and dialogue weighed down by animation that’s honestly just kinda fug.

But that’s not what bothers me. I can deal with (or at least ignore) mediocre Star Wars television. The real issue I take here is that the Rebels pilot is really just fan service — likable fan service, sure, but fanservice all the same. In fact, by the end of its pilot, REBELS has clearly established itself as the most fan-wanky piece of Star Wars cinematic history to date.

So let’s start with the other main character, Han Solo. Or whatever his name is. The Han Solo analogue. His name is actually Kanan Jarrus, because hey, it already looks like a video game so it may as well sound like one, too. 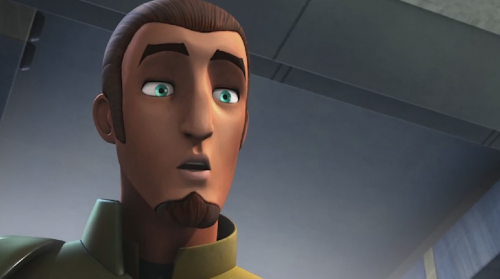 Kanan is your prototypical smuggler. Tall, handsome, good with weapons and vehicles. Initially you might dismiss him as a total jackass, but as the tough outer layers peel off, you’ll find a vein of kindness running to his renegade heart. He heads a ship full of renegades who — despite their differences — manage to look past their own self-interest and form something of a dysfunctional family.

That’s right. Kanan is the most original character of all time.

Okay, fine. It’s a type. There’s a lot of characters like this out there. And you can hardly blame Rebels for drawing from this particular well, as Kanan is the exact type of character that many feel the Prequels should have included. Someone a bit roguish and unpredictable. Someone who’s sarcastic sense of humor could balance out the overly serious Mace Windu types and the overly Jar-Jar Jar-Jar types.

Well, as one might expect from a fancy fan massage, Rebels grants this wish. In fact, most of its core team is made up of some riff on the smuggler model. They live on a poor, nondescript world on the edges of Imperial rule. I say nondescript because it doesn’t really have anything memorable about it. It’s just this frontier-y outpost thing with a little town and…

Ah-hah. I’ve complained about this video before, but it really irks me that these surface-level aesthetic considerations are what so many fans seem to worry about most. ‘Cuz you know what’s really interesting about those four rules? If you made a movie based off them, you’d basically get Firefly.

Which is pretty much what Rebels is. It’s Firefly with a Star Wars paint job. At this point, I could start listing comparison points between moments in the Star Wars Rebels pilot that seem directly lifted from various episodes of Firefly, but that would probably be its own article.

So let me instead switch gears and talk Force theology. Important question: What side of the Force are we supposed to think Kanan falls on?

This isn’t a flippant question; the war for the soul of the Jedi Order is one of the defining thematic threads that ties the Saga together. By combining New Hope-era Obi-Wan (a weary jedi outcast) with Han Solo (a flip smuggler), the show winds up with Kanan: the very first onscreen Jedi whose conscience is just fine with shooting some bastards if there are bastards in need of shooting. That he sorta-kinda has good intentions doesn’t at all change how casually he pulls that gun out. 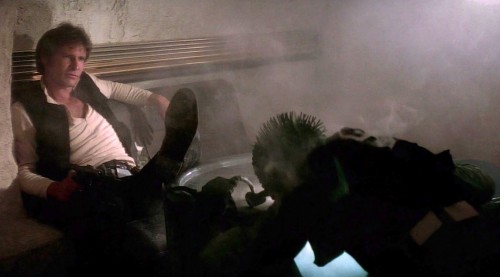 I suspect that the argument goes something like, this guy occupies a gray shade in the Force’s usual black/white spectrum. I know there’s a sliding scale; Both Skywalker boys dealt with that. The thing about the Force, though, is that the Dark Side is freakin’ seductive. The only good Jedi in the Saga are either extremely disciplined (like Obi-Wan) or inherently compassionate (like Luke). There doesn’t appear to be a sweet spot where the violence you commit just stops mattering.

I suppose there’s always the chance that Kanan will turn out to be the Malcolm X of the Jedi Order or something, but the show doesn’t appear to have that level of sophistication up its sleeve. I could be wrong. And maybe the show will address all of this later on, but that doesn’t stop it from seeming a bit… well, fan-pleasing. In the end. Again, everybody wants a lightsaber, and everybody wants to be Han.

Anyway. Let’s get to that main character, and the real point of all this semi-myopic bitching (or semi-myopic insight, for those still on my wavelength). 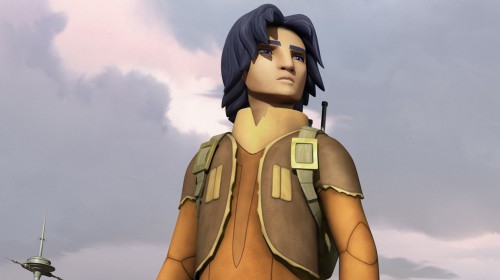 The main character — who goes by Ezra Bridger* — is a bit of a problem for me. No, it’s not that he’s basically just Aladdin; it’s a beat that plays right at the end of the episode. The final scene of the pilot shows his home. Basically, it’s a one-roomer with a collection of stormtrooper helmets, among other things. If you’ll permit me a bit of artistic interpretation, it’s the room that holds his collection of Star Wars memorabilia.

Earlier, Ezra stole Kanan’s lightsaber, because (again) he’s basically Aladdin and planned to put it into his collection. Ezra’s kind of a douche (he’s basically Aladdin, if I haven’t said that already). Our hero is in luck, though, because Kanan comes back. Not only that, he offers to train the kid in the ways of the Force.**

Did you catch that?

This kid is literally a Star Wars nerd who gets an invitation to be a Jedi Knight. Not one of those boring Jedi from the Prequels, though. A cool Jedi, like Han Solo.

So yeah… this one’s for the fans in a bad way. I didn’t even get into the more minor stuff, like the copy-paste sound design or the Mandalorian helmet or the facepalm-inducing quotation of Ackbar’s infamous “It’s a trap!” line. This fan, however, isn’t interested in nostalgic button-pushing. In the words of a couple Phantom Menace characters, “I need something more real,” or else you can “Count me outta this one.”

*I guess no one ever accused Star Wars of having a subtle naming system, but this one seems particularly clunky to me.

**Because, oh yeah, even the show about the time where there were no Jedi can’t help but contain a surfeit of lightsaber stuff. People complained about all the Jedi in the Prequels, but at least those movies were about the Jedi Order. You’d think Rebels could make it at least a couple episodes.

As you may have noticed, I don’t review Sons of Anarchy on a weekly basis as I usually only do that with one show at a time. But with the way this season of Dexter… 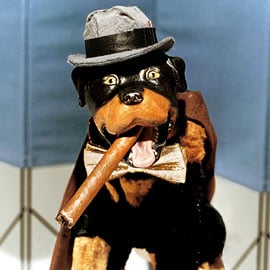 One thing that always made Conan O’Brien’s talk show better than the others – in addition to Conan being, quite simply, much funnier than the other hosts – was the quality of the bits before…

Adventure Time is currently in my “cartoons that seem ridiculous but somehow are supposed to appeal to guys my age” queue, now that I’ve finished with over a dozen episodes of My Little Pony: Friendship…

There is truly an epidemic going on worldwide right now and it seems very few people are properly addressing it. It has happened to all of us, but we are all too ashamed to even…

httpv://www.youtube.com/watch?v=hFjwbKMlmF4 Sure, we may steal great shows like The Office from England, but we give them our classics like The Fresh Prince of Bel Air. I wasn’t aware the show had that many fans in…