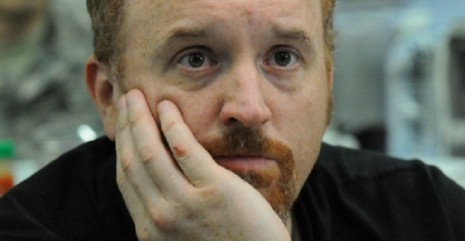 I’ve mentioned before how much I appreciate standup comedians, and I can’t tell you how happy I was when I heard Louis C.K. was giving primetime TV another shot in 2010, only this time on FX instead of HBO. I loved Louie from the get-go, and if pressed, I’d probably describe the show as Seinfeld’s general format + Curb Your Enthusiasm’s penchant for painfully awkward scenarios + Louis C.K.’s personal brand of dark humor.

What I love most about the show is how organically various characters react to situations that, while sometimes implausible, are very much grounded in the real world. Here are six of my favorites so far.

Louis C.K. has always been fearless when it comes to broaching uncomfortable situations, and black comedy is definitely his niche, but the narrative could have taken a truly dark turn in the second half of this episode.

While out on a semi-promising date, Louie is harassed by a group of high school ne’er do wells, and one jock degrades him in perhaps the most emasculating way I can imagine: while showing off for his friends, the cocky little asshole makes Louie beg him—more than once, mind you—not to kick the shit out of him, ending Louie’s night on an irreversibly sour note. And while his date’s brutally honest reaction is also kind of bitchy (really, lady? After what the poor guy just went through you couldn’t put on a brave face and throw him a sympathy kiss at the end of the night before “losing” his number?), it’s tough to blame her for being turned off by the whole scenario. As a NYC resident, I’ve witnessed similar confrontations firsthand, and the authenticity of this scene was spot-on excruciating.

But the night doesn’t end there. After putting his date in a cab, the comic stalks that belligerent brat all the way back to Staten Island. Louie is technically a comedy, but I felt uneasy as this balding 40-something followed a teenager to his house; I didn’t expect actual violence to break out or anything, but I couldn’t really guess Louie’s end game when he knocked on the front door. As it turns out, he was just trying to be a good (albeit creepy) Samaritan by alerting the kid’s parents of his extracurricular activities, which is actually very organic to Louie’s character. And how do the parents react to this news from a complete stranger in the middle of the night? About as naturally as you’d expect, and the subsequent connection Louie makes with the father is oddly powerful to watch.

I rarely discuss religion in public forums, and since I wasn’t raised Catholic I don’t have much authority here anyway. Still, I think this episode offers a fascinating take on the Catholic school experience. I assume the faculty’s grim personas are (comically?) hyperbolized, but here’s the thing: Protestant or Catholic, if you’re raised in a strict, conservative Christian home, the concept of Christ dying for your yet-uncommitted sins is impressed early on; original sin is something you’re sort of grandfathered into. That can be a whole lot to handle at a young age. Overwhelming, even. All of Young Louie’s doubts about Christianity surface during that car ride with his mother, which addresses an incredibly complex topic: deciding how (if at all) to properly introduce your child to religion if you yourself aren’t religious.

And holy shit, I hope I’m wrong, but that entire sanctuary scene doesn’t seem terribly far-fetched in the real world. If that’s not childhood trauma, I don’t know what is.

S2 e05 – Louie rocks out with his daughters to The Who

They don’t get a ton of screen time, but obligatory visits to extended family members are a part of most childhoods. And it can be scary/uncomfortable meeting new people when you’re a kid, even if they’re supposedly related to you. Especially if they’re old. Those ones are the worst. (Don’t even get me started on the smell—that earthy oldiness hits your lungs like Industrial-Era smog. It doesn’t wash out of your clothes, either.)

In this episode, Louie takes his daughters to see just such a relative: his great-Aunt Ellen. During the car ride there, he gets jiggy to “Who Are You” for three full minutes, which seems a little excessive on paper (carrying a tune isn’t really Louis C.K.’s thing, at least not in the show). This scene could have gotten real old real fast, but as is I thought it depicted a very real, very engaging interaction between a loving middle-aged father and his kids.

httpv://www.youtube.com/watch?v=BvHXzP2SpLA I’ll be damned if I watched them, or even looked up who won until now, but some of you may care who ended up winning the Golden Globes last night, and if you don’t…

Mike Benner, writer for Bob’s Burgers, just shared this rather awesome Guardians of the Galaxy mash-up piece on his Twitter. I can’t tell if this is fan art, or something the official team whipped up,…

There was a very dark day in December 2013 when it was announced that Ripper Street would not be returning to the BBC for a third series. There was a cloud of darkness that swept…

Well how about this? I knew we were using Kickstarter to fund video games and probably-going-to-fail consoles, but full length feature films? That’s a new one. But it’s exactly what’s happening now. As of last…

Way back when I first started reviewing Breaking Bad on a weekly basis, I made the rather prodding statement that I might have less to go on with this show, as “not that much happens”…