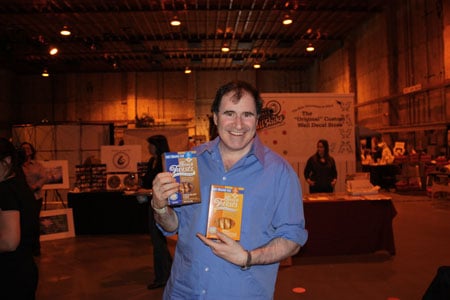 I want to thank Richard Kind for bringing a new idea to the table.  I’m sure you’re all familiar with character actors.  And obviously you know the leading role type actor.  But Mr. Kind brings us a kind of actor that I like to call “filler actor.”   What does this mean exactly?  Well a filler actor is the kind of guy who doesn’t really matter much in the grand scheme of things but he’s a good guy to have around.

In fact, he/she is kind of necessary because with out him/her you might have too much star power and not enough diversity in a film.  Kind always seems to deliver in that role.  In particular I liked him in Vice Versa and Nothing in Common.  But Kind has been around.  It’s mostly TV now but the dude has 125 credits to his name.

And I’ll bet you didn’t know his name but you knew his face right?  A clip of kind after the jump….

The interviewer is unreal.  Who the hell is this guy?

What’s the longest stretch of time you’ve actually sat down at your computer and not gotten up?  For me I think it was a 14 hour stretch where I think I nearly fainted when I…

At first, BoJack Horseman is a fairly simplistic, consistently clever little satire of Hollywood superficiality, a familiar story told through the lens of the absurd world it was set in. BoJack, a former 1990s sitcom…

I was lucky enough to be raised by a Mom who owned an absolutely beautiful used book store, and much of the joy of my childhood came from finding and reading books I probably shouldn’t…

And now, it’s time for The Danger to run, because The Danger is about to get eaten by 10 chests full of eyeballs.

There are some people who look at coffee tables and think to themselves “put magazines on and have a place to rest my feet and remote.”   And then there are others with a more creative…

I realized the other day that it’s been a while since I’ve seen Austin Powers:  International Man of Mystery.   And I also realized that it’s one of those movies that has staying power.  Some movies…