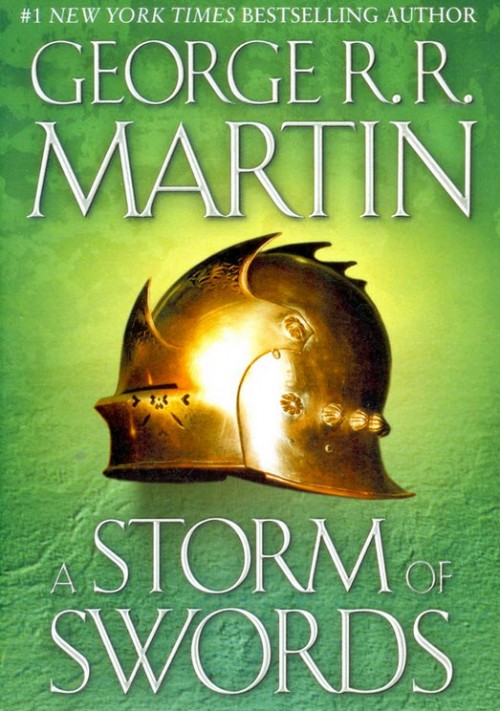 Well, despite their ever increasing length, I see to be blazing through George RR Martin’s A Song of Ice and Fire series. Now that I’ve started, I can’t seem to stop. I’ve wanted to write a post about my thoughts regarding each book, and at the current rate, I’m finishing one about every week or so. Only two to go!

With A Storm of Swords I’ve finally gotten ahead of the show, which has changed the game entirely. I sort of drifted through the first two, which were well written and engaging, but not exactly pulse pounding as I knew what was coming. Not so with A Storm of Swords which is not only the most action packed book of the three I’ve read, but since I didn’t know what was on the horizon, it was a real page turner. I must have read five hundred of the 1000+ pages last night alone, as once you get past the halfway point, everything goes to hell.

It’s easy to see how the show is planning on breaking up the mammoth book into two seasons at least. There’s simply so much that happens, it’s just not feasible for ten episodes. But twenty? Perhaps.

The book also has a nice breaking point where it’s easy to see how this season will likely end. About midway through, there are a pair of weddings with a corresponding pair of character deaths, the most major we’ve seen since Ned Stark lost his head. Might as well discuss those first as they’re the biggest events of the books.

I only saw the Red Wedding coming a few minutes ahead of time. As soon as Grey Wind started growling at the Twins’ gate, I knew something was up, but it wasn’t until Catelyn found the mail armor under the Frey’s cloak that I had that big “oh shit,” moment which I’m sure happened to everyone reading. The complete slaughter of the Northmen was astonishing to behold in those pages, from the hacking to death of Robb’s bannermen to the musicians pulling out crossbows and filling Robb and Catelyn full of bolts. Despite talk of deals and mercy near the end, I knew Robb was going to die. Looking back, I probably should have known it was coming given how important they were making Sansa. The story pretty much assumed he was going to die, in retrospect.

I was extremely perplexed about Catelyn’s fate after the whole ordeal. The chapter ends with her taking a knife in the throat, and for the rest of the book stories are told of her corpse being stripped and thrown in the river. But I always had a nagging feeling she’d survived. Only in the ending pages of the epilogue do we see that she lives, a horrifyingly disfigured version of herself. Her injured throat won’t let her speak, and she clawed her own face to ruin with her nails out of madness as her men fell around her.  That’s going to be one HELL of a transformation for her character.

I didn’t care as much for the way Joffrey’s death was handled. I knew he was going to die going in this book, and I knew he was poisoned. I had also heard the phrase “Red Wedding,” and assumed it was a reference to his wedding, not the Tully-Frey affair. But he died at his own wedding anyway, and that was the final spoiler ruined for me that caused me start reading these books in the first place.

But that wasn’t why I didn’t like it. For a character you hate as much as Joffrey, you wanted his death to sweet retribution for all his assholery. Instead it was a rather confusing affair that had him choking to death, only to later learn he was poisoned by…who exactly? 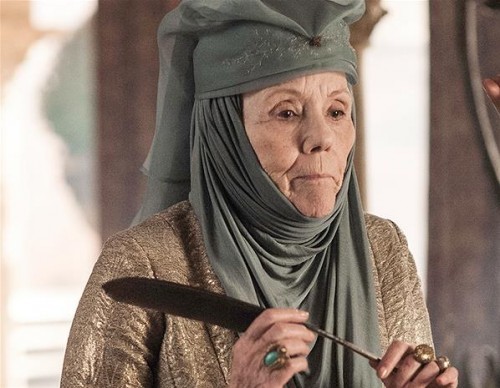 It was supposed to be a mystery for a while, but the events of the night slowly revealed themselves. From what I can gather, Petyr Baelish conspired with the Tyrell Queen of Thorns to kill Joffrey. Sansa’s hair net was made of Asshai amethysts that were either darkly magical or just straight up poisonous, I’m not sure which. The Queen of Thrones pulled one from her hair as she straightened the net, and then either she or Maergery put it in Joffrey’s…wine? Pie? I’m not sure.

I’m also not sure why any of them did it, given how many other people have reasons to hate Joffrey and the Lannisters. It would have made sense for the Martells to do it given their past history with the Lannisters, but the Tyrells? The best I can figure is that the Tyrell matriarch didn’t want Joffrey to abuse the shit out of her granddaughter, and figured Maergery could wed the more mild Tommen eventually anyway. Petyr Baelish is attempting to coalesce power, as seen by the shocking end to his and Sansa’s saga where he throws Lysa Arryn out of the moon door at the Vale. I suppose he’d rather try to outmaneuver an eight year old king instead of a bloodthirsty, possibly insane teenager. I agree with Varys that Littlefinger is possibly the most dangerous man in the seven kingdoms.

I’m glad Joffrey is dead, I just wish that Sansa had been in on it instead of a mere pawn. I suppose without her the plan couldn’t have happened the way it did, but she deserved actual revenge for all Joffrey did to her.

Poor Tyrion got blamed for the murder, as he seemed like the most obvious suspect by a mile with his Stark wife fled and he having threatened the king multiple times in the past. I knew he would escape death, even after he lost both his regular trial and trial by combat, but I did NOT expect his revenge murder spree, choking the spy Shae to death with her own necklace (she was a spy the whole time, right?) and plugging a crossbow bolt into his own father Tywin before he made his escape. Tyrion was not fucking around by the end of that book, and I can only imagine what he’s going to do now.

Though few things worked out well for the Starks during the course of the book, Jon Snow actually ended up in a pretty excellent position by the end. I was surprised to see him betray the wildings so quickly and see Ygritte die before his eyes that soon. She seemed like she’d be sticking around for a while, but this is Game of Thrones I suppose.

Now by the end, after Stannis drove off the wildings, he offers Jon Snow Winterfell and the chance to be Jon Stark through a kingly decree. But then he’s also been voted Lord Commander of the Knight’s watch by his brothers, so there’s that to consider. Look who’s Mr. Popular all of a sudden. It seems he’s leaning toward the Night’s Watch, but who knows. Also, wasn’t it Robb’s dying wish that he rule Winterfell in his stead should he die? (yet another red flag that he wasn’t long for this world).

Arya and Bran spent most of their time simply wandering around during the book, which had much more exciting adventures for the rest of its characters. Arya’s story was pretty good, first traveling with Dondarrion’s men, then eventually The Hound where the pair of the made an oddly endearing couple. By the end, Arya’s gone full murder mode, hacking to death some of Vargo Hoat’s men to help save The Hound, but she later abandons him to go north. Her getting Needle back at the end was probably the best moment of her entire story during the book.

Bran’s plotline was inexcusably boring. In a thousand page book he quite literally did nothing but march north with the Reeds and Hodor. I guess we got a bit of Westerosian history from the group, but this was obviously the dullest plotline of them all. I am curious as to who this “Coldhands” is, and what exactly Bran’s significance in the story going forward. Hopefully it’s something more important than what he’s been doing. 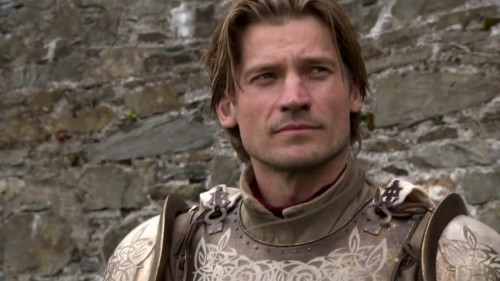 The most surprising character of the book was without a doubt Jaime Lannister. It’s amazing to watch Martin transform him from villain into hero, and the loss of his hand has really altered his core. Seeing him going back for Brienne and rescuing her from the bear pit was a great shift for his character, as was his freeing of Tyrion at the end. His internal monologues about his place in the world now and his legacy were among the best scripted thoughts of the whole series so far.

Daenerys certainly had more to do in this book than she did in the last, but her story still wasn’t quite satisfying. She seems SO disconnected from the rest of the world, it’s like you’re reading a different book entirely. And in a thousand pages, she only has about four or five chapters to herself. She gets her slave army, sacks a few cities, learns who Barristan the Bold is and figures out Ser Jorah once was selling her secrets. But that’s it, and I don’t really have high hopes for her character in the next book either. As soon as she said she was staying in that random city “to rule” I knew it was going to be ages before she’s anywhere close to Westeros.

Now, what’s next? Hard to say, but I’m starting A Feast for Crows shortly, and you’ll probably see another one of these articles next week. I anticipate the Bastard of Bolton and his clan being elevated to uber villain status based on the fact he’s already popped up on the show tormenting Theon. It seems odd they’re bringing him into the fold this early, considering he’s barely mentioned at all in A Storm of Swords, and despite being a chapter POV person in the last book, we don’t hear from Theon at all.

I hear the best books are now behind me, which makes me sort of sad. I’m not sure why people don’t seem to like the next two as much as the others, but I guess I’m about to find out.  Perhaps they’re not as bad as everyone says. Even a bad Ice and Fire book is still probably pretty good, no?

Anyway, I welcome discussion about anything and everything I’ve talked about in the comments, just avoid spoilers for the next two books please.