Last weeks episode of Broadchurch decided to rock the residents of the sleepy town once again with Joe revealing that he has decided to plead not guilty as he wants to escape a prison sentence, ensuring that the characters (and us) would be put through an agonising but incredibly entertaining trial. We were also introduced to an investigation that Alec Hardy was conducting before relocating to Broadchurch, concerning the disappearance of a teenage girl and the murder of another, Hardy’s prime suspect being the delightfully creepy Lee Ashworth. Episode 2 doesn’t hold back and we push full steam ahead with both the court case and the new investigation into Ashworth as he has decided to return and reclaim his wife. And to drive Hardy a little bit crazy too.

The casting for season two has been fabulous, the highlights being the new lawyers for both the defense and the prosecution. Sharon Bishop is Joe’s new savvy defense lawyer who played wonderfully by Marianne Jean-Baptiste. Honestly, I hate her already and we’re only two episodes in. At the end of the last episode Danny’s body is exhumed in front of his friends and family who could only stand by and watch, and the new autopsy discovered nothing new with Bishop stating it was only to rattle the prosecution. From that point the audience could tell that it wouldn’t be a fair trial and that the defense would be fighting dirty, evidenced throughout the courtroom scenes, and unfortunately it seems like it’s working. They manage to get the confession that Joe provided thrown out due to Ellie attacking him AFTER he had already provided it, insinuating that he had confessed under duress. She’s also attempting to cast suspicions onto other members of the community through her cross examination with Beth Latimer, the pregnant grieving mother of the murdered child. I get it, lawyers are horrid people, but how low can you sink? Is there no ounce of decency or compassion? Is the press that she is receiving from representing Joe really worth putting the family through more agony? She exposed Mark’s affair with Becca Fisher and the fact that he had once hit Danny, so is she going to shift the blame onto Mark? Or is she creating reasonable doubt in an effort to get Joe off? Well I look forward to seeing it play out.

Sharon isn’t the only lawyer we were introduced to last week, we also found our prosecutor in Charlotte Rampling’s Jocelyn Knight. Forgive me if I’m wrong but the victims families don’t usually pick the prosecutor do they? Well even if it is factually wrong she is a welcome addition to the cast. Jocelyn was clearly apprehensive about taking the case on last week but she was pursued so doggedly I believed she would be a super lawyer but I didn’t really see signs of that this episode. Perhaps it’s her getting used to practicing again but she didn’t make too much of an argument to keep the confession as evidence and didn’t really make much of a case from what we saw in the courtroom. Maybe she’s being tactful? I hope so because I want to see justice. Sharon has made me despise her already but from the little we’ve seen of Jocelyn I’ve grown to quite like her and find her an intriguing character purely because she is hiding something. When the community came together in the hopes that she would help them understand would would be happening in the trial she completely freaked out, I get it’s unethical but you would expect her to walk out and not have the harsh reaction she did. That coupled with the fact that she didn’t want to take the case in the first place there is most definitely more to Jocelyn that meets the eye.

Speaking of hiding something lets briefly discuss the residents of Broadchurch. I was saying last week how they’re community and their ability to unite in times of trouble was one of the strengths of the show and they united once again this week. They’d all been summoned to court to give evidence and stupidly thought that they should have a get together to discuss the upcoming trial. As if the defense won’t spin that in a seedy way when they find out, and it’s television, they always find out. A beautiful part of this scene was the pan across the faces of all the characters connected to the case while Beth says “none of us have anything left to hide” which pretty much tells the audience theres plenty more skeletons that are going to come tumbling out of their closets, one of which will probably be Marks growing relationship with Tom Miller. 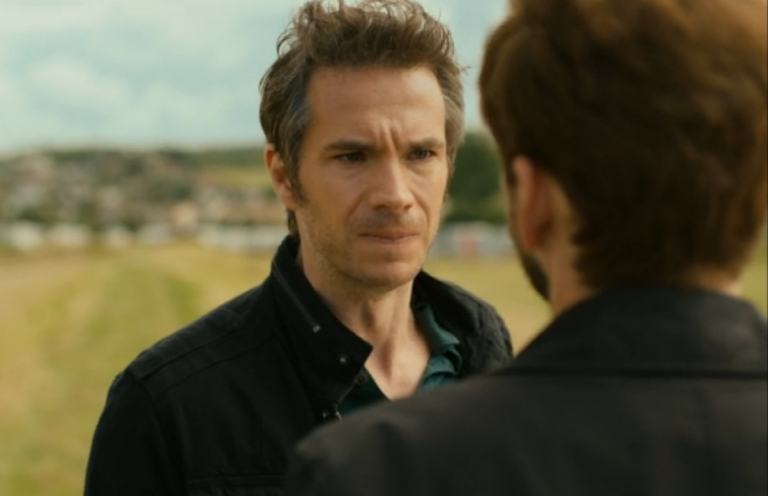 I think I’ve given you the jist of the courtroom antics so now I will shift focus to the other main storyline of season 2, Alec attempting to prove Lee Ashworth’s guilt. If you’ve watched the last episode or read my recap for it then you’ll know Ashworth was the suspect in the case Hardy was working on and Hardy is now hiding Claire, Lee’s wife, in Broadchurch after she testified against him. Ashworth managed to be found not guilty and now he’s back, and in this episode he says all he wants to do is speak to his wife. Who testified against him. He definitely isn’t mad at her and out for some sort of revenge. Alec being the brilliant and intelligent detective we’ve grown to know and love decides that this is actually a good idea, and a way to coax a confession out of him which he would tape without some sort of a warrant. I didn’t study law but even I know that the tapes wouldn’t be allowed as evidence. And I’m not a detective and I know that staging a meeting is a bad idea! It parallels the meeting between Ellie and Joe where she beat him, that hasn’t exactly done any good has it. When they were discussing it I was just knew that it wasn’t going to go to plan, something terrible would happen.

Ellie managed to get Claire to agree to the meeting and according to Hardy the only place they could possibly have it was Ellie’s house. Lee and Claire make it there without issue, and Lee checks Claire for a wire by unbuttoning her top in an incredibly creepy fashion but before they could actually talk the two storyline’s of the season collide with Beth’s arrival. Beth discovers that Ellie is back in the area and decides to confront her as it was her mistake that had gotten Tom’s confession thrown out, and of course she goes in to labour while doing it. This distracts both Ellie and Alec who are supposed to be keeping an eye on the Lee and Claire but they slip out in the commotion, and even though Alec was only distracted for a split second there is no sign of them on the street when he runs out, where could they have possibly gone?

If you hadn’t noticed I had a bit of a sarcastic tone during the last half of this post, purely because in the first episode I thought the new investigation was captivating and the casting of James D’Arcy was genius. I’ve never seen him in a role like this but he completely owns it, he is both mysterious and utterly creepy throughout his scenes and I want to see more of him. However in this episode the events surrounding the investigation felt quite contrived, he is able to track Alec who is a police officer yet doesn’t follow him to Claire? He manages to get Claire’s phone number but doesn’t find her address? And why on earth was the meeting at the Millers? The moment I realised I knew that something with a Broadchurch resident was going to happen. Everything was a little too convenient wasn’t it? It could have almost ruined my viewing experience but thankfully we had the courtroom drama to fall back on. I haven’t lost complete faith in the Sandbrook investigation, I still want to know what happened and why Alec is so certain that Lee is the killer. I’m starting to believe he isn’t, the wife has put me on edge this episode from the moment she said that Lee was only rough with her when she asked I knew she wasn’t all she seemed in the first episode. That and theres no way that the Ashworth’s could have gotten out of the Millers house if Claire hadn’t co-operated, I have a feeling that she may know more that she is letting on. Maybe she is the one responsible for the murders?

Although some events felt forced episode 2 of Broadchurch was enjoyable enough. I’m more glad than ever that they kept the Broadchurch setting and decided to explore the fallout of Danny’s murder as well as start a new investigation because it was pretty much the saving grace of this episode. The Sandbrook storyline was far from atrocious but I expected a lot more from a drama that has proven itself to be great, but we’ve still got several episodes left so me being irked may all be for no reason. I hope it is. We’ll see next week!