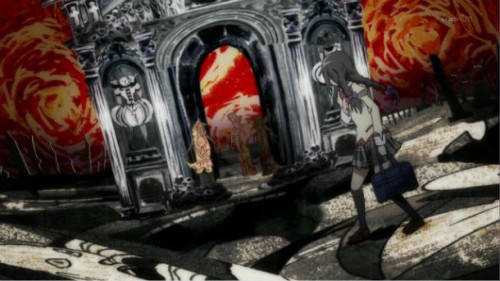 Every so often you get a story that not only transcends beyond the limitations of its chosen genre, but deconstructs it; devastating the tropes that define it in a way that resounds indefinitely. Watchmen did it for superhero comics, Scream did it to a lesser extent for slasher films (before becoming a joke itself with unnecessary sequels), Neon Genesis Evangelion did it for mecha, the Grand Theft Auto series routinely does it for third-person shooter video games, and for magical girl anime there’s Puella Magi Madoka Magica.

Part of what made this show so brilliant was the way it was presented and marketed in a way to catch the audience completely off-guard. For those not into anime, let me explain. Magical girls are invariably upbeat, saccharine girl-power heroines with powers fueled by love and kittens who spread joy to the world by beating cartoonish baddies with extra-sparkly magical powers while navigating the social perils of high school like supercharged Hannah Montanas. Surely you’ve at least heard of Sailor Moon. So when you go for a magical girl anime, you aren’t expecting something that’s going to challenge you intellectually. You’re looking for something like this:

And if you’re anything like me, you just watched that trailer and thought “BORING!” But given the insane praise the show received (its Netflix rating is comparable to shows like Breaking Bad and Dexter and it’s on about every best anime list of the last few years), I decided to give it a shot and went in blind. I’m going to get into the themes of the story pretty in-depth during this review so if I’ve piqued your interest already at this point you may consider spending a few hours binge-watching the show’s twelve episodes before you finish this article. Pretty much any information regarding the story of Magica Madoka could be tantamount to spoilage, although I’ll avoid specifics.

Still here? Let’s do this. The premise is that a Pokemon-esque creature named Kyubei grants wishes to girls with “potential” who then become magical girls. Yawn. But there are aspects of this series that are borderline revolutionary right off the bat. While the opening credits and first episode carry on the charade of a typical girlie anime, it doesn’t take long before things get unusual with our heroines.

It is the duty of magical girls to patrol their territory in search of witches, who represent the evil in the world. They cause people to do horrible things as well as natural disasters, car crashes, and possibly Michael Bay films and Nickelback albums. If it’s really bad, blame a witch. All standard operating procedure. Until you meet the witch. It’s not your usual My Little Pony villain. These things exist in pocket dimensions called labyrinths that can’t be described in any other way than Lovecraftian.

The witches themselves as well as their dimensions are put together using a variety of animation techniques that make them extra-creepy and otherworldly compared to the stylish manga-anime style of the rest of the world. It’s visually striking to say the least and unlike anything else I’ve ever seen. This aspect alone makes this show something every animation fan should check out. 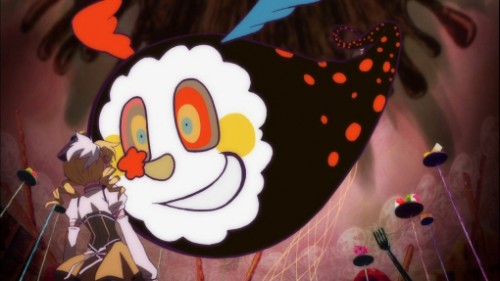 Helloooooooo there! They call me Mister Sprinkles and I’ll be the one devouring your soul tonight!

As the story hurtles along, more and more layers are added to it until the bleakness is almost overwhelming. What is the real cost of the girls’ Faustian bargain? Well, for starters, each girl possesses a soul gem which becomes corrupted as they use their powers. The only way to purify it again is to kill a witch, which drops a grief seed which sucks the corruption out. It’s not too difficult to guess what happens when a soul gem becomes entirely corrupt.

So basically, the girls have to constantly kill witches, and when territories overlap they often need to compete against each other to keep their gems pure. They also need to allow witch larva (called familiars) to mature into full witches by killing humans so that they can get a grief seed, otherwise they risk the very power they use to save those lives corrupting them. In order to survive, magical girls must essentially cut each others’ throats while standing by and letting people get killed in pursuit of their own interest. Still sound like crusaders of love and justice to you?

As more and more of the mysteries of Madoka Magica’s world are revealed, we start to see things in a very different light. What was cute suddenly seems menacing. In most stories when a character’s motives are revealed to be sinister, they begin behaving in a cartoonishly villainous manner, but in this case the behavior doesn’t change at all. It’s only our perception of it that has changed due to proper context. That is very high level storytelling.

And there’s plenty more to go around. A shocking amount of material is crammed into twelve episodes here. I don’t know how they managed so much character development while juggling space-time metaphysics, philosophical and moral quandaries, stunning action visuals, and general anime goofiness, but they also managed one of the finest soundtracks I’ve hear in a long time. Moody classical pieces, fluffy J-pop, and rock guitar don’t usually go together in a seamless bundle, but they managed it. This is far from a typical show in any sense.

Which takes is back to the start. Normally, you’d market something like Madoka Magica as some visionary piece of art with dramatic trailers and suitably dark and bizarre imagery to help it find its target audience. Instead, they chose to target the last people who would seek something like that out and tricked them into watching something intellectually stimulating instead of the syrupy crap they were looking for. As the show progressed I kept thinking how utterly misleading the opening credits were, and it’s only after I read up on the show afterwards that I understood why. It’s kind of wonderful when you think about it, and I don’t think it’d ever fly in America where most trailers choose to give up the entire plot of a film or show right off the bat.

Here’s a great fan-made trailer that better captures the aesthetics the show if not the tone.

The television series is currently streaming on Netflix, and has since been made into a film trilogy with the first two movies recapping the show and the third being all new material. I haven’t seen the films yet, but the third one will definitely be on my to-buy list when it gets a North American release. And if you’ve any interest in anime whatsoever, Puella Magi Madoka Magica is as good a reason to fire up your Netflix app as you’re going to find.