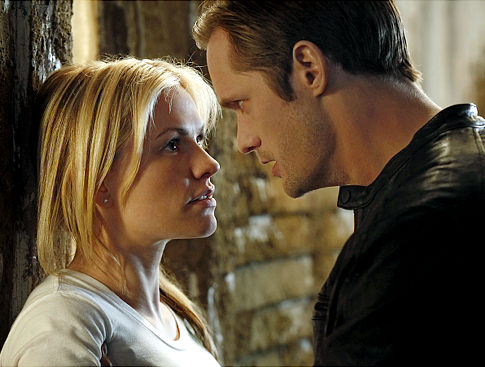 For various reasons, I was behind the times with True Blood this season, and only recently did I sit down and get through season three. I know our own Madison reviewed each episode every week, and I’m working my way through those as we speak, but I just wanted to share some of my own thoughts about the season.

I thought it started out pretty strong, and was better than the Maryanne craziness of season two, but ultimately fell apart for a number of reasons, and I’m worried for the future of the show, as I think it’s just running out of ideas.

Nothing intersects. There were two distinct plotlines in season two, the Fellowship of the Sun kidnapping Godric, and Maryanne’s mind control of the town. This season? It seems like practically every single character has their own story, and none of them have anything in particular to do with each other. Read on to see what I mean. 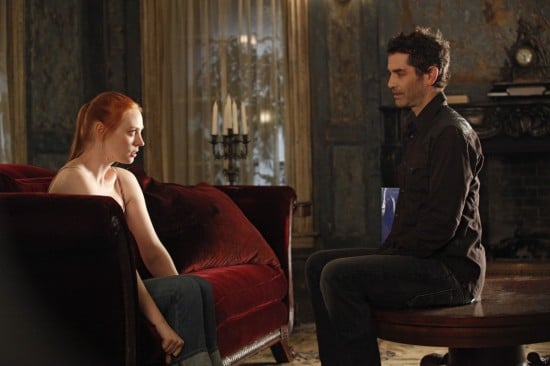 Don’t mind me, I’m just here to be British and creepy and give Tara something to do for 12 episodes.

Tara’s tale of being kidnapped by Franklin had barely anything to do with Sookie and Bill’s adventure, and it just made her jumpy and whimpering all season. I know the psychological effects of rape are a big deal, but it more or less took her character out of the equation the entire season.

Sam meeting his family was initially interesting, but ultimately stupid. The father had his shapeshifting wife and son enter dogfighting contests? That’s incredibly retarded. They even showed a flashback which had Sam as a master thief in his glory days with his ability to turn into small creatures. There has to be a million different ways to make cash with that ability, and dogfighting just didn’t make any sense. Sam kicking his brother out because he was drunk once and having him come back and rob him was a stupid climax to that family drama. And note, this had nothing to do with anything else going on.

My least favorite subplot of the season was Jason Stackhouse’s adventures with the werepanthers. WEREPANTHERS? ARE YOU KIDDING ME? I was excited to see Jason becoming a cop, but then these stupid inbreds came along and ruined that whole plotline. I HATED that stupid girl he was always trying to impress. Note that in the entire season, only one of them changed into a panther, and didn’t do it for any particular reason other than to show that it was possible. Why couldn’t they have just been a commune of inbred family members supported by drug dealers? Oh, because this is True Blood, that’s why, and everything has to be magical. 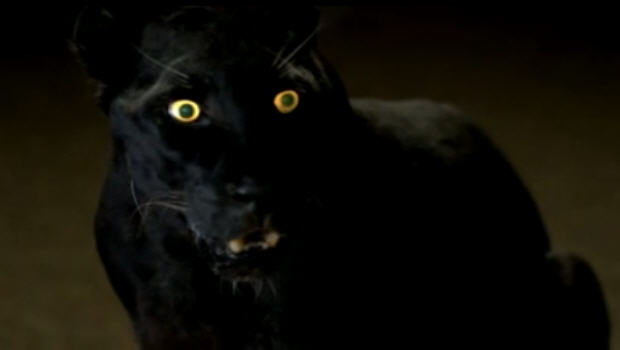 This leads to Lafayatte’s adventure, where he finally meets a nice guy named Jesus, and a bad V trip reveals to him that his own grandfather was a voodoo witch doctor, and Jesus has actually been trained to be a witch. I assume this will come up more in the next season, but I feel like between this and werepanthers, we’re really stretching for more supernatural beings here. I was really fine with just vampires and shapeshifters in season one to be honest.

Werewolves are f*cking stupid. Yeah, I said it. In True Blood, they have no real powers, except when they’re hopped up on V. Tell me why it’s better to have a bunch of wolves patrolling your grounds than say, a bunch of humans with assault rifles? Bullets travel faster than wolves after all. They’re just a lesser form of shapeshifters, as Sam could change into a wolf if he really wanted to. He could also probably change into a bear or a lion if he saw one, making him way cooler. The wolves here just weren’t at all powerful, and never felt like a real threat. 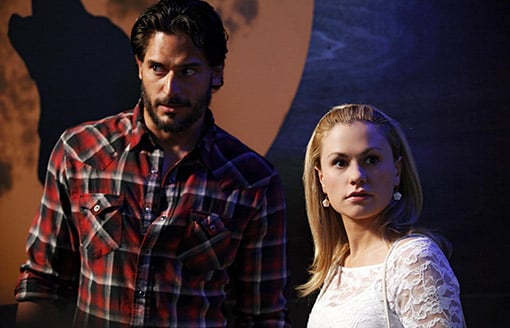 I liked this dude’s character, but werewolves are just awful at everything.

The main plotline of the season was Sookie, Bill and Eric’s involvement will Russell, king of Mississippi. We discover that Sookie is part faerie (not fairy), which is implied is a race of aliens with telepathic and telekinetic powers that the vampires wiped out centuries ago for their delicious blood.  Sadly, out of all the craziness in this season, this was the new breed of creatures I found most believable.

I did not understand Bill Compton at all this season. He went  bad, then good, then bad, then good, and I guess it was all to protect Sookie, but it never really made all the much sense. Then at one point he attacks her because she was healing him and he lost control. Hasn’t she healed him with her blood from near death a few times? Why was this time different? It felt like a plot device.

The end of this season was just awful. Eric hatches a rather brilliant plan to kill Russell, but then a vision of Godric appears and tells him to forgive him. That’s all well and good, but the minute he’s healed he’s going to rip the heads off him, Bill, Sookie and anyone else involved. Their new solution is to wrap him in silver and put him in concrete, but ghost Godric still disapproves of this. It’s said that it will only contain him for 100 years, which as Russell puts it, is a “nap” for him, and surely he’s just going to come kill them and anyone they care about the minute he’s out. Then Bill knocks Eric into a hole and fills that up with cement because he knows about Sookie. 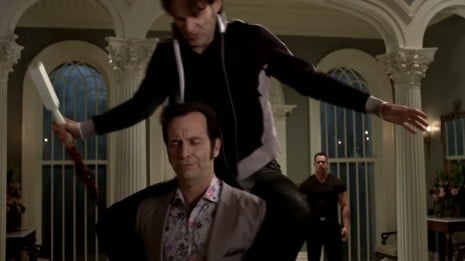 “Sure you’re thirty times my age, but it’s worth a shot!”

Unfortunately, for reasons that the show doesn’t even attempt explaining, Eric escapes immediately. Did Russell escape immediately too? If Bill wanted all those who knew about Sookie to meet “the true death” as he says, why didn’t he just jump down there and stake the both of them once and for all? And I never understood why after Russell ripped out a news anchor’s spine on the air, why the entire vampire nation wasn’t after him, and somehow it was still just up to Eric to take him down all by himself. It was a bit late for Nan Flanagan to keep things quiet, no?

I think between vampires and shapeshifters and maenads and werewolves and werepanthers and voodoo and witches and faeries, True Blood has just exhausted itself and has lost any semblance of being a remotely plausible reality where humans and vampires now coexist because of True Blood. The Bill and Sookie rollercoaster is just annoying at this point, and all the subcharacters we all know and love are completely disjointed from each other, and relegated to insipid storylines.

I like True Blood, or else I wouldn’t have watched it for three seasons. But it’s got some serious storytelling issues that need to be rectified if the show is to go on.

We’ve seen zombie, ninja and Star Wars themed engagement shoots before, so it stands to reason that a Game of Thrones one was going to come sooner or later. Above and below are Ramon and…

Alright , I’m definitely a moron, because I stared at this for a sold five minutes before seeing the two Batmen. I even wondered why the hell there was an arrow in the middle of…

(click to enlarge) Just a funny bit of art today from Bryan Lee who imagines what it would be like if Squirtle tried to infiltrate the cool kids club at school. You’re going to need…

(click to enlarge) Alright so if this is cosplay, it’s about as low-level effort as you can put into a “costume,” but it’s still awesome. It’s a Krang apron via where else, Etsy, that you can buy…

I know we don’t commentate on the “real world” very often here, hence the name of the site, but have you seen what the hell has been going on in Egypt? Yesterday, I watched three…

Words and phrases come out of nowhere.  They catch on like wildfire, and die out just as quickly.  Some linger, like viruses.  (I absolutely loved Joy’s Introduction To Nerd Poker, and I’ve already made it…