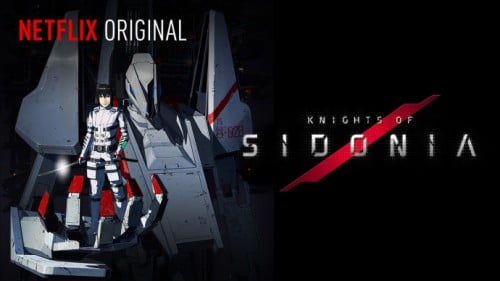 Netflix original programming is quickly becoming a premiere go-to source for quality television. HBO may have a hefty head start as the reigning champion, but it may not be very long before the diversity of programming the DVD rental/streaming service starts to eclipse even their titanic credentials.

In a couple years, we’ve already received the charged political drama of House of Cards, the irresistible Orange is the New Black, the horror-themed Hemlock Grove, the return of fan-favorite comedy Arrested Development and Star Wars: The Clone Wars, and a lot more including an ambitious upcoming collaboration with Marvel Comics to bring several of their characters to the small screen.

Surely this bounty of awesome entertainment is missing something, though. Perhaps high-concept science fiction or (dare I suggest) anime? Don’t worry, friends. Netflix has geeks covered on both counts. Knights of Sidonia became available for our viewing pleasure last weekend as their latest serving of original programming and it did not disappoint.

Science fiction means a lot of things to a lot of people. To some, anything that takes place in space or has aliens or robots in it is sci-fi. To some, the genre is defined by high-concept social commentary, and to others it’s all about the science and future possibilities of technological advances. My favorites are the ones that can combine all of these different aspects into a single cohesive story with great characters and amazing visuals.  This is one of those. 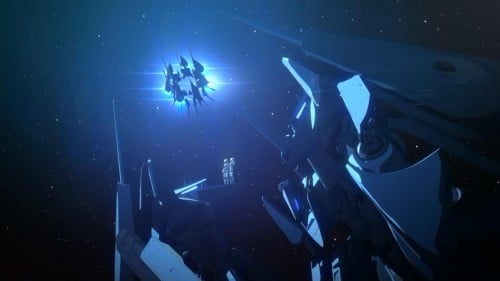 One of the things that has consistently impressed me with Netflix’s choices in programming is that they seem to gravitate to shows that take the high road and don’t talk down to their audience. They deal in philosophical themes and the nature of human psychology and often don’t bother explaining everything, instead trusting the audience to be smart enough to figure it out for themselves.

Knights of Sidonia is not George Lucas or J.J. Abrams’ brand of sci-fi, nor Christopher Nolan’s. Its attention to detail actually resembles the classic literary works of the genre more than anything else, with a Japanese mecha twist and elements borrowed from some of the classics of television and cinema to make something different in tone from any of them.

The plot is somewhat of a mix between Attack on Titan and Battlestar Galactica. Earth was physically destroyed by transmorphological (apparently, I just made that word up) cosmic organisms known as Gauna –which resemble John Carpenter’s The Thing in capabilities and come in a variety of sizes- and mankind’s survivors are on the run in a spaceship, Sidonia, that was built into a chunk of what was left of the planet. As far as we know, the residents of Sidonia represent the last vestige of humanity in the universe, and the Gauna are still coming for them. 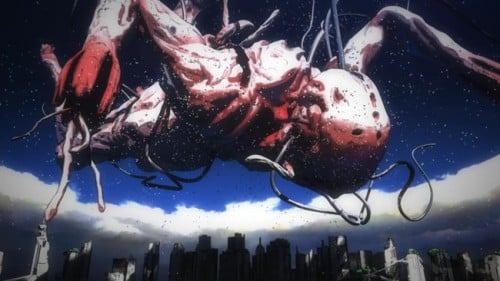 Enter our hero, Nagate Tanakaze.  He’s a thief living in Sidonia’s “underground” region, where his grandfather raised him and secretly trained him to fly defensive mecha units, Gardes, using simulations. You already see where this is going. He gets caught stealing food, but ends up as the top gun once they see his unparalleled potential as a combat pilot. Nothing new there.

What is new and interesting is the science that’s injected seamlessly into the narrative. Sidonia has helped solve the problem of food rationing with genetic engineering. People can now gain their primary nutrition from light through photosynthesis and only have to eat a single meal a week to remain healthy, for example. And the ship itself represents a rare utilitarian build. It’s not going to win any aesthetic awards against Galactica or the Yamato, but it was built for the exact function it’s used for, as a shelter for humanity.

When Sidonia changes course, the populace have to use hooks affixed to their belts to connect themselves to railings provided for the occasion or risk being hurled to their death from the sudden change in movement. And when Garde units fly together, they connect in a ring formation and accelerate together until they break off to engage the enemy as a unit, economically conserving fuel in transit. Most sci-fi series don’t want to be bothered with the problems that simple physics presents for the kind of space travel they like to portray so it’s really refreshing to see a show tackle these kinds of things. 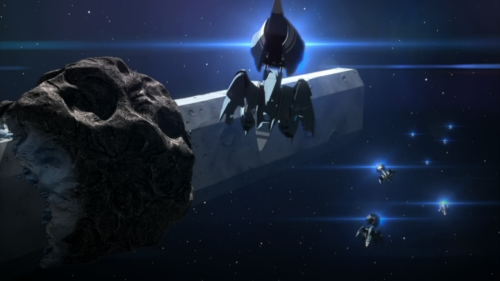 These and a lot of other aspects of the series are not explained to the viewer in any detail. It’s left up to you to keep up, and a great many things are left a mystery by the end of this first season. This is the exact definition of “hard” science fiction. It expects you to keep up and be patient. But don’t worry, when things get rockin’, they really get rockin’.

The animation is absolutely top notch. Say whatever else you want to say, but this is a damn good-looking show. The Gauna are suitably intimidating and horrific, the Gardes look cool, the combat sequences are fast and furious, and the vastness and serenity of outer space is fully represented too. The season finale is possible the most epic thing I’ve ever seen on the small screen. I literally felt like I should be watching it in a theater. The sound, fury, and frantic visuals were almost overwhelming, even on the small screen.

And the characters; an interesting bunch to say the least. While the tone of show veers away from comedy, there is a lot of drama and tension between the military, government, and social aspects to keep it interesting. There’s are side stories including bear lady cook (what’s that all about?), immortals, ant-war secessionist protesters, a self-aware humanoid generated from a Gauna, a group of female clones, a jealous entitled overachiever, even a bisexual love quadrangle to name a few intriguing character points. And the show is never afraid to show the human cost of the conflict, even in victory. 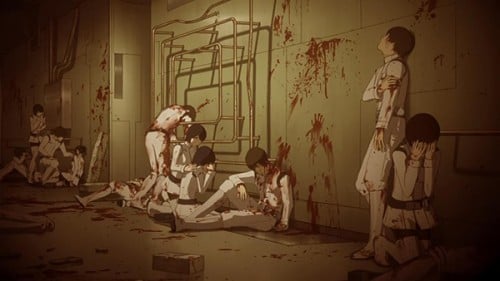 This is just from the evasive maneuvering.

If I had to sum Tanakaze’s story up in one sentence to put Knights of Sidonia’s tone in perspective, I’d say most of season one feels like a very small story set in a massive universe begging to be explored further. The mid-show pauses show us tantalizing bits of concept art titled “100 sites of Sidonia” that put into context how much we aren’t seeing just following the major characters around. There are so many questions raised and so much backstory left to be filled  in the twelve episodes we’ve got to chew on so far that all I want is more, more, more.

To sum up a few more points worth pointing at, the opening song instantly became one of my favorites (and no, it’s not the awesome Muse song), a classic “stranded” episode brought back good memories of Macross (but with more urine filtering), and Netflix even went through the trouble of dubbing the show in English for us. This last part is particularly helpful because they haven’t yet mastered the art of prioritized subtitling. When a character is talking, the subs will often skip the dialogue in favor of translating background text instead, which is a major pain that sometimes comes with watching anime on Netflix. I prefer the Japanese voice actors, but it might be worth saving yourself the headache and giving the English audio track a go.

Knights of Sidonia might be a little slow in revealing itself to the viewer, but in my opinion patient viewers will be rewarded with a level of science fiction storytelling we very seldom see in visual mediums these days. I won’t say this is the new Evangelion or Ghost in the Shell, but I will say it’s a worthy successor to that legacy of conceptual sci-fi anime and that I’ll be counting the days until I can stream season 2.

Here, have a quickie action scene.