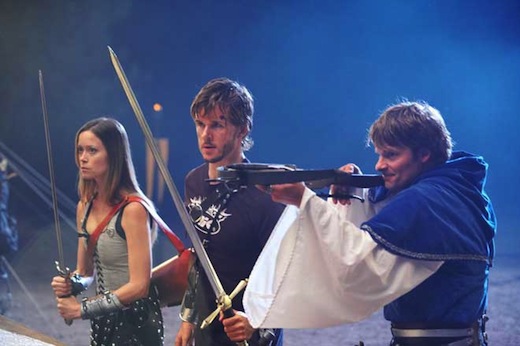 One fateful day at San Diego Comic-Con 2011, a new trailer was born.

The future looked bright for the little trailer, and the big strong movie it was sure to become.

Well, perhaps not big and strong and good at sports. But smart and creative, handsome in its own special way, and sure to be the one in charge of things once it made it through high school.

For a time, it seemed nothing could stop Knights of Badassdom from reaching its full potential: Eric was about to level up to grand sorcerer, Hung was packing an ounce of killer shrooms, and there be monsters in need of pummeling! Huzzah!

Nerds far and wide came together for a great gathering of geekery and LARP. There was Abed and Tyrion, River Tam and Jason Stackhouse, Liam McPoyle and Paul Kinsey, and…Steve Zahn (Reality Bites, huzzah!). And could the rumors be true, of a chariot bound Walter White?

We’d know soon enough, as it was revealed that the director had finished his cut before the trailer was even shown at SDCC. Surely, it would be quickly distributed for all to enjoy.

But then a darkness swept across the land, and evil took hold of the hearts of men. 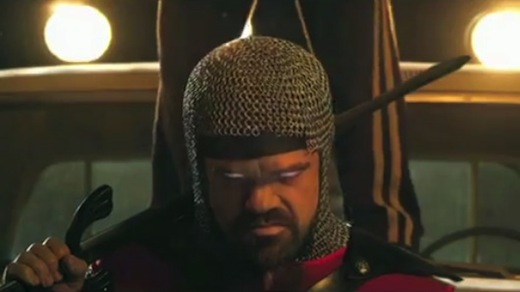 Our brave, heavy metal-laced hero of a film was spirited away from the protection of its fathers, tortured, and belittled. Literally belittled, as it was cut down to a running time of seventy minutes.

Horrific tales came from the West Coast, of story being sacrificed, concept being butchered, contracts being rent to pieces.

An explanation appeared in the wilderness like a mysterious mark on a door, but has since gone silent. Official channels spread only lies. Courageous nomads tweeted out for the film’s salvation, but to what end?

Swirling about the air, a dead-winter chill. A whispered word of warning:

Yet within this pit of despair were signs of movement. A date was made manifest. There was to be a screening on March the 5th in a city of angels, for those who were willing to invest in whatever gnarled mutation the movie had become.

As I was watching The Professional the other day I realized that we hadn’t yet done an article on assassins we found awesome in movies.   That was somewhat surprising to me. I think we may…

by Jenni Wright I’m not a midnight movie person.  My ability to stay alert and focused diminishes quickly after 10pm, especially if I’m sitting down.  The last time I saw a midnight movie, I was…

It’s been a long road for Nicolas Cage.  From a tiny role in Fast Times at Ridgemont High to playing action star, Cage has had a very successful cinematic career.   While he may never…

Hugh Laurie on Friends As you guys probably know by now, I pride myself on being able to find obscure scenes in movies and things that make you say “man, I totally forgot about that,”…

How the hell has no one ever thought to make this pun until now?