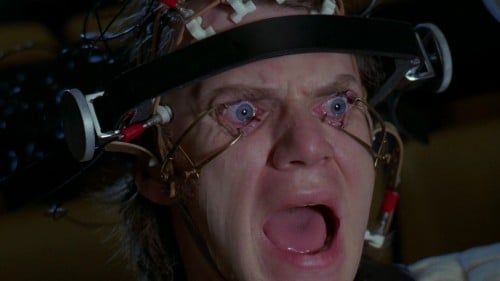 A cliche image, but a fun one.

Anybody out there suffering from trailer fatigue?

I see articles about this every now and then. Some take the angle of criticizing the tendency of modern trailers to spoil too much of the plot or too many of the big action moments. This is true. Others take the time to point out the way every trailer is basically trying to imitate the same thing — these days, it’s the “Inception noise.” Also true.

My issue, though, is that these things are just wearing me the hell out.

I’m not sure exactly when it happened, but at some point in the past few years most movie trailers went from being about two minutes long to about two and a half. To hazard a guess, most of the movies I’ve seen this summer were preceded by about five or six trailers.

In other words, there’s fifteen, maybe twenty minutes of this crap every time I want to see something in the theatre. Plus all the ads for the brand of projector the theatre is using, and the Coke in the lobby, and any number of other things.

Even the trailers themselves are overstuffed. On a lot of ‘em — particularly the ones promoting action/genre stuff — it feels like every available image from the movie has been squeezed in. My educated assumption would be that this is brought on by a corporate-driven paranoia that anything other than utter transparency regarding the content of a movie will somehow turn people off to it.

Odd then, that so many advertisers seem to think they’re copying Inception’s marketing scheme. That movie gave away almost nothing that I remember. It barely gave away the central premise of the story, much less the plot or any major action beats.

Certain things I’ve been reading indicate trailers are massively focus-tested, which would explain why they pretty much give every conceivable thing about a movie away except for the order that certain shots will appear in. Because when you ask a focus group what they want out of an advertisement whose very nature is to incite interest, they’re probably going to say they want more of plot or action or some other useless thing.

Which, in theory, would be why they’d go see the movie. But what do I know?

Every last thing about Oblivion, after watching this.

This whole trailer… thing… seems to be worse this year. At the least, this year is the first time I had to literally just look away from the screen for the vast majority of the trailers I see in theatres. It’s entirely possible that it’s been getting to this point for a while and I’ve simply not become sensitive to it until recently. (Thoughts?)

For those interested, the actual moment that I realized how much this was bothering me was in the run of ads before Elysium. Among the usual trailers was an extended clip of Metallica’s new IMAX… um… movie? Concert? 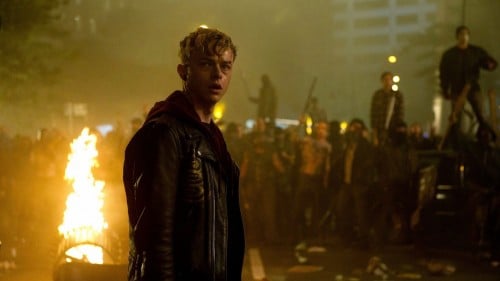 Image from Metallica’s new “Thing I Plan to Skip.”

Anyway, the first thing that went through my mind was a feeling of anguish at what felt like a sneak Metallica attack.* But as the clip wore on, I was surprised to discover that I was enjoying the experience of watching the Metallica song far more than I enjoyed sitting through any of the other previews that day.

For me, this was a Weird Feeling. But not an unexplainable one.

The explanation, actually, is pretty freakin’ simple. The Metallica clip had nothing but footage that was intended to be there. In other words, most movie trailers take images and sound that are intended for one purpose (to make sense in a narrative feature film) and use them to create an entirely different sort of experience (one that feels like that poor soldier in Full Metal Jacket who was held down while his roommates beat him with bars of soap).

The shots used to create trailers often simply don’t go together, which is why it’s hard to sit through a two-and-a-half-minute long sequence of them on a thirty-foot screen, backed by the sorts of bass-heavy thumping that we apparently demand in our trailers these days.

Trailers used to have narrators, plot summary, or even complete scenes to give weight and context to the images audiences saw in the ads. Take all that away and you’re left with the current options to either give a miniature version of the movie or simply throw all the cool sh*t in it at the audience and hope they go for it.

Okay, I’m done. Yes, I realize I sound like a grumpy old fart. But I want to hear you guys weigh in on this. Is my age getting to me, or is the way our modern trailer lineups are cut simply exhausting? Let me know below.

*Actually, the FIRST thing I thought was that we were getting a surprise preview of Amazing Spider-man 2. Alas.