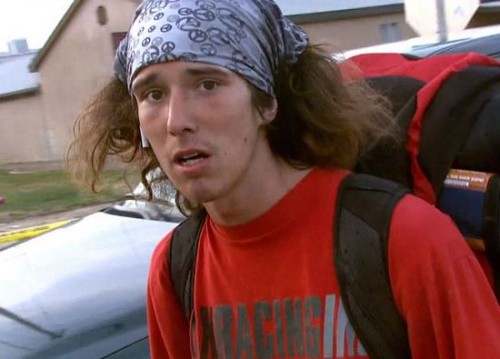 Update: I’ve been hearing about this story for two weeks now, and never once did I figure out that the guy Kai attacked didn’t actually die. I just heard “hatchet to the head,” and drew my own conclusions. I suppose that negates nearly all of what I say here in this post, but feel free to read anyway.

By now many of you have heard about the story of Kai, the hitchhiker made famous on YouTube after an act of heroism. You can watch the famed video here, or I’ll just briefly explain the scenario.

Kai is a homeless (or home-free, as he says) hitchhiker who talks like every stoned surfer you’ve ever imagined times twenty. His laid back life had him catch a ride from a stranger one day who happened to be rather crazy. The man said he was Jesus, and to demonstrate that, rammed his car into the first pedestrian he could find.

Afterward, he jumped out of the car and proceeded to attack two women. Kai thought this was very un-chill of him, so he proceed to run up behind the guy and BEAT HIM TO DEATH WITH A HATCHET.

The local news showed up to interview him, and the rest is history. This was like if Antoine Dodson had shot the guy in the face who trying to rape his sister. A refresher if you don’t get that reference.

Much like everyone, I laughed at Kai’s odd personality and applauded him for stepping in to do what he could. It wasn’t until I saw that Jimmy Kimmel tracked him down and brought him onto  his show for a bizarre interview that I started thinking about the deeper implications of Kai.

They talked about his life philosophy, the incident itself, and how Kai gave away money Kimmel gave him for being at the show. In the end, they wrap up the segment by giving Kai a wetsuit and surfboard, something he wished for during his initial interview.

I’m not  here to talk about Kai as a person. From what I can tell, he’s a fun-loving dude who may or may not be completely insane after years of heavy drug abuse.

Rather, it’s just that this seems like one of the first times that we’re making a national hero out of someone who killed someone else, vigilante style. We applaud those kinds of people who have thrown themselves in front of bullets during horrific mass shootings, but this is something else. This is a guy who is now famous for hacking someone to death with a hatchet. He’s on Jimmy Kimmel.

I’m not saying what Kai did is wrong. It’s the most obvious kind of right. It just got me thinking about how we’ve celebrated fictional vigilantism for so long, that it’s odd when it finally happens in real life. The most obvious example that comes to mind would be a Dexter, a show about a heroic serial killer, which by all accounts, should be an oxymoron.

But it isn’t. Dexter is a killer of killers, which is why the audience has no trouble rooting for him. But his actions are illegal on the show, and he’s constantly in fear of someone finding out his dirty secret. 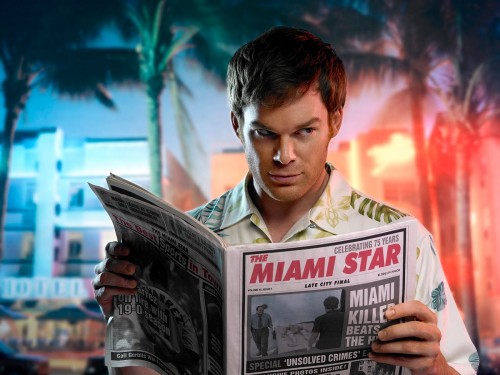 The way we’re treating Kai, however, indicates we might actually embrace a Dexter-type figure in society at large. Dexter operates in a legal black hole, what he’s doing is obviously illegal, but not a moral one to many who believe in the “eye for an eye” school of justice.

Interestingly, if Dexter went the Kai path, and happened to show up whenever his killers were about to murder someone, he could beat them all to death with a hatchet, and it would be him we’d be interviewing on the local news.

I suppose there are other examples of this is pop culture. Before Dexter there were the Boondock Saints whose famous mantra was “Do not kill, do not rape, do not steal.” Any of the above and you might find the silenced barrel of a pistol pointed at your forehead. Unlike Dexter, they simply went into criminal dens, guns blazing, which is a bit of a riskier move. The movie ends with  the news interviewing citizens on whether or not they think that the Saints are good or evil. 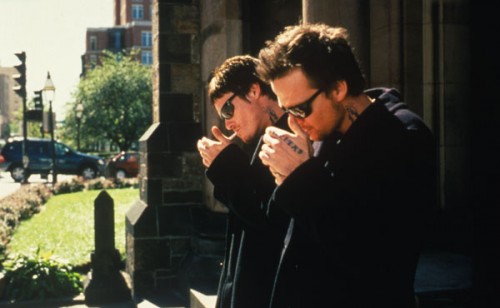 It’s just strange when a concept immortalized in TV and films for so long finally happens in real life. I had flashes of Dexter on Kimmel, talking about his code and knife collection. But the reality? Kimmel and Kai laughing it up, all because of a stoner split a crazy man’s skull open with a hatchet.

“How come nobody’s ever tried to be a superhero?” Kick-Ass asks. With the way Kai is being celebrated, maybe more will start.