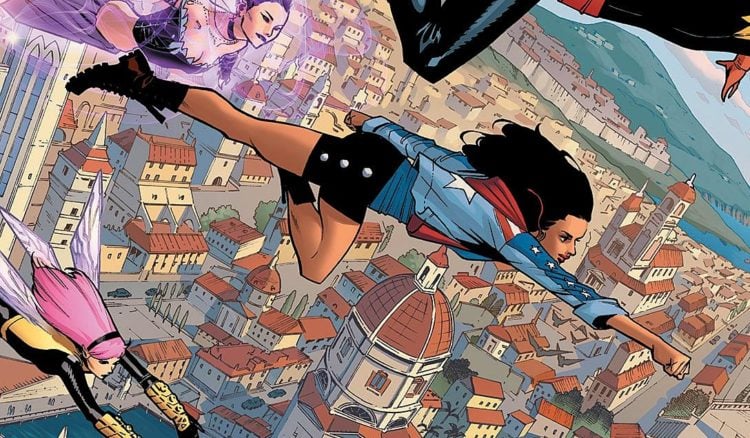 America Chavez is the second character to bear the name Miss America in Marvel Comics. In short, she is the daughter of Amalia and Elena Chavez, who raised her in a place called the Utopian Parallel where she picked up her superpowers by absorbing the ambient magic of a being called the Demiurge. When the Utopian Parallel was threatened with destruction, the Amerimoms sacrificed themselves to save it, which had a huge impact on America. Eventually, America ran from her home because she wanted to prove herself to be a hero while knowing that the Utopian Parallel didn’t need one, which is how she winded up in the main universe of the Marvel Comics setting where she started acting as a superhero under the name Miss America.

How Has America Chavez Evolved Over Time?

Naturally, America Chavez has seen a fair amount of change over the course of her existence both in and out of the setting. For instance, while she was created in 2011, it took some time for her to build up. This can be seen in how the character joined up with a number of superhero teams such as the Teen Brigade, the Young Avengers, the A-Force, and then the Ultimates before she managed to get her own comic book series, which started up in March of 2017 and then came to a close in April of 2018 because of less than spectacular sales. However, it is clear that Marvel Comics hasn’t given up on the character, seeing as how she is now a member of the West Coast Avengers.

Of course, her in-setting experiences are much more complicated than what can be revealed by this out of setting summary. In some cases, she has been involved in more focused adventures either on her own or with her teammates, whereas in other cases, she has been involved in setting-wide occurrences, with an excellent example being Civil War II in which she was one of the superheroes who sided against predictive justice. Besides this, it is interesting to note that America Chavez has already become caught up in the alternate timelines that are one of the more entertaining concepts in American superhero comics, seeing as how one story has already described one future timeline in which she took up the mantle of Captain America as an adult. 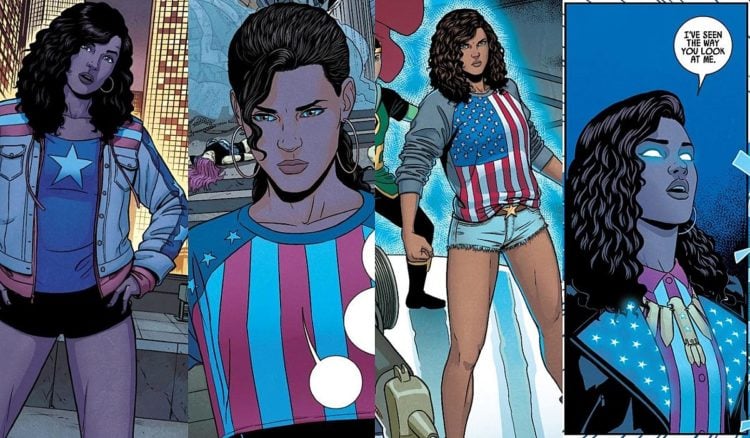 With that said, America’s experiences have been reflected by the costume changes that she has gone through over the course of her existence. Initially, her costume was inspired by her predecessor under the Miss. America name, which is why it features repeating motifs such as the stars as well as the red, white, and blue color scheme. However, it isn’t until her appearance in the Young Avengers that she gets a look that has since become pretty iconic for the character. Essentially, her more recent costumes retain the same motifs, but what stands out about America is that her costumes aren’t superhero costumes so much as in-theme clothing. In a way, this serves to stress the character’s physical invulnerability, which enables her to shrug off hits that would incapacitate others or worse. However, it is also an interesting statement on the fact that America Chavez and Miss. America aren’t separate figures. Instead, America Chavez is Miss. America is America Chavez because unlike some of her older counterparts, she doesn’t have a double-life that need to be kept separate from one another. In other words, America is always on the job, which is why her costumes look like the kind of things that people might wear in real life while still referencing the motifs that she has taken for her own.

As stated, America’s solo comic book series has come to a close. However, the nature of comic books means that it isn’t impossible that she’ll get another series at some point in the future, particularly if someone comes along with a solid idea that resonates with the decision-makers. As such, it will be interesting to see how the character continues to change in the times to come, particularly since she remains very much active in the Marvel Comics setting even if she is no longer headlining her own comic books.

Sometimes I find art projects that I just have no words for. This is one of those times. It’s a gallery of mutated and grotesque heroes and pop culture icons, and I’m sure it’s making…

If there’s one thing Superheroes can teach us, it’s life lessons that we should know.  We hope you learned a little something today. Via Julia Lepetit

And that’s why Console owners are superior! We don’t have to worry about Steam sales with 75% off…and free trials to games that haven’t been released……I’ve made myself sad, now. Comic via Julia Lepetit

I love being pointed in the direction of new and talented artists, and I think I’ve found a good one today in the form of illustrator John Gallagher. He’s a entertainment artist out of Vancouver,…

Having just seen The Human Centipede, I’ve unfortunately spent a lot of time over the past day or so thinking about what it must be like to be physically attached to someone for the duration… 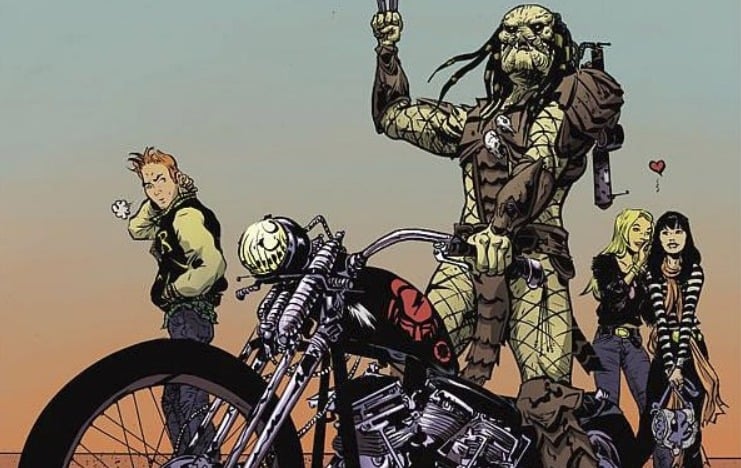 For context, Archie comics started up in 1939. Seeing as how those comic books are still selling in the present, it should come as no surprise to learn that they have see a fair amount…