In case it wasn’t obvious by now, I am a fierce fan of the Marvel Cinematic Universe: the shared-continuity, meta-franchise that includes, among others, the Iron Man, Thor, Captain America and Avengers films. Seeing as how I’ve already reviewed both Captain Americas and the first season of Agents of S.H.I.E.L.D. in the weeks surrounding their DVD releases, it should really come as no surprise that I would do the same thing with Guardians of the Galaxy – the summer’s breakout hit that everybody, and nobody, saw coming.

On what is already the worst day of his young life – when his frail, sickly mother dies after a protracted battle with cancer – young Peter Quill is abducted by alien mercenaries lead by the coldly sentimental Yondu.  But rather than being turned over to the man who hired them to abduct him in the first place (option #1) or eating him (option #2), they adopt him and train him in the life of ravaging: thieving for hire.

Twenty-six years later, Peter – who now goes by the moniker “Star Lord” – is entrusted with retrieving a mysterious orb from a dead planet for a high-end merchant, which he immediately tries to sell by himself.  Outraged, Yondu puts a price on Quill’s head, which bounty hunters Rocket (an anthropomorphic raccoon) and Groot (a sapient tree) aim to collect.  Meanwhile, the green-skinned Gamora (daughter of the meta-antagonist Thanos) seeks to steal the orb for herself, causing all four of them to be imprisoned with Drax the Destroyer (a gray-skinned brawler whose family was murdered by Ronan the Accuser, Gamora’s boss).

Their plan is simple: team up, sell the orb, split the cash and go their separate ways.  But when they discover what the orb really is – one of the fabled infinity stones forged in the crucible of the Big Bang – they realize that must safeguard it from Yondu, Ronan and Thanos, or risk the destruction of the entire Galaxy. 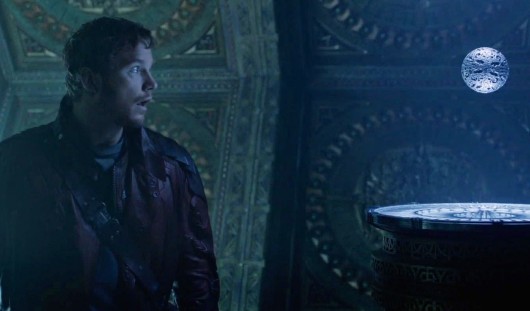 Guardians of the Galaxy‘s success is just as perplexing as it is estimable.  Before the film’s release, the comic that it’s based on was an obscurity among even hard-core Marvel fans.  Despite Marvel’s galactic stories being richly populated, the “Cosmic Avengers'” inherent disconnect from their terrestrial-based compatriots left them without the same built-in fan base that Iron Man and The Incredible Hulk brought with them to theaters.  Star Lord simply lacked the inherent brand recognition of Captain America.

But despite being unashamedly steeped in enigmatic obscurities, the glib characters, operatic setting and slick narrative are immediately familiar to audiences that grew up with Star Wars, Star Trek and Firefly.  Despite being a genetically modified raccoon and his “personal houseplant / muscle,” Rocket and Groot are immediately recognizable as this film’s Han and Chewie.  Star Lord plays out like an immature take on Malcolm Reynolds, while Gamora is like a rough amalgamation of Jayne and River Tam.  Even Drax embodies the  “one man armies” that defined action films in the 1980s.  Despite their impossibly tangled and storied pasts, each character fits into a very specific genre archetype, which the film’s own marketing was quick to highlight: “a thief, two thugs, an assassin and a maniac.”

The film likewise highlights Marvel’s uncanny knack for choosing the right talent for the tasks that they need to complete, even when contrary to precedent and even logic.  The film is helmed by James Gunn, whose biggest accomplishments to date were penning the two live-action Scooby-Doo movies and directing the moderately well-received Slither.  While he had briefly touched on science fiction films in his career, it was nothing even remotely analogous to the scope and depth of this obscure little franchise that could.  They chose the fat guy from Parks and Recreations to headline the film, Vin Diesel to voice a space age Ent who can only say “I” and “am” and “Groot” (and only in that exact order) and Bradley Cooper – one of the most recognizable actors working today – as the voice of a CG raccoon.  The casting choice that should have failed most spectacularly is Dave Bautista, given the fate of other wrestlers-cum-actors before him.

But, as always seems to be the case with Marvel, every decision that they made, no matter how questionable, turned out to be the correct one.  James Gunn has proven to be an incredibly talented writer-director who is able to perfectly blend action and comedy with subtle hints of drama.  The entire cast, down to genre favorites Zoe Saldana and Karen Gillan, perfectly embody the characters that they portray.  Even Vin Diesel, with only three (and, later, five) words at his disposal, is able to uniquely intone each one to convey his intended meaning.  This inexplicably functional film was able to turn “we are Groot” into the transcendent message of an otherwise tongue-and-cheek action /sci-fi film and made a simple-minded brawler petting a grieving raccoon into the most touching scene from any film this year.

That being said, Guardians of the Galaxy is not without its flaws.  Despite its sizable run-time (clocking in at just over two hours), the film felt occasionally rushed between action scenes.  In particular, the non-combat scenes in Knowhere felt like they could have used some additional time to breathe and develop.  We see Rocket and Drax’s drunken confrontation, and the dramatic rant that follows, but not the build-up to it.  Rocket makes such a big deal about being called a rodent (or, conversely, vermin) that I would have liked to see the one time that it causes him to snap in-camera, not as a cut-away from Quill putting the moves on Gamora.

The climactic showdown between Ronan and the Guardians was unnecessarily set-up by The Collector in his drawn-out exposition about the Infinity Stones.  While the scene was certainly necessary for both this film’s and Infinity Wars Part 1 and Part 2‘s plots, it over-explained the hands-holding climax that would have been fine on its own.  Similarly, the ending – where (spoiler alert) Star Lord turned out to only be half-human, whose alien physiology innately allowed him to resist the Stone’s destructive influence long enough to allow him to defeat Ronan – was a shade too Dues Ex Machina for my tastes.  I understand that it’s something that originates from the comics and will invariably come into play in Guardians of the Galaxy sequels, but it simply did not work for this particular film, at least in the way that it was presented as an after-the-fact explanation as things were wrapping up.

While neither my favorite film of the year nor even my favorite Marvel film of the year (both honors are currently held by Captain America: The Winter Soldier), Guardians of the Galaxy is certainly the most memorable film to come out in 2014.  It’s an exquisite action / sci-fi film that everybody can enjoy, even those who are adamantly set against comic book and superhero-based films.  Overall, I give the film a solid 9 out of 10.

We used to shoot at Osama Bin Laden at our gun ranges here in America, but now that he has literal bullet in his body, that’s sort of left us with no viable singular enemy…

Right now I’m attempting to read through a giant number of sci-fi books that were suggested to me in this post. So far, I’ve gotten through Foundation, Unwound and am currently almost done with I,…

Man, it’s been awhile since I’ve even thought about Battle Royale, a movie that I used to love so much it was even a Halloween costume at one point. It’s a classic to be sure,…

Well wouldn’t you know it!  The Hunger Games is coming out tomorrow.   The long anticipated book series turned movie series is having everyone ask the question of “is this the next big thing?” Hell we’ve…

If there’s one thing Avatar has taught us, is that’s maybe we should see a movie before declaring that it sucks.  If there are two things Avatar (and Vietnam?) has taught us, then the second…

When the Oscar nominations came out earlier this month, it quickly became apparant that everything was, as it turned out, not awesome: far from it, in fact.  Despite being the hands down favorite to win Best…