Remember how we discussed supporting your local geek-based events a few weeks back?  I mentioned a little organization called GAAM (Games Arts and Music) and their efforts to bring gaming culture to the masses via multi-media exhibitions and shows.  Fortunately, GAAM is no longer a secret, as last weekend I donned my finest green shirt, loaded up the family and ventured to our local gallery to support The Legend of GAAM, their Zelda-themed event.

“Our first event was in December, Super Mario themed,” said Ryan Thompson, co-founder of GAAM and local entrepreneur.  This unbelievably hard-working former classmate of mine was ridiculously busy, but still managed to greet everyone he could and express his genuine thrill at the turnout.  Attendance tripled this year, compared to its debut predecessor, topping out at over 600 with nearly 500 pre-purchased tickets.  The massive turnout was at a local art gallery only a little over 2,000 square feet – recently revived Museum and Gardens provided the perfect blank canvas for the showcase of art, music, cosplay and interactive exhibits.

Before you read on, I strongly suggest you take this little diddy along, to get the proper ambiance.  And because it can be dangerous to go alone. 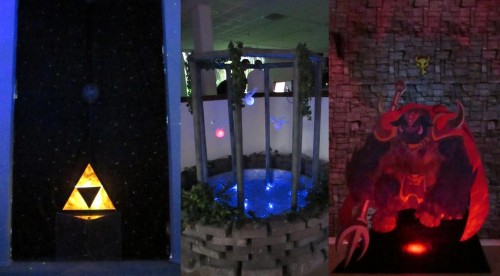 Speaking as someone who hasn’t ventured into Hyrule since the days of playing Oregon Trail in school was a thing, it was pleasantly nostalgic flowing through the “waterfall” series of rooms, decked out to resemble the various levels of Zelda.  The sky room, lit with hundreds of tiny fiber optics and the classic tri-force, served as the gateway to the music and dance area.  A curtain of green beaded fabric gave way to the forest, where real shrubbery and a large film background of a serene meadow seemed to pulse and flow in time with the music.  I even found a hidden rupee in the lush greenery.  Strands of lit leaves encircled chill lounge areas, while across the room, a blue curtain led to the even darker dungeon, where a 5-foot tall and expertly crafted Ganon awaited victims visitors.  Bats (the keese) and 8-bit torches covered the ceiling and grey-bricked walls. 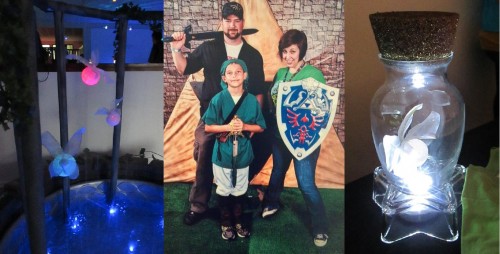 We took some… it was dangerous to go alone.

Hopeful-faced attendees approached the bar in an attempt to refill their red or baby blue Solo cups.  “We have four kegs on the way, guys,” security informed them, pointing to the fairy-lit “closed” sign atop the bar.  My buddy Robert turned and told me “We ran out of beer.  It’s not even eight o’clock, we still have another few hours to go.”  Ticket price included free food and beer, and Jax-based brewery Intuition Ale Works supplied kegs of summer favorites People’s Pale Ale and Jon Boat golden ale.  They were a perfect way to wash down hors d’oeuvres including spicy chicken, tater tots and pizza rolls.  You laugh, but they know who they cater to – the gamer crowd loved and devoured all of it.  The only downside was its rapid disappearance due to unexpected high turnout, and the stifling Florida in July temperatures that began to permeate the open foyer.  The gallery rooms were much cooler in comparison, an impressive feat considering the amount of bodies and electronics at full blast.

But enough about my over developed appreciation for décor (and desire for someone to develop a video game theme park) – let’s get on to the fun stuff. 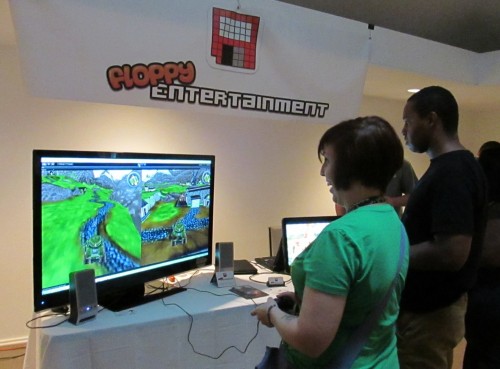 Aw, you sunk my battle-tank.

Wanna see me suck at a prototype game app?  Well, trust me, I did.  But fortunately there is no video of my fail.  This prototype tank driving game was fun to mess with, and included a hidden tri-force logo for an extra boost of theme song.  Alas, my fellow player exploded my tank after I spent a good minute trying to crawl out of the water.  I spoke with developer Brian Marshburn about Floppy Entertainment’s foray into phone and tablet apps as Jacksonville’s first and so far only independent game development company.  Invert Game Studios also featured a demo of their newest game, Battle Strat – to some epic music no less. 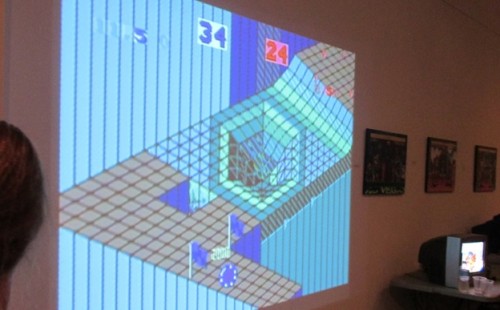 The tournament game room was packed out and booked solid, but we managed to find a small corner of the vendor room featuring TMNT IV:Turtles in Time.  Score.  Near the walkthrough gallery, my son decided to school me in the ways of Sonic All-Stars Racing Transformed – give me a good strategy game over a racing one any day.  Probably why I failed at the tank demo, too.  Love the culture – not so good with the logistics.  I’m like that really off-key singer in the choir; bless my heart, I’m giving it all I’ve got, but it ain’t always pretty. 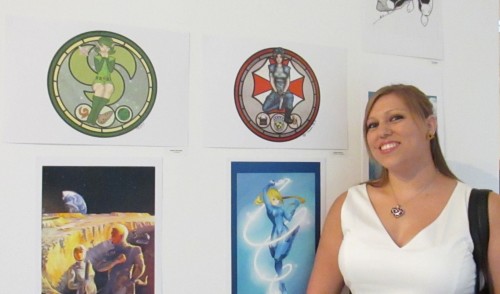 I caught up with artist Sabrina Escolada, taking a few pics of her magnificent pieces entered in both the charity auction and juried art exhibition.  “I’m planning on doing all the levels from Ocarina, in the same stained-glass style, like Kingdom Hearts.”  Many of the artists are local and employed full-time in various non-design ventures, but they love supporting the local scene.  Her pieces were snatched up quickly in the charity auction, benefiting Child’s Play, which provides games and entertainment for hospitalized children across the country.  I wonder if I could get a giant stained-glass decal for my car window…

DJ NES played the finest in chip-tune mixes perched atop the trees in the forest level.  It provided the perfect ambiance between magic shows, rap battles, karate demonstrations and live bands, including T3AM, Willie Evans, Jr., and On Guard.  I’m sorry we couldn’t stay for the after-party, or the after-after-party featuring Trevor Rockwell at the local Dive bar, which from what I’ve heard was also a huge success.  We had our own mini-Link to get home for his bedtime; it was bittersweet watching him enjoy our favorite games and reminiscing about the 80s.  Sigh. 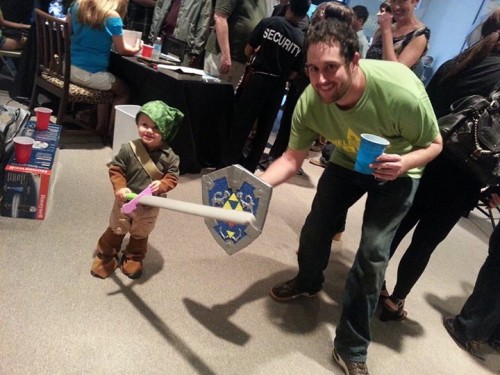 Remember baby Thor with his mini-Mjolnir?  Meet baby Link and his adorable mini-Hylian shield.  I admit I had to steal this picture, because he was off and running most of the time.  He would not stand still, see?

A friend and fellow film-crew companion dressed as Navi, complete with “Hey! Listen!!” sign board.  “I’m surprised she walked out alive,” my husband remarked, noting his personal frustration with the blue fairy’s “help”.  Other fantastic cosplays included a Ganon (of course), cartographer Tingle complete with balloons, more Links than you could shake a Deku Stick at, and a totally unplanned encounter between Louis and the Witch from Left 4 Dead. 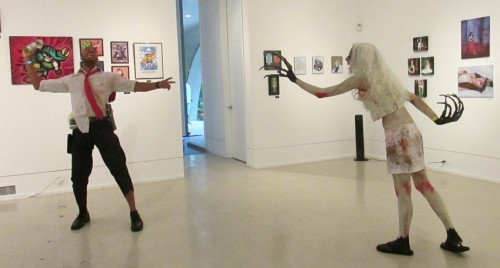 And now, because I know you’re more interested in where you can possibly secure these fine pieces of art than reading more of my incessant ramblings, here’s some of the amazing works featured with links.  We put a link on Link so you can link Link’s links.  Dawg. 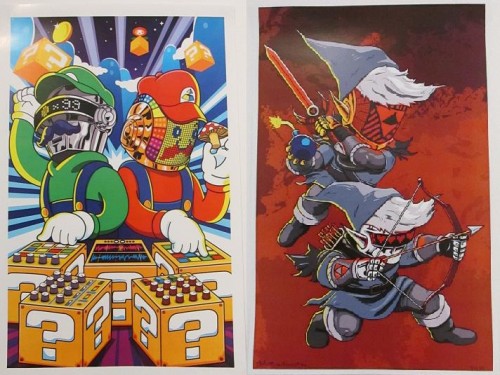 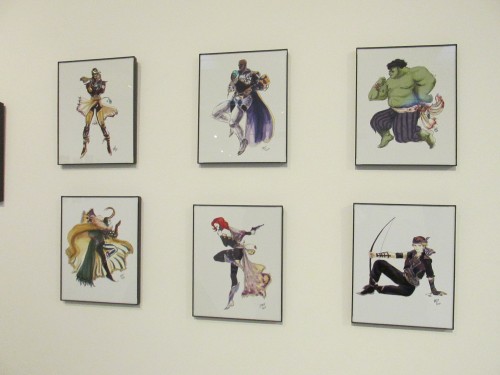 Avengers, FF style – by Pascalle Lepas. These were also among the first to go in the charity auction, and now I have to try and hunt down prints for my husband who eyed them all night.

Large (like 3 feet tall), limited edition scroll prints from Logan Zawacki.  Each was carried home rolled up and tied with a gold ribbon.

Despite minor hiccups that were rapidly resolved, the second Legend of GAAM was an overwhelming success for organizers, artists and guests.  I’m already looking forward to the next one!  There was way more than I could ever include here, so check out GAAM on their site or on Facebook for more fantastic art and (hopefully) upcoming events!

Andy Dwyer enters the world of dinosaurs in this pleasant mashup

Yesterday I wrote a post for a different site announcing that a game called League of Legends just revealed that they had 15 million registered users. Seeing as how that’s more than World of Warcraft,… 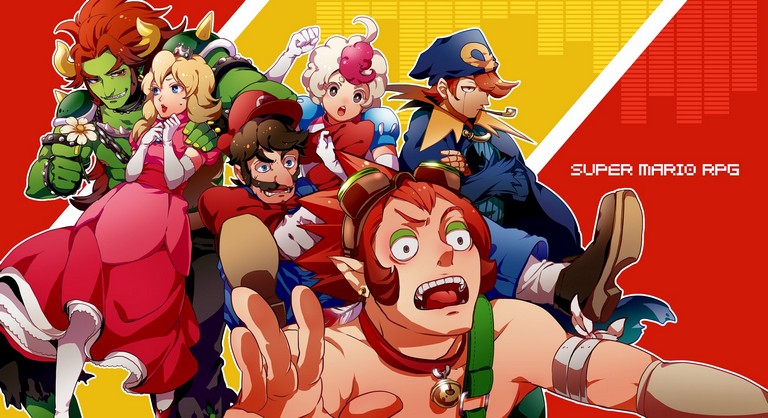 Might as well do my basic listing of quick opinions about these.1. Not bad. Hair is bit wonky but love the art.2. …meh3. I like these desings. I could see them like this is they…

When Sun Tzu wrote The Art of War over 2,500 years ago I don’t think that he had modern gaming in mind. Even though the ancient text was written with real-world combat in mind, there…