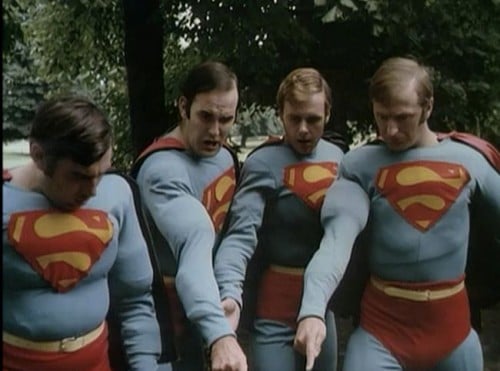 In a few short months, the five surviving members of Monty Python will perform live on stage. This performance will be their first full-cast reunion since a tribute special filmed in 1989. The tickets sold out in exactly 43 seconds.

There’s a reason for this. It’s impossible to deny the timeless appeal of the Pythons. Even those who claim “not to get it” are more than capable of quoting the movies or television show if their life depended on it. A lot of people (myself included) are more familiar with the exact script and timing of scenes from Monty Python and the Holy Grail than their immediate family members’ birthdates.

Despite a working knowledge of Python gags and references, however, not many people know about the inner workings of Britain’s most infamous comedy troupe. While giggling to yourself and watching grown men in drag put on fake Welsh accents, did you ever stop to consider that…

The Pythons had never worked together on the same show before 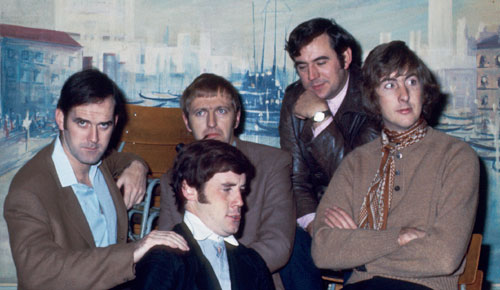 The Pythons initially had the professional interactive equivalent of passing ships. The name “Monty Python” hadn’t even been established yet before the development of the series (other possible names included Owl Stretching Time and The Toad Elevating Moment). Everyone except for Gilliam worked together on The Frost Report in 1966-67. They had not all become professionally acquainted, however, as their different writing tasks didn’t allow them to all work together in the same setting.

When Cleese and Chapman (who often wrote as a duo on shows like How to Irritate People, and Doctor in the House) were offered a two-person sketch series by the BBC, Cleese suggested bringing Palin along to round out the two’s comedy styles. With Palin came his frequent writing partner Jones and also Eric Idle. Idle suggested they also take on Gilliam so that his animation could provide a link between the random assortment of sketches, as well as a unique selling point for the series.

The point of this mini history lesson? Without John Cleese wanting to work with Michael Palin, the Pythons might never have even existed. Let that existential thought haunt your mind as you quote every last word from this sketch.

Graham Chapman was a raging alcoholic 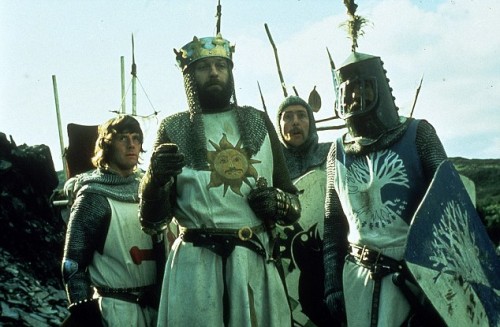 Chapman completed four years of medical school and was on his way to becoming a licensed physician before he chose to stick with comedy writing. One of his reasons for this was that a writer was allowed to have a more flexible schedule than the grueling hours of a medical doctor. This also gave him a lot more opportunities to get hammered, often before writing sessions or filming.

Chapman’s drinking had gotten so bad that by the time Holy Grail was produced, he was suffering from debilitating delirium tremens on the set because of the lack of alcohol. The scene where he crossed the “bridge of death” had to be completed by the First-Assistant Director as a double. You can tell Chapman’s distress in scenes like the one pictured above where he is sweating and visibly struggling to hold himself up. It didn’t help that Chapman was the only one wearing real chain mail during filming (more on that later).

Despite Chapman’s habit interfering with the group’s professional livelihood, everyone was still immensely supportive of his addiction as well as his controversial sexual preference. After Chapman revealed his homosexuality on a local TV show, an irate BBC viewer wrote in to complain that she had heard that one of the Pythons was an immoral gay. Eric Idle wrote her back, saying “Don’t worry ma’am. We’ve found out who it was and had him taken him out back and stoned to death.” The fact that Cleese left the show immediately afterwards may have drawn some scrutiny, and speaking of Cleese…

John Cleese had an abrasive personality

While being one hell of a writer, John Cleese lacked the restraint of the stereotypically proper British person. His eulogy at Chapman’s funeral proves that he wasn’t afraid of offending people, saying “Good riddance to him, the freeloading bastard, I hope he fries. And the reason I feel I should say this is he would never forgive me if I didn’t, if I threw away this glorious opportunity to shock you all on his behalf. Anything for him, but mindless good taste.”

Cleese’s tense working relationship with Chapman was the reason he left the show after the third season. Lacking a sober-minded partner to help flesh out his ideas, Cleese complained that he was only able to contribute two original sketches that year. He randomly told the group he wanted out while on a flight to Toronto, much to their shock and disappointment. Cleese stayed on to assist with the subsequent Python films, but didn’t participate in Flying Circus‘s fourth season, which got such poor ratings that it was canceled only six episodes in.

Cleese was ever the perfectionist when it came to writing. While Jones and Palin were more about having fun and making a quality show, Cleese saw Flying Circus as a transitioning project before he moved onto other things. Cleese even once worked with program sensors to pull a sketch before filming because he objected to the “unfunny” implication that the characters were tasting urine instead of wine. Eric Idle once said of Cleese that “he gets bored more easily than the rest of us. He’s a difficult man, not easy to be friendly with. He’s so funny because he never wanted to be liked. That gives him a certain fascinating, arrogant freedom.”

Cleese also had preferential treatment from the BBC program directors. Cast members like Palin complained that “the people at the BBC seemed to have this notion that we were just a bunch of friends of John who were helping him make a few shows. It was Cleese & Co to them, not Monty Python.” It’s information like this that casts a dark light on many of Cleese’s often-abusive characters. How much was acting and how much was living out personal sadistic fantasies is anyone’s guess. 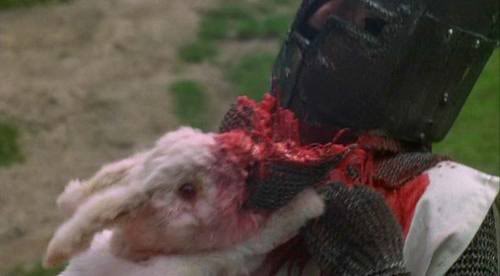 In addition to personal complications stemming from Cleese, Chapman, and Terry Jones and Terry Gilliam’s dissonant directing styles, the production of Monty Python and the Holy Grail was also plagued with faulty equipment, budget oversights, and miserable conditions. While Chapman had real mail on, as mentioned above, the other cast members wore loose wool overshirts spray painted silver. The dreary British Isle weather being what it is, many cast members were often cold and sick during filming.

Other cuts include removing entire scenes from the original script and replacing them with extended credits sequences and an “INTERMISSION” title to meet standard running time. The coconut gag was written in out of necessity because they couldn’t afford horses.

Also during filming, the location shoots at designated castles were abruptly cancelled following complaints by Scottish historical societies, citing the Python’s irreverent humor style as an innaporiate representation of medieval heritage. So the Pythons had to film peasants wallering in dung on privately-owned lots. In shots where a castle exterior had not been filmed yet, a plywood model was used – as pointed out by King Arthur’s page Patsy in the Camelot scene. Most castle scenes like the French taunting, Prince Herbert’s wedding, and the Knights of the Round Table dance take place in the single location of Doune Castle, with differing shots, scenery, and angles being used so that the audience couldn’t put together that they were looking at the same castle every time.

The film wouldn’t have gotten financed at all if it weren’t for Python fan like Pink Floyd, Led Zeppelin, and Elton John looking for reportable tax losses. They contributed over 90% of the film’s budget, including distribution. So the next time you’re jamming out to Black Dog, thank the Zep for bringing Monty Python and the Holy Grail into being while you’re at it.

You can tell who wrote a sketch/scene by its style 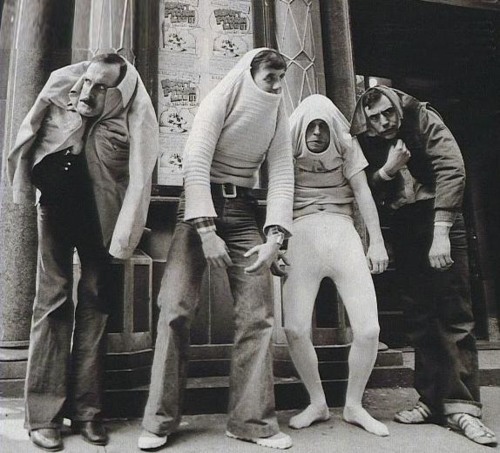 While “Pythonesque” would seem to denote a singular effect of the troupe’s comedy stylings, one can actually sort out several different approaches to eliciting a laugh when watching Holy Grail or Flying Circus.

One can chart the differences to cultural background, as well as taste. Graham Chapman and John Cleese were friends at Cambridge, and Terry Jones and Michael Palin were friends at Oxford. Eric Idle also went to Cambridge, and participated with Chapman and Cleese in the Cambridge Theatre club The Footlights. Gilliam, of course, was the only American in the group, setting his style outside everyone else’s.

The Cambridge alumnus tended to be more verbally-focused while the Oxford-grads were more visual. A rule of thumb is that any sketch focusing on escalating disagreements or verbal abuse was likely to have been penned by Cleese and Chapman. Both had a dark, sardonic sense of humor that found joy in dragging jokes down to the most uncomfortable possible level. Their work often focused on antagonistic relationships between two individuals trying to maintain their composure, but often failing. Sometimes, the focus was on just being rude.

Chapman was also known for escalating the irony, such as changing the object a customer was trying to return to an excuse-filled shopkeep from a used car to a dead parrot. He also contributed unexpected on liners such as the clincher to this sketch where Palin asks a police officer over suggestively, rumored to be inspired by a real-life occurrence when Chapman was able to bring two on-duty police officers home for a romp.

Palin and Jones, however, were more focused on being theatrical and silly. Examples include the Spam sketch and the Spanish Inquisition, notable for clashing stylistic elements from two different eras in each. Other visual gags were developed by the pair as links between other sketches with heavy location shooting, like the man with the flying contraption intro or the continuous undertaker bits in the eleventh episode of season one.

Finally, Eric Idle wrote alone and focused on word play or eccentric personalities. Sketches indicative of his approach to humor include the obligatory nudge nudge sketch as well as the incredibly meta “It’s A Living” fake program at the beginning of the self-titled episode. He also is more predisposed towards being musical than the others, causing him to write “The Money Song” and “Always Look on the Bright Side of Life” used in Life of Brian, which has become a British cultural institution of its own. It should come as no surprise in light of his incredible success with the Broadway show Spamalot.

Cleese summed it best himself when he said that “most of the sketches with heavy abuse were Graham’s and mine, anything that started with a slow pan across countryside and impressive music was Mike and Terry’s, and anything that got utterly involved with words and disappeared up any personal orifice was Eric’s.”

In closing, I leave you with proof of the Python’s irrevocable mark on our culture: a Muppet Show sketch that is a faithful recreation of an earlier Python one. Enjoy, and be safe if you’re getting blasted by snow/ice!