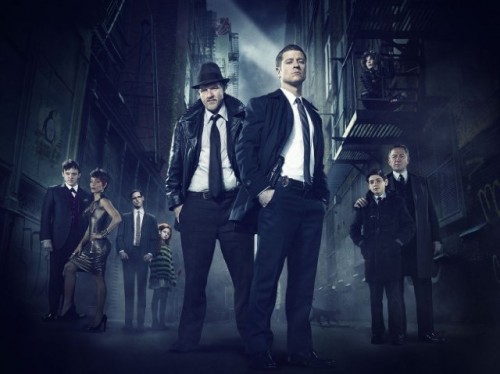 I definitely had my doubts about whether giving Batman the Smallville treatment was the best idea, but after a few episodes, I think it’s safe to say that the approach they came up with for Fox’s show about the formative years of Gotham’s most famous residents is shaping up pretty well. But there’s always room for improvement.

Although the show predictably opens with the fateful night at the theater that led to the eventual creation of the Batman, rather than focusing on young Bruce Wayne the star of Gotham is a rookie James Gordon, still many years away from being the Commissioner, making his way through the mire of corruption that is the Gotham City Police Department. Naturally, our heroes split time with some of Batman’s rogue’s gallery, who occupy various stations around the city prior to their eventual rise to supervillaindom.

Many of the usual suspects are already accounted for at this point, but we’ve seen them all time and again in countless incarnations. Gotham represents a whole new approach to the Batman mythos; one that’s more down to Earth and character-based than what most of we’ve seen in the past. In a weekly serial format, that opens up a lot of possibilities for characters that often get overlooked in film or animated adaptations in favor of more recognizable or zany alternatives. Here are five characters I’d like to see from Batman comics that could help make the show a real winner. 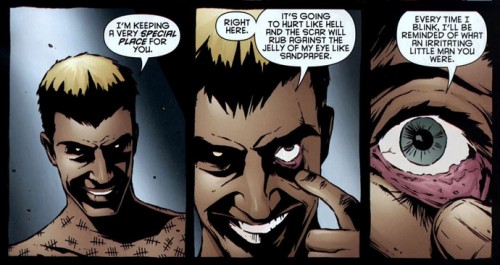 In any Batman show, the very first order of business has got to be establishing the villains. The Dark Knight’s legendary rogue’s gallery is the thing that elevates a story about a rich dude beating up criminals in a goofy outfit to one of the most enduring icons of popular culture. Gotham’s already got its Penguin to represent the ambitious businessman gone bad, Riddler for smug intellectualism, Poison Ivy for your environmentalist wackos, and possibly a soon-to-be Joker for the lulz. Nothing really new here. But with the show’s more realistic bend we’re going to need some more practical enemies for future-commissioner Gordon to cut his teeth on. How about a serial killer? How about THE serial killer? Victor Zsasz is a character that represents pure driven evil.

Zsasz is a fascinatingly twisted villain from the comics that has only been seen in cameos in other media thusfar. A quickie mission in the Arkham games here, a brief appearance in court in Batman Begins there, but nobody has really taken the time to really portray this guy as the f***ed up dude he is. He’d be an absolutely perfect villain for the GCPD to contend with.

Zsasz is one of those killers who genuinely believes he’s doing his victims a favor. In a suicidal depression after losing his wealth to the Penguin, Victor is preparing to jump off of Gotham Bridge when he is assaulted by a homeless thief. While killing the man in defense, the future murderer saw that existence is a meaningless struggle and decided that he would make it his life’s work to liberate as many “zombies” from their struggles as he could. For every victim he “saves”, he carves a mark in his own flesh. Nobody has really tackled this guy’s story outside of comics. It’s time for that to change. 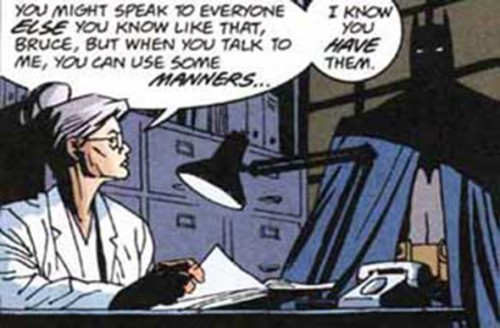 In the comics, Leslie Thompkins is Batman’s personal doctor and maternal figure. Why nearly every adaptation has eliminated her in favor of Alfred or even self-surgery I don’t know. She’s an awesome character. Doctor Thompkins dedicates her life to caring for the less fortunate, operating in Crime Alley and even offering shelter, treatment, and sanctuary to the nastiest villains in Gotham so long as they respect her one rule: no violence. And they almost always do.

What really makes Dr. Thompkins great is her relationship with Bruce Wayne. She is aware of his identity and considers his turn to vigilantism her greatest failing. In spite of their lifelong friendship, Leslie is very caustic towards Batman and strongly disapproves of his methods, going so far as to kick him out of her clinic when he shows up to haul off wounded criminals. And she’s one of the few people Bruce respects enough to obey.

The only time I remember seeing the character outside of comics was in Batman: The Animated Series, which is odd because she’d be such an easy character to adapt in live action. As a maternal figure to young Bruce and a foil to the violence of the GCPD, I can’t see any possible reason not to use her in Gotham. 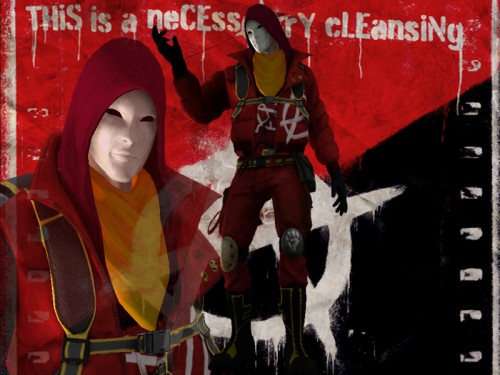 Anarky’s name pretty much speaks for itself. The guy’s so anti-authoritarian, he won’t even spell his own name right because that’s what the Man wants us to do. He’s a young, politically-motivated villain who seeks to restore equality by bringing down the government institutions that make oppression possible. It’s a sentiment I happen to share, but portraying a character actively seeking to put that motivation into action calls into question the methods one could use to accomplish this proposed equality, and that’s what makes him a great character. Better than that balloon guy, at least.

With no Batman to contend with yet, James Gordon would make a great foil for Anarky’s brand of social justice. While the corruption of the GCPD is clearly out of control, Gordon seeks to restore respectability by working within the system to change it for the better. Anarky believes that’s an impossibility and the institution must be destroyed for the corruption to be removed. It’s a perfect set-up.

I actually wasn’t aware of this late 80’s creation until recently when he began appearing in the obscure villain-fixated Beware the Batman and the video game Arkham Origins. In the former, Anarky appears in a white Moon Knight-ish garb to contrast with the Dark Knight’s imagery, with the Caped Crusader using force and fear to restore order, and Anarky using the same tools to create chaos, both supposedly for the greater good. His original look utilizing a V for Vendetta-esque broad brimmed hat is probably out of the question so I’m going to say Origins’ modernized approach portraying the character in a hoodie and a mask that brings to mind various anti-authoritarian activists movements would be the one to go with here.

As both a way to voice the philosophical concerns of a generation who has been sold out by their elders and a meditation on the morality (or lack thereof) of using terrorism to achieve your ends, there is a lot that could be done with a character like Anarky in a modern television series. Gotham should be that series. 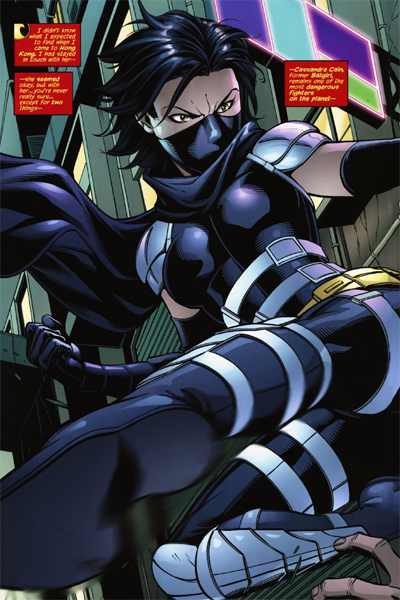 Yeah, I know I said they should use her in my proposed Birds of Prey spin-off of Arrow, but that show doesn’t exist. Gotham does. Cain made her debut in the awesome No Man’s Land storyline, where she worked as an operative of Oracle after Gotham City was destroyed in an Earthquake and walled off from the rest of the world, mostly evacuated except for the villains who took over the ruins and the remnants of heroes who stayed to oppose them. She went on to serve as the only Batgirl who could kick Batman’s ass before turning in the mantle and becoming a mere bit player in the DC Universe.

But even without Batman, Cassie Cain is a great character. She was born to supervillain parents and raised as an assassin, not even taught to speak. Instead she was taught to communicate entirely with body language, making her a perfect fighting machine who is able to read her target’s moves before they even put them into motion. Take this character as a young girl on the streets of Gotham and pair her up with Selina Kyle and you’d have a killer brains and brawn duo.

Alternately, Gordon could take her under his wing and attempt to teach a young killer whose only language is violence the difference between right and wrong. The idea of a young innocent (in her way) assassin rampaging through the Gotham underworld is a cool one too. Cass hasn’t been used nearly enough in the comics since her solo series ended and I don’t think she’s appeared at all outside of them besides a few video game cameos. It’s time. 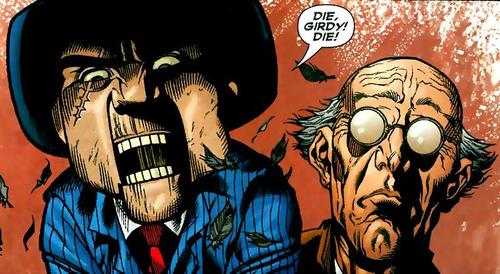 There’s this underrated horror film from the late 70’s called Magic about a timid man with a ventriloquist puppet that may or may not be alive that controls his actions (or is it all in his head?) which almost certainly inspired Alan Moore to create this character. The Ventriloquist believes he’s being ordered around by a psychotic puppet named Scarface, who utilizes a classic Al Capone gangster persona right down to the miniature working tommy gun clenched in his little hands.

This is a pairing I heard called for a lot when people were discussing villains they’d like to see in Christopher Nolan’s films. And with good reason. Batman villains usually represent darker aspects of Bruce Wayne himself. In this case, the Ventriloquist’s split personality mirrors Batman’s own dual personas. Does Bruce Wayne decide to be Batman or does Batman dictate who Bruce Wayne is? But again, even taking the Bat out of the equation, Scarface is just a great concept.

So you’ve got this helpless nerd working this insane inanimate criminal caricature who genuinely believes in his own mind that if he doesn’t do as the puppet tells him, he’ll kill him. It’s twisted and kind of brilliant, particularly when the wooden toy calls his owner “dummy”. With shows like Dexter and Hannibal finding success introducing increasingly bizarre and convoluted serial killings, I’d say that the Ventriloquist might actually fall closer to believability than a lot of what we’re used to seeing on TV these days.

Once again Batman: The Animated Series leads the way in portraying this character outside of comics. Scarface is often referenced or cameos in video games, but media seems to have an aversion to actually portraying him and I’m not really sure why. But Gotham has been impressive so far working with twisted material so hopefully we’ll finally get to see the Ventriloquist and maybe some other great obscure characters in the flesh. Here’s to hoping.

If you’re like me and have easily amused friends, your Facebook newsfeed is currently cluttered with images that are six pictures on top of a black background with a specific job title at the top….

(click to enlarge) Patrick Ballesteros has come up with probably the most adorable Breaking Bad-related thing you’ll ever see. He made all the characters children, and stuck them together in a fifth grade science class. If…

Yvonne Strahovski is hot. That’s great for her, for getting acting jobs, and great for Dexter, as she brightens up the screen whenever she appears. The problem is that she’s a little too hot. As in,…

Since reclaiming our Netflix queue from the clutches of less desirable cretins watching Tyler Perry movies (long story involving our stolen PS3), the husband and I have been trying to reprogram the algorithms into…

A while back we featured this masterpiece of art that was Batman fighting a shark with a lightsaber. Now, due to a large amount of snow in a city I don’t recognize, we have a…

It’s been a while since I visited this series, where I attempt to deduce which show currently on television will take Breaking Bad’s abdicated throne as the best show on TV. I’ve already covered Sons…