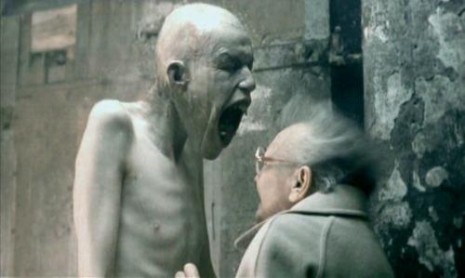 Horror can be enjoyable in smaller doses, which is why I’ve often felt that when done right, music videos are a wonderful place to explore the genre. Yet it seems so few artists choose to touch the medium, and one can understand why as horror is a very alienating genre. Those who like it, usually LOVE it, but those who don’t, usually LOATHE it. So an artist is taking a chance when he decides to make a horror video, knowing he may very well alienate half the viewing audience. The ballsiest among them say screw it and do it anyway. Here are six such examples.

Aphex Twin is one man, who goes by the generic sounding name of Richard David James. I could EASILY fill this list with his videos alone. I decided it best I start the list with one and end the list with one. But I am starting the list with the seminal disturbing video.

This video set the tone for all of the “children behaving badly” music videos you see now. Skrillex has taken this idea and run with it, almost ramming it into the ground in the process.

It would be foolish of me to start this list with anything but this video, though as it’s what started my fascination with creepy ass music videos. I came home very late one night, back in the days when MTV still played awesome stuff, but they relegated it to play a t4 AM. I sat in front of my TV with my mouth hanging open, and it truly got under my skin.

This video is creepier in the short time it is on then some 90 minute movies. Maybe it’s the kids, who all happen to have Richard’s face with a big, shit-eating-grin on it. Tiny kids with adult faces are very creepy as further evidenced by midgets. Maybe it is the scene in the middle, which I will not ruin here, but I will tell you that if you have an anxiety disorder, you may want turn down the volume a bit during that part.

Maybe it’s so terrifying because this little old woman looks so sweet that we have to wonder how she ended up in a hell overrun with anarchistic children who have ugly, adult faces and who may or may not report their misdeeds back to a giant, horrific demon that might live in my TV.

I also have to go on the record to say that ALL the videos you guys are going to tell me I didn’t pick when you comment after this article were ALL rip offs of this video. Y Control by the Yeah Yeah Yeahs being just one example. I love Karen O as much as you do, but a rip off is a rip off.

Highlight: The “scream” scene in the middle.

Alright, so this video is equal parts funny and disturbing, but I REALLY wanted to include it on the list because I know so few people saw it, and I just found the idea original. Plus, they do not shy away from the use of blood and guts, which is nice to see in this medium. I also think the cartoon-like pop sensibilities of the song make the video seem even more insane, which I’m sure the band was going for. Icelandic bands are the shit. 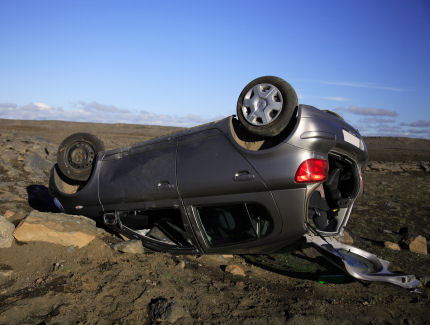 Just out of frame: The blood covered Slip n’ Slide.

I think the crowning moment was when the lead singer was standing on the upside down car dressed as a ringmaster, and they were throwing blood-filled water balloons at the victims, all to a song that sounds like it could be sung by Abba, and that point I fell over. I literally fell over. It was too awesome and too insane. My legs just buckled uncontrollably.

Car accidents have never looked so fun. Well, they looked more fun in that David Cronenberg movie Crash, but that’s a different article.

Highlight: When they’re playing one of the car crash victims legs like a guitar.

Boards Of Canada: Everything You Do Is A Balloon

Director: Video sampled from “One Got Fat” (1963) bicycle safety movie

Ok, so this one cheats a little, but that doesn’t mean it’s not creepy as hell. The band simply used the archival footage from the old bike safety film from the 60s called One Got Fat. I am one of the people unlucky to have seen this video before, and it ruined me.

There is just something about these monkey masks and the dead eyes that reside within them that still haunt me to this day. I watched this video with a friend who began weeping and had no idea why. They said they felt like they had been violated by the video. Ok, I may have just made that up. Sorry. It really is sort of like that, though. Plus, the song changes tone, from the sweet, welcoming intro, to when the drums kick in and the song takes a decidedly darker turn. It works freakishly well with the images in instilling an overall sense of discomfort.

It really is creepy, though. Obviously, this band knew it and constructed a haunting song around it. Either that, or they hired a director that was lazy as hell and slightly brilliant. Who knows? Who cares, though, because if the end result is a bunch of kids, driving around on bikes with terrifying monkey masks on, then everybody wins. Or we all lose. I still haven’t worked that one out, either. 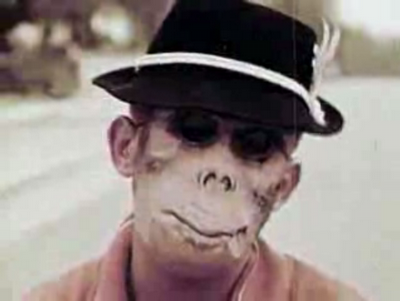 This is that moment Nietzsche was talking about. The abyss is staring back!

Highlight: When that first monkey kid pulls in front of that car and gets killed, and then you realize that ALL of them are going to get killed in increasingly brutal fashions. It was a precursor to Final Destination, I think.

Health: We Are Water

Come on, guys. You knew there had to be SOME nod to slasher films on here, and I think these cats do a pretty decent job of conveying the best parts of those movies. Plus, the song works incredibly well with the visuals. On top of that, there’s a huge nod to the cinematography. If only all slasher films looked this poetic in their chase scenes.

Plus, when he finally catches her and the scene goes where you think it is going to go, and then it takes a hard right, then comes back, and by that time, a guy has been stabbed in the dick with a stick. Yeah, I sure as shit didn’t see that coming. Either did he, apparently. That is why you wear pants when you kill people, duh. 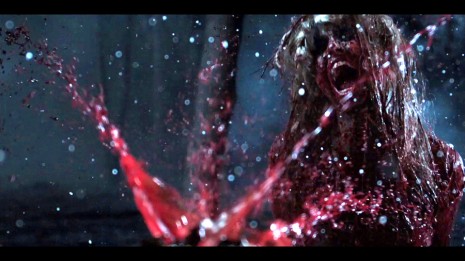 The new commercial for GUSHERS fruit snacks is really intense.

Highlight: The decapitation. The body looks freakishly realistic as it hits the forest floor. Also the wig. Roleplay ALWAYS ends that way for me, too.