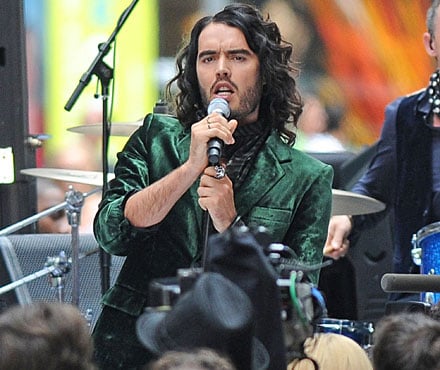 For better or for worse – depending on who you ask – the Judd Apatow/Rudd/Rogen/Segel crew hasn’t been as prominent recently;  it almost seems a little weird that other people are capable of producing comedies.  For a while, it seemed like there was a new Apatow comedy coming out every month, which is perhaps why, from my perspective, there wasn’t a lot of buzz about Get Him to the Greek.  Not only was this an Apatow comedy, but one of the film’s protagonists is an unforgettable character from an Apatow movie – Aldous Snow from Forgetting Sarah Marshall.  Aldous was one of – if not the – best thing about Forgetting Sarah Marshall, but would his rock star act wear thin over the course of an entire movie? 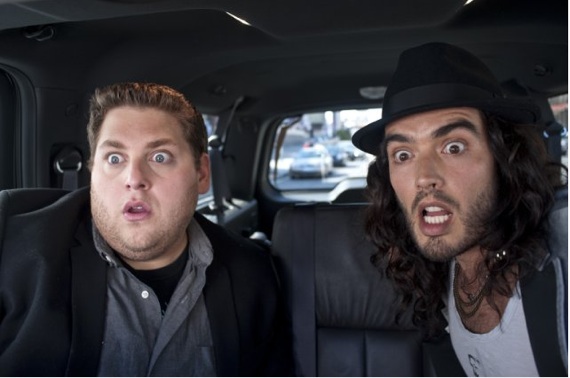 Not really, actually.  If anything, Aldous seems a bit restrained – but more on that in a bit.  Nicholas Stoller directed Get Him to the Greek and Forgetting Sarah Marshall, and he uses the beginning of both films to serve as a sort of prologue involving recognizable media outlets (Like “Extra” and TMZ).  In the beginning of Greek, we learn that following the events of Sarah Marshall, Aldous Snow releases the musical equivalent of Gigli, breaks up with his pop star girlfriend Jackie Q, loses custody of his son Naples, and, after seven years of sobriety, gets back to drinking and drugs.  Aldous’ downward spiral is near complete; he’s just about at rock bottom.  And that’s where Greek begins.

Jonah Hill plays Aaron Green, not Matthew the creepy waiter from Sarah Marshall, and no, there’s no reference to the fact that they’ve both crossed paths with Aldous Snow and look absolutely identical.  I thought the writers could work in at least one joke with regard to that fact, but then again, I don’t write comedies for a living, so what the hell do I know?  Anyway, Green – who lives with his medical student girlfriend – is an intern (or some other type of low-level employee) at Pinnacle Records, headed by Sergio Roma, who is supposed to be, I guess, Puff Daddy.  Oh, right, it’s P. Diddy now- let’s just call him Sean Combs.  Roma calls a meeting asking the interns for ideas, and the only good idea of the bunch comes from Aaron. 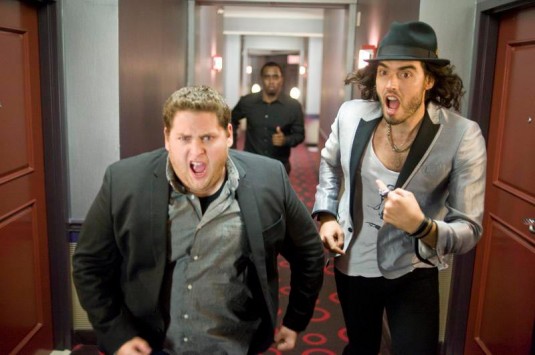 Aaron’s idea is to have Aldous play a concert at the Greek Theatre in Los Angeles to commemorate the tenth anniversary of an historic performance by Aldous back when he was in his prime.  With sponsors, DVD sales, and other marketing strategies, Pinnacle Records could make a ton of money from the concert, and so Sergio gives Aaron’s idea the green light.  Aaron has his moment to shine – 72 hours to fly to London, grab Aldous Snow, and get him to the Greek Theatre in time to play a concert.  Obviously, it’s all easier said than done and doesn’t go very smoothly.

Jonah Hill and Russell Brand have great chemistry together, but you probably already knew that if you’ve seen Sarah Marshall.  Personally, I think Hill is better as the crude jokester – like in Superbad and Knocked Up – and he’s pretty much relegated to being the straight man in Greek.  And as far as Brand’s/Aldous’ out-of-control rock star shtick, it’s not nearly as overplayed as I had anticipated.  In fact, for an R-rated movie, I’d say that the rock star stuff was pretty tame.  I mean, sure, there was a heroin bag up the poop shoot gag, but the parties and orgies were for the most part absent.

That’s not necessarily a bad thing, though, as like its predecessor Sarah Marshall, Greek has a soul.  There are some genuinely emotional scenes between Hill and Brand and even though the movie doesn’t go quite so far as to serve as an indictment against the record industry, it does suggest there are real problems with the way musical artists are treated.  Greek is still first and foremost a comedy, however; it’s just nice to see that it successfully created meaningful relationships between its characters without taking itself too seriously while doing so. 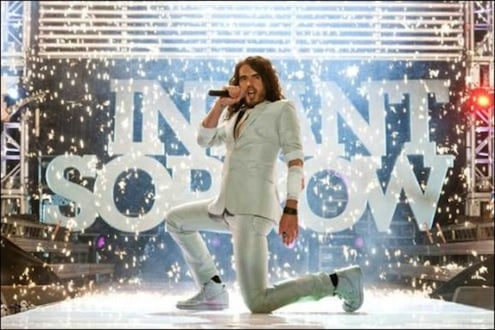 Finally, Hill and Brand aren’t the only ones with great chemistry.  Combs and Hill are great together, and I’d argue that the funniest scenes involve Combs.  There’s one scene in particular in which Sergio explains to Aaron the concept of a mind f*ck, and it’s easily the hardest I laughed during the entire movie.

All in all, Get Him to the Greek is a solid comedy with a little bit of soul.  It’s not nearly as funny as The 40 Year Old Virgin or Forgetting Sarah Marshall, but it’s not a generic waste of time, either.  It’s certainly well-made, the actors work well together, and – if you’re into this sort of thing – there’s no shortage of Infant Sorrow songs.  While it’s not nearly as raunchy as it could have – or maybe should have – been, it’s definitely funny and entertaining.