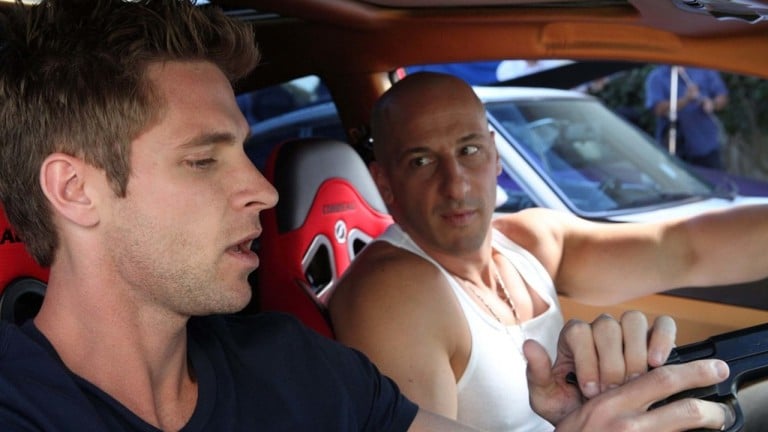 The Fast & Furious franchise has become a global phenomenon. When these movies kicked off all the way back in 2001 they were initially met with a mixed response, but Fast Five marked a turning point in the franchise as it transformed itself from a street-racing action series to pure adrenaline-fueled fun.

Everyone is talking about Furious 7 and odds are by now you have seen the movie as well as multiple reviews of it, lauding the grand-scale action and touching farewell to Paul Walker (Rest in Peace). So with Furious 7’s huge box office take and the Fast & Furious franchise’s ever-expanding popularity, it makes perfect sense that spoof-masters Jason Friedberg and Aaron Seltzer would take advantage with their new spoof, Superfast! 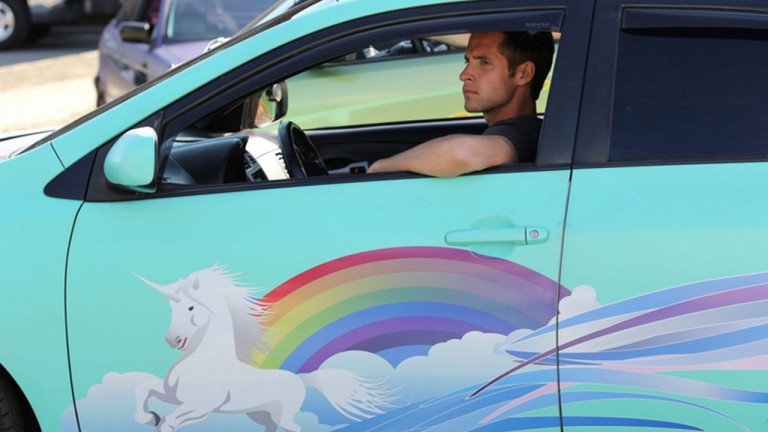 This pair were a part of the writing team for Scary Movie which was initially met with a lukewarm response but has since gained a much larger fanbase (this writer included), although the sequels have declined drastically in quality. But Friedberg and Seltzer were not around for the sequels and instead went on to create such classics as Date Movie, Epic Movie, Disaster Movie and Meet the Spartans… if the sarcasm is not clear here then I apologize.

Superfast! obtained a VOD release to coincide with Furious 7’s opening and this effort has received considerably less attention than a lot of the pair’s other work. But it must be said this movie – although definitely still not good – is a lot better than most of their other movies.

For one, Superfast! is much more focused than their other movies. Disaster Movie and Epic Movie were essentially just a string of references to popular movies of the time with little narrative to connect them. Aside from a brief GTA reference, Superfast! is entirely focused on spoofing the Fast & Furious franchises, particularly 2001’s The Fast and the Furious and 2011’s Fast Five.

The biggest problem here comes from the fact that taking shots at the original The Fast and the Furious makes this endeavour seem entirely too dated and it would have been a better idea if they focused on the more recent movies in the franchise. About haflway through is when the movies changes gears (pun not intended) and takes aim at Fast Five, and this is when the movie goes from terrible to… slightly less terrible. 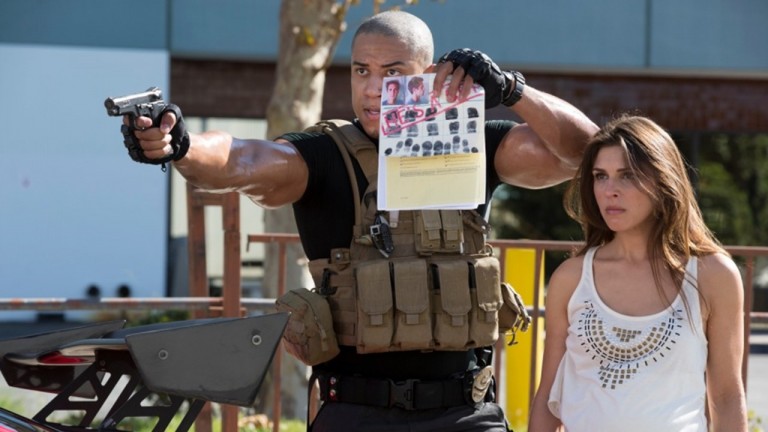 By far the biggest highlight of this movie and the most enjoyable to watch is Dio Johnson, who parodies Dwayne Johnson’s Luke Hobbs character from Fast & Furious flicks 5-7. He perfectly mocks all of Dwayne Johnson’s mannerisms, eyebrow movements, voice and even that thing he did with his pecks in Journey 2. This feels like less of a mockery and more of an homage to Johnson, and it livens the movie up immensely when he makes his debut.

But before that and most of the time he isn’t onscreen (which is sadly far too often), the movie loses steam. Surprisingly the actors are not at all the problem in this movie. Omar Chaparro as the movie’s villain Juan Carlos de la Sol warrants a good chuckle or two whenever he appears, particularly in a scene where one of his henchmen returns to him with information and he is far too impatient. Dale Pavinski as Vin Serento (in case you can’t figure it out from the name, a parody of Vin Diesel’s Dom Toretto) is also pretty funny too.

But besides these sparse moments of laughter and a pretty spot-on Dwayne Johnson parody, you surely won’t be surprised to find out this movie is incredibly lazy. The naming of the characters has got to be the laziest work done here. If you think Vin Serento sounds lazy, just you wait. The parody of Jordana Brewster’s character is named “Jordana”, and the one of Michelle Rodriguez’s is named “Michelle”. Our lead, an amalgamation of the characters portrayed by Paul Walker and Lucas Black is named “Lucas White”.

Parodying Ludacris is a character named “Rapper Cameo”, spoofing Sung Kang is “Cool Asian Guy” and taking aim at Gal Gadot is “Model Turned Actress”. Yes these are the actual characters names and not just nicknames. In Superfast!’s world someone named their daughter Model Turned Actress. 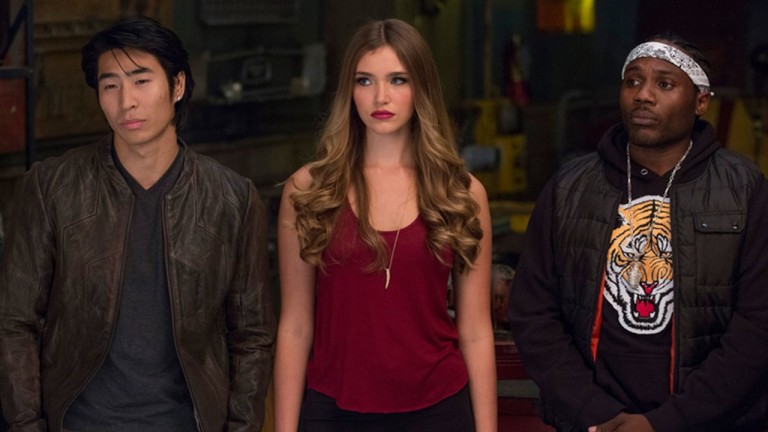 The supporting cast does very little in this movie – as was clearly intended – so you can’t really fault them either. Especially not Andrea Navedo as Michelle since following this movie she booked one of the lead roles in the highly praised CW series Jane the Virgin. Then again the pair have worked with Alyson Hannigan, Anna Faris, Kal Penn and Ike Barinholtz who have all also done great work in other projects.

And despite a budget of approximately $20 million, they seemed to cheap out when scouting for locations as most of the movie appears to have been filmed within the same 20 block radius. In the chase scene towards the end of the movie, swear down they filmed the entire thing on one street. I may be wrong but it sure seemed to have been.

In the end this is a movie from Friedberg and Seltzer so no, of course it isn’t good. With a more focused narrative, a couple of good laughs and a pretty solid cast, it is a huge step up from a lot of the duo’s other fare (especially Meet the Spartans, man that movie sucks).

I like to rate movies on a three-point scale of WATCH IT, STREAM IT or SKIP IT. WATCH IT means this movie is worth your time, STREAM IT essentially means if it’s on Netflix or Redbox, you could do worse. And SKIP IT means don’t waste your time. So for Superfast!, despite some positives, it has to be: 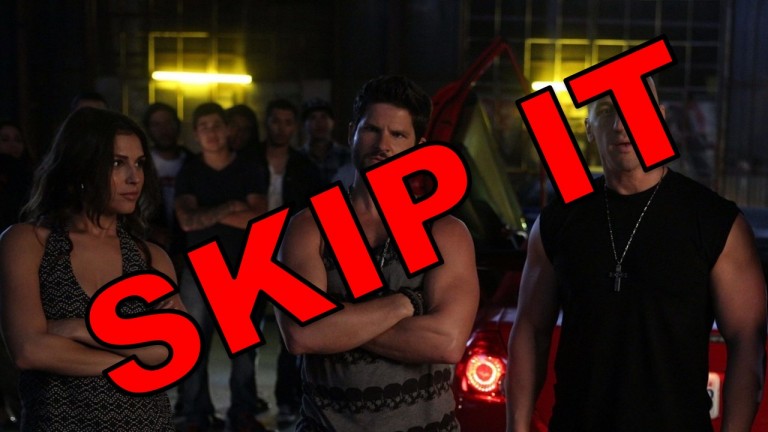 Above and below is a badass series of art from Ive Bastrash, an animator with a very unique style that he’s brought to the world of Alien. Ripley is the obvious focus here, and he’s…

Sunday night was one of the more refreshing nights I’ve had in a long time.   Thanks to my brother Alexander Berman and his long time friend and co-worker J.C. Khoury, an up and coming director…

When I was a kid, my dad assembled a wooden fort/jungle gym in the basement that I used to crawl all over despite the copious amount of splinters it gave me. Using my imagination, it…

My apologies to Paul and the readers for the lack of a post from me on Wednesday. Now that I’m back from the family vacation, I’ve actually spent quite a bit of time on the…

(click to enlarge) If you’re not a fan of Hayao Miyazaki’s films, you should be. The man has directed animated classics like Princess Mononoke, Spirited Away and My Neighbor Totoro. Howl’s Moving Castle is another…

If you’ve been watching movie trailers at all lately, you’ll know that out of all of them, there have been just two syllables that have made up the creepiest phrase in any film advertisement all…