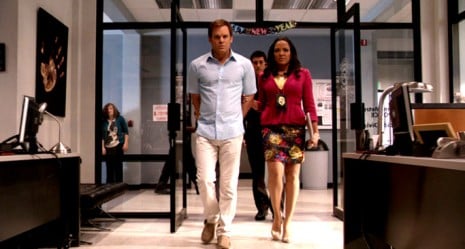 I watched two season finales on Showtime last night. One was suspenseful, well-written, powerfully acted and a great finale to the build-up of the season that came before it.

The other one was Dexter.

Yes, it’s true, Homeland had by far the better season-ender, but as we’re not here to talk about that show, I need to explain just why I was so disappointed with how Dexter ended this time around.

Dexter has always been known for powerful finales, and the show has created moments like Rita’s death and Deb’s discovery that have been jaw dropping final notes. But though a “major event” happened in the closing moments of this season, I’m annoyed about how it was handled, and I think the show dropped the ball this time around. 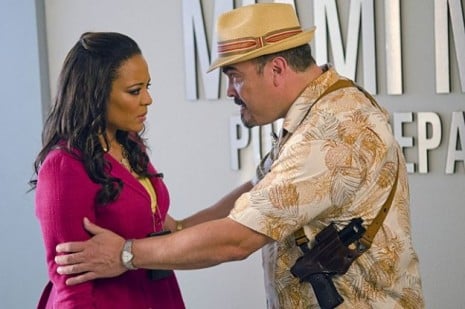 We’ll just start with the big moment itself, as there’s no point dancing around it for another five paragraphs. With La Guerta now knowing for certain that Dexter was the Bay Harbor Butcher, and also having evidence to implicate Deborah, Dexter had to make the tough call to kill her, even though she is miles removed from his long-standing code not to kill innocents.

His plan was to set up some sort of double murder between her and Astrada, though that would have been a rather odd story to sell. But what happens instead? Deb shows up at the storage container as he’s about to set up the kill. Now she can A) walk away and let Dexter do his thing with La Guerta or B) shoot and/or apprehend her brother who is clearly pretty bad dude. As La Guerta wakes up and starts trying to talk her into option A, Deb instead chooses C) Shoot La Guerta herself.

That’s certainly how I felt as I tried to process the inane rationale of both why Deb would do that, and also why the showrunners would feel that’s the best dramatic decision for the show. How does Deb go from being physically ill after learning about Dexter’s “killing of killers” philosophy to shooting not only an innocent, but a friend, in cold blood? That’s something that would have been a struggle for Dexter, but Deb? It’s unfathomable from a character development perspective. And since when did this show become all about Deb? This is supposed to be Dexter’s journey, and if La Guerta did have to be killed, it should have been a powerful moment where he, himself did the deed. What happened instead was clumsy, and a missed opportunity. 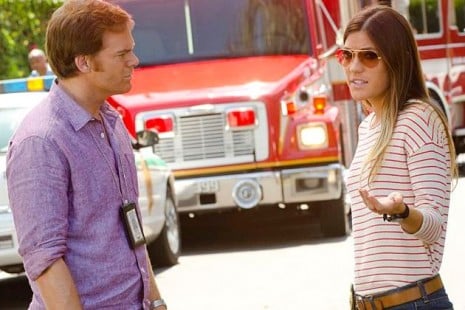 “Then I was like, I dunno, maybe I’ll just shoot her in the chest.”

I thought the braver decision would have been to actually have Deb shoot Dexter (non-fatally of course). That would have made for one hell of an interesting next season, but now what? We have the showrunner at the end telling us about how in season eight, the last season mind you, will give us more insight into Dexter’s origin. Dexter’s origin? Are you kidding? It’s time to kick things into high gear!

The title of the episode implied that something more interesting was going to happen than what did. Perhaps it was a longshot to somehow bring Doakes back from the dead ,but the way they used him was really lame. What exactly was the point of the three flashbacks that showed why Doakes thought Dexter was a creep? Did we learn anything there we hadn’t before? Certainly nothing relevant, and it was just a flashback  cameo for a flashback cameo’s sake.

And let’s not forget about Hannah, who escaped custody after making the questionable decision to stay silent about Dexter “because she loves him.” Is she really that much of a one-dimensional stereotype that she was willing to spend life in prison to protect a serial killer who put her in jail in the first place? And I was very disappointed to learn that yes, she really did poison Deb. I thought the show was actually pulling something clever by having Deb poison herself to trick Dexter into handing her over, but nope, everything was exactly as it seemed. To me that’s lazy, uninspired storytelling. 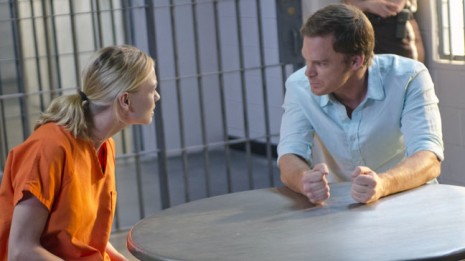 “Let me get this straight, I almost killed you, then sent you to jail, and you’re still in love with me? Girl, you crazy.”

Hannah’s character has always been all over the place in terms of motivation, but I really thought she was going to end up tied to La Guerta’s mounting list of evidence. Yet, that didn’t happen at all, and she simply flew away into the ether. Will she be back next season? Who knows, the show doesn’t seem terribly concerned with loose ends anymore.

Logistically, I’m wondering what happens next with La Guerta and Astrada in the shipping container. With Deb stupidly shooting her, with her registered, traceable, police-issue weapon, Dexter’s plan clearly had to be aborted. Did they chop them up and throw them in the ocean? Judging by how fast they made it back to the New Year’s party, that doesn’t seem like what happened. But hey, why explain something when you can just gloss over it?

Yes, I’ll admit I’ve had my own thoughts on how Dexter should handle its final season. I thought that he should indeed be discovered at the end of this season, and the final episodes should be him, his friends and the public dealing with the revelation. But if they did want to go down the route instead, there was a far better way to go about it.

After a pretty decent first two thirds of a season, things have fallen apart for me the last few episodes and I left disappointed with the way things were handled in this finale. After an abominable season six, I think the show is starting to meander a bit, and more often than not it feels like they’re making shit up as they go, rather than unfolding some brilliant master plan.

I suppose we’ll see next year. And maybe I’ll be one surprised motherf**ker.