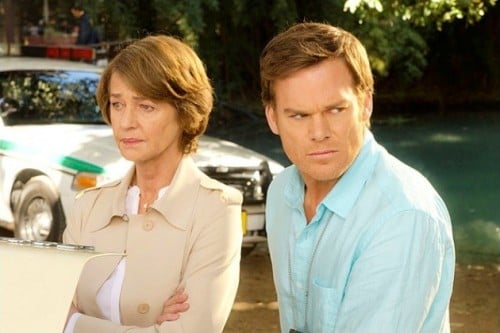 Dexter marches on into this final season, and as it’s still early, I really don’t have any idea where it’s all going. Things are starting to get more interesting as Deb unwinding has gone from worrying to downright dangerous for Dexter, so much so that her antics actually warrant a tranq in her neck.

A few things stood out to me this week, and have altered a few of my running theories. I’ve previously said that I believe Dr. Vogel is somehow manipulating Dexter, and may actually be in contact with or issuing orders to the brain surgeon killer.

Now, I’m not so sure. Why? Well, this episode inserted a telling scene where we finally see Dr. Vogel by herself, scared by a text message and grossed out by a new pair of brain pieces on her doorstep. There’s no one around for her to be play acting, so it appears we have to take her at her word that this killer is indeed stalking and taunting her, and she really is scared for her safety and genuinely needs Dexter’s help. This isn’t to say she’s an innocent character, and is kind of scary in her ability to egg Dexter on, but I don’t foresee some giant switch now where she’s the season’s bad guy. That really wouldn’t make sense based on what we’ve seen now. Also, why doesn’t she install a hidden camera at her front door if this keeps happening? 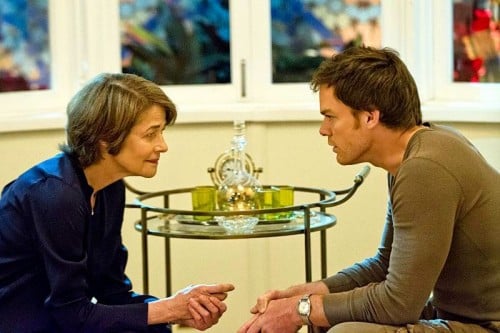 “So you could camp outside my house after these murders and wait for him to deliver the brain.” “Nah, too easy.”

I continue to like her probing of Dexter, attempting to understand his odd brand of psychopathy, which I still maintain isn’t really psychopathy at all. She claims that Dexter only loves others because of what they do for him, but I don’t believe that’s true. Dexter has never struck me as particularly selfish, or really all that manipulative of those he loves. Sure, he lies to them to protect himself, but it’s to protect them as well. Look what’s happened to Deb once she did discover his secret.

Deb is off the rails on a whole new level, barely escaping a DUI and being drunk for pretty much the entire episode. Dexter tries to show her that she’s done good by showing her a guy she’s saved (uhh, how did Dexter know when that dude’s family dinner night was? using his stalking powers for good, I guess), but it’s no use. Her next decision is to get drunk and burst into the police station and confess to killing La Guerta.

Fortunately, she does this to Quinn, who obviously thinks she’s bonkers. Dr. Vogel and Dexter come in, subdue her and haul her ass out, also swiping her written confession that would have implicated Dexter. I’m really not sure how Quinn doesn’t suspect ANYthing is unusual here, and the show likes to forget that Quinn was once about half a second away from finding out Dexter’s secret himself. Does he really not see anything shady here? I’ve complained about his useless plotlines for a while now, but I’m hoping he’s going to start to become more relevant in what’s going to happen with Dexter’s ultimate fate. 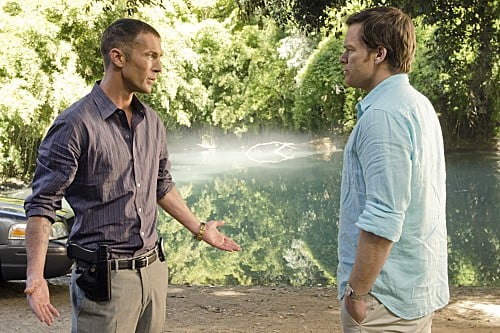 “Yo Dex, your sister is a wack job. More so than usual.”

Deb is a serious problem for Dexter now. She kept it together last season, but killing La Guerta made her snap, and now she’s demonstrated that she’s willing to turn both herself and Dexter in to alleviate her guilt. I suspect that Dr. Vogel will try to condition her out of such desires, but she’s pretty messed up and I’m not sure what sort of psychological cajoling will work on her.

The brain surgeon killer remains in the shadows, which is odd for the show which usually shows the audience its big bads pretty quickly. I still think it may end up being someone Dexter knows, which is why they’re hidden, but I’m not sure who that would be. I think his MO is one of the lamer ones we’ve seen from Dexter’s grand adversary list, but I suppose if you go too over the top you get the stupidity of Travis Marshall and his gaudy murder tableaus. There has to be more to this brain surgeon killer if they’re going to make him Dexter’s final foe.

Odd moment of the episode: There’s something up with Deb’s boss, the Boondock Saint, but I can’t put my finger on what. I think it’s more than just him wanting to get in her pants. This is the second time he’s offered her some sort of homemade feel-better cocktail, which seems suspicious. I’m not sure what he’d be giving her or why, but it definitely stood out to me, and I can’t imagine there’s nothing to that. Or maybe it’s just the world’s weirdest red herring like stupid Louis Greene and his stupid dead end plotline. But anyway, I’m keeping an eye on him. 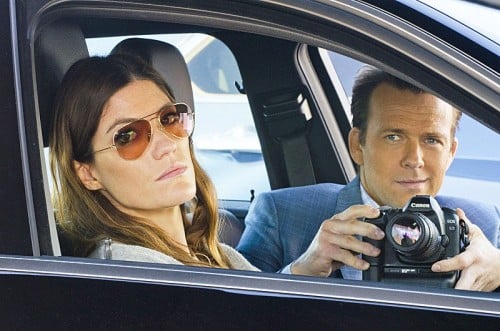 If he turns out to be evil, Deb officially has the worst luck on the planet.

I’m intrigued because I don’t know where this is going. Dr. Vogel seems trustworthy at the moment, the brain killer is a complete mystery and Deb is about to be committed. I’m still waiting for Hannah McKay to show up, as she’s supposed to be back this season in some capacity, though I can’t say I miss her character at all. I’m Dr. Vogel will be fascinated once more about Dexter’s supposed “love” for her.

Still, interesting season so far. Just hoping things start to really ramp up into insanity by the end, and we close with a bang, in some form or another.

The final season of Breaking Bad has been an emotionally exhausting ride, no episode perhaps more than last night’s. And honestly, that’s really all I can say without giving anything away, so I’ll just dive… 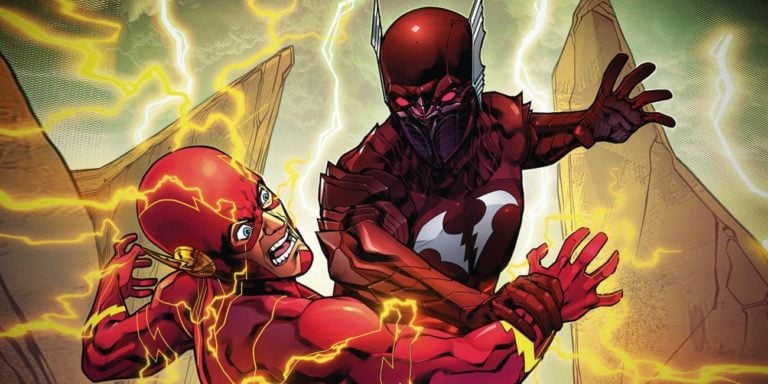 Recently, an episode of The Flash showed a museum from the future of the setting. As a result, it should come as no surprise to learn that the museum was crammed full of cameos. However,…

If you’ve been following my thoughts on Netflix’s resurrection of Arrested Development, you’ll know that I loved with two caveats. The first was how often and how widely they split up the cast from one…

If you needed further evidence that The Walking Dead has reached a new quality threshold with Scott Gimple as showrunner, look no further than last night’s “Internment.” Somehow, he’s managed to take a simple infection,…

Oh Firefly, the mere mention of you makes me both tremendously happy and terribly sad all at once. If it does the same to you, you may be interested in owning a piece of the…

Why do I feel like “Being on Sesame Street” is the new “Hosting SNL” for the “so-hot-right-now” actor crowd? Such is the case today with Benedict Cumberbatch who has stopped by the show in order…