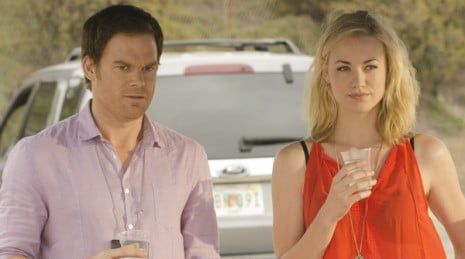 I genuinely like this season of Dexter, something I can safely say I did not feel last year at this time. In season six, Dexter started to feel almost procedural. There is the big bad killer, Dexter spends all season hunting him (them) and puts an end to the spree amidst a sea of useless subplots.

Not so this time around, and this is the first season since the second one to truly break from this format. Yes, there’s a big bad villain, Isaac, but it’s not the usual game of serial killer cat and mouse. Rather, now Dexter’s engaged in a battle of deadly mental chess with the mob boss, and it’s a new dynamic we haven’t seen from the show before.

And the subplots? Far from useless. We have LaGuerta looking into the Bay Harbor Butcher killings again which is a big deal for Dex. We have Deb attempting to deal with her newfound knowledge of Dexter’s ways, something that is not getting any easier as time goes on. 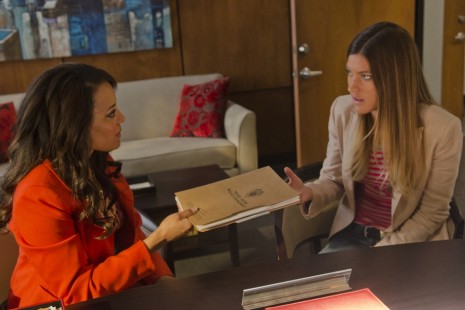 I believe the word “fucknugget” was used shortly after this scene.

The closest thing to a useless subplot we have is Yvonne Strahovski’s serial killer apprentice story, but even that took an interesting turn this week. It seem a bit obvious that they were setting her up to be a love interest, but that seems to have been a red herring after this week. Dexter discovers that she wasn’t unwillingly dragged along on this murder spree, she actually took part. I’m not sure why exactly he revealed all this to her face, but you have to wonder now, will she end up on Dexter’s table? Does killing on innocent on one heated occasion meet Dexter’s code these days? Although I have a hunch she might have a few more secrets in her time since Wayne was imprisoned.

I’m curious to see how far this La Guerta Bay Harbor Butcher thing is going to go. It seemed promising, but with Deb hiding the photo, it might start to fizzle a bit. What else does she have to go on other than a hunch at this point? Perhaps we’ll hear more about that later, as we’re only halfway through the season and I predict something big may happen in the finale. There’s only one more season to go after all.

I’m really impressed with the way the show has handled Deb’s discovery of Dexter’s secret. It would have been easy to make her a convert to his worldview after an episode or two, or she could have shunned him completely. But rather we’re somewhere in the middle. Yes, she “understands” what he does, but she is not okay with it, and really does not want to help Dexter. She’s caught between a rock and a hard place and it shows in every scene. I’ve never been a huge Jennifer Carpenter fan over the years, but I have to say she’s been doing a great job this season. 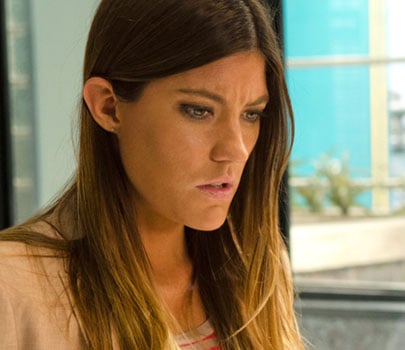 As for Dexter and Isaac? I’m not sure what the next chapter is there. Isaac is in prison with very clear evidence placing him at the scene of a triple homicide. Will he use mob influence to get the evidence thrown out? Will other hitmen start coming after Dexter? I though Louis’s death was going to come back and haunt him from a criminal perspective, but it doesn’t appear he’ll be taking the fall for that murder any time soon. Rather, Louis was just the mechanism for him to discover he was being pursued.

After this week, things do seem to have stalled with La Guerta and Isaac hitting dead ends in their pursuit of Dexter (knowingly or unknowingly). Maybe that means that next week Hannah and her issues will take center stage, as she was given relatively little time this week, and her story seems to just be getting started.

UPDATE: WHAT THE HELL IS WRONG WITH YOU PEOPLE? HOW CAN YOU NOT UNDERSTAND NOT TO POST SPOILERS AT THIS POINT? I HATE YOU ALL. I’m not sure there’s another show where I’d just post…

After being on hiatus for over a year I’ve decided to step back into the ring and talk about some of my favorite shows of past, present, but mainly past.  I’m the old fart on…

If you’re not watching Parks and Recreation yet, what the hell is wrong with you? There are like, four funny shows on TV now, and Parks and Rec is definitely in the top two. Get…

Impressionist extraordinaire Steve Love is back with a fresh batch of Game of Thrones impressions, mostly inspired by season four. We’ve seen a few of these videos from his so far, but this is the…

For the majority of television shows that last more than 3 seasons, the show you see today is usually way different from the original show you saw three years ago.  Not only do characters develop…

I’m currently on an expedition to finally, finally catch up with Doctor Who ever since I started watching the show (the new series) about a year ago. Seven twelve to fourteen episodes seasons (with Christimas…