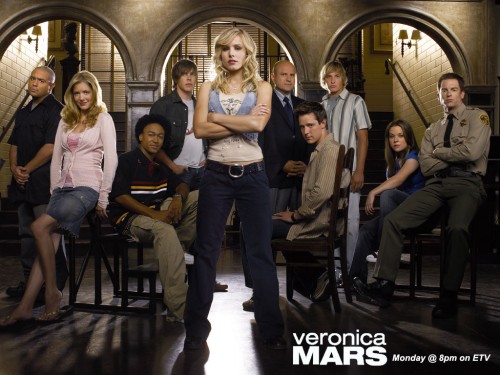 Well how about this? I knew we were using Kickstarter to fund video games and probably-going-to-fail consoles, but full length feature films? That’s a new one. But it’s exactly what’s happening now.

As of last night (when I wrote this), fans swarmed a Veronica Mars Kickstarter to raise $2M in about ten hours to full fund a feature length movie for the long-dead show. There are many shows with devoted fanbases who wished their program of choice would come back, but I had no idea that Veronica Mars still had this many die hard fans. Warner Bros. greenlighted Rob Thomas to do the Kickstarter to gauge “fan interest.” Well, I think they have their answer.

But I have questions about this now. Can a movie studio really get away with having the people who would pay to see the movie, actually fund the movie and then pay for tickets on top of it? I mean I guess when you buy a ticket, you’re subsidizing what it cost to make the film, but to pay $10, $20 or even $100 or more ahead of time? On the surface, it seems insane.

Is it really though? I don’t think so. This may seem odd from the outside for those of us who aren’t huge Veronica Mars fans, but pretend it was a show YOU loved. Would I be doing the same for a fundraiser to bring back Firefly or Arrested Development (if Netflix wasn’t)?

Yes, I would. Absolutely. It’s not just about pre-paying for the ticket price, it’s about believing that you’re doing your part to see that something you love lives again. Kickstarter is not an investment, it’s a charitable donation that makes you feel good about yourself. Sure, kids in Africa could probably use water instead of you paying for Kristen Bell’s next pair of jeans on set, but that doesn’t matter. It’s the idea that you have some small part in reviving something you thought was dead. I’d shell out $100 to feel like I helped put Firefly back on the air.

This won’t work often though, so Hollywood shouldn’t get any bright ideas. For example, Michael Bay couldn’t put one of these up and raise $200M to make Transformers 4. The money is too great for this to work for most films or shows, and the fanbase has to be absolutely RABID for this to even come close to succeeding. That said,  I’m wondering what will happen now that this has panned out for Veronica Mars. What other dead stories will come out of the woodwork begging for a cash resurrection?

Well, I wasn’t expecting to wake up first thing Monday morning and have my mind blown, but here we are. It’s common knowledge that The Phantom Menace sucked pretty hard, and is by far the…

From the crappy drawing to the spelling on the bottom, I’m pretty sure this wins my award for crappiest Black Swan poster so far. Paul, where’s our review?

Happy Halloween you sexy Unrealtors you! Sorry I missed last week’s trailers. My wife and I celebrated having our second child so I took the week off. There was a post earlier this week about…

What you’re looking at here is infamous Roman Emperor Caligula on the left, and infamous Ruler of the Seven Kingdoms Joffrey Baratheon on the right. The resemblance is uncanny, but the two have more in…

From artist Peter Breese comes a pair of portraits of the Lannister twins, Cersei and Jaime. They’re limited edition line drawing prints, though sadly Tyrion and Tywin are nowhere to be found. “But what about…