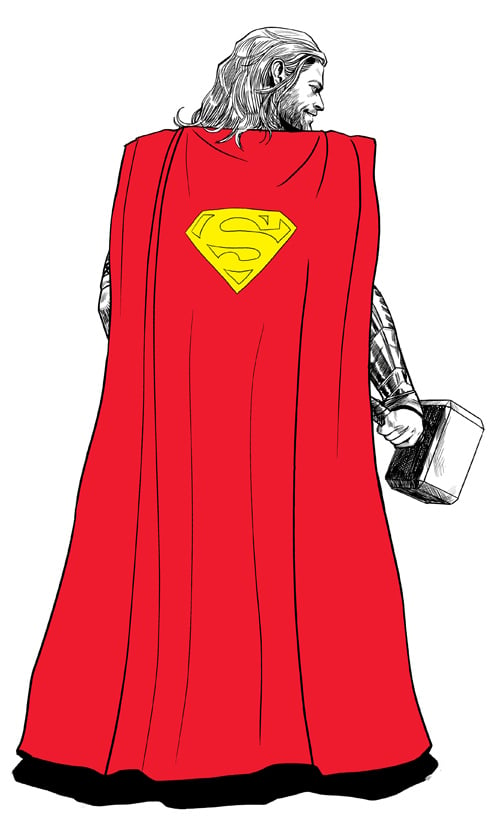 I’m not going to pretend I thought of this question all by myself, as I pulled it from a rather fantastic article at National Post that I suggest you all read right now. Then come back here and discuss.

If you couldn’t be bothered to, the thesis is that between Man of Steel and Thor: The Dark World, Thor actually felt more like Superman than Superman did. Man of Steel was dark to the point of being soulless, as Superman executes his foe amidst a ruined Metropolis where hundreds of thousands of citizens have likely died. Yet, Superman feels like he’s failed to connect with Earth as a whole, even Lois Lane, his designated love interest. Thor, meanwhile, is a bit of a lunkhead, but he feels a lot more like the “people’s champion,” and has real connections with earthlings, be they his Avengers buddies or Jane and her cronies.

I understand the point, and now that I’m reflecting on it, I have to agree. I actually liked Man of Steel, far more than most apparently, but Marvel seems to have captured something about superheroes that just…clicks. DC, not so much, as evidenced by two mediocre Superman offerings in the last decade, and a failure to get any other films off the ground outside Batman. And what of Batman? Nolan’s Dark Knight trilogy is amazing, yes? Correct (in my estimation), but it succeeds mostly because it managed to create truly impressive and memorable villains. A common complaint was that they often overshadowed Batman in his own movie. Batman wasn’t the reason the most recent Batman trilogy was good. He’s defined by his villains, whereas Marvel has the opposite problem, and Loki remains the only remotely interesting villain they’ve ever made.

What do you think about all this, and the Thor as Superman idea?