Unlike its titular hero, Marvel’s Daredevil isn’t trying to hide its identity in any way, shape, or form. Netflix’s first Marvel series (the first of four planned series, which will all culminated in the miniseries The Defenders) kicks off its run confidently in “Into the Ring,” a premiere that doesn’t get bogged down in too much exposition or an unnecessary origin story. Instead, Daredevil gives viewers what they want right from the start: a dark and compelling superhero show, one grittier and more violent than anything Marvel has done in recent years on either the big or small screen.

As hinted at above, Daredevil forgoes giving us the full backstory of Matt Murdock (Boardwalk Empire’s Charlie Cox, giving a strong performance here with a solid and believable American accent) and dives right into his days (or rather nights) as Hell’s Kitchen masked vigilante. And it’s clear from the get-go that this show will be unlike any other Marvel series or film out right now, with Matt taking a brutal beating from a bunch of thugs as he rescues a group of women from a human-trafficking ring. This isn’t Coulson and the gang making jokes as they battle Hyrda on Agents of S.H.I.E.L.D. or Peggy trading barbs with Howard Stark before getting down to business on Agent Carter. Matt is a lone wolf attempting to do some good in a horribly corrupt world, and both he and the show understand the danger that comes with this mission.

However, while Daredevil is certainly more brooding and bloody than many of Marvel’s other projects, that doesn’t mean that the series lacks humor, as shown through Matt’s relationship with his friend and partner Foggy Nelson (Elden Henson), which brings a good bit of lightness and fun to Matt’s day job of being a lawyer. Foggy is easily one of the best parts of “Into the Ring,” as the Daredevil writers, along with Henson, who is giving a great performance here, are able to turn him into a fully-formed person in just one hour-long episode instead of having him simply being Matt’s “funny sidekick.” Although Foggy isn’t dressing up in black and going after criminals throughout the night like Matt is, we’re still shown how kind and caring he is through his actions with his partner and with Karen (True Blood’s Deborah Ann Woll); both he and Matt are seeking justice, even if they’re not going after it in the same exact ways.

Speaking of Karen, it’s so good to see Woll in a project that knows how to use her talents and provides her with a compelling character to play (while she had some good material in the early seasons of True Blood, Woll, like the rest of the cast, wasn’t given anything noteworthy in the HBO drama’s horrendous later years). Her interactions with both Matt and Foggy (but particularly Matt in this first episode—their conversation in his apartment was as beautifully shot and well-acted as anything else in the premiere) are well-paced, as the three grow from strangers into a bit of a family by episode’s end, and that’s a credit to both the writing and the chemistry between Cox, Henson, and Woll.

And ultimately, it’s the characters and their chemistry that makes Daredevil Marvel’s most impressive TV venture yet. Unlike Agents of S.H.I.E.L.D., which burned through most of its first season before making its characters feel real and believable, Matt, Foggy, and Karen are strongly defined right off the bat, and it’s the fact that the three of them talk and act like real people, the strength of depth of their characters, that ensures Daredevil is so enjoyable to watch.

Although we only get a hint of what the bigger arc of this first season will be, with a couple of scenes showing us some of the city’s many criminals (although no Kingpin yet), that doesn’t make Daredevil any less exciting. The show’s smaller, quieter scenes are just as enthralling as its major action sequences, and they combine for a stellar first hour that has me excited to see what the show will be able to accomplish throughout the remaining 12 episodes of its first season.

– Thanks for joining me for Daredevil reviews here at Unreality! I’ll be trying to publish at least two reviews of the series a week, as I make my way through it on Netflix.

– Also, full disclosure: I’ve never ready any of the Daredevil comics, nor did I see the Ben Affleck movie when it came out years ago, so I’m going into this series with pretty much no previous knowledge of the source material or its characters.

– The look of Daredevil is something special. Phil Abraham does a fantastic job at utilizing lighting and different color schemes in this first episode, giving Daredevil a timeless and somewhat noir-ish feel to it.

– The flashback scenes between Matt and his dad work really nicely throughout “Into the Ring.” They’re used to inform Matt’s character rather to just provide us with background information.

– “Into the Ring” also opens and closes with two extremely captivating sequences: the flashback of Matt first becoming blind followed by his confession to the priest in the present day, and then the closing montage of Matt’s continued training spliced between the actions of Hell’s Kitchen’s criminals, letting us know that he has quite the battle ahead of him and needs to be prepared.

What did everyone else think of Daredevil’s first episode? And how far have you binged your way through the show’s first season? 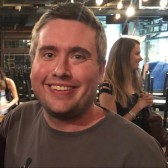 Chris is the Managing Editor of TVOvermind. A graduate of Saint Joseph's University in Philadelphia, where he majored in English and Film, he has been writing about television for over three years and has written about several different television shows, such as New Girl, Breaking Bad, Glee, and Homeland. Contact him through Twitter (@ckinger13) or email (chris@tvovermind.com).