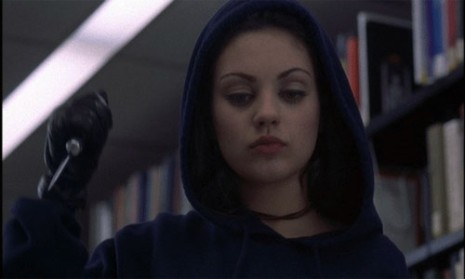 So this is is normally Nat’s segment, and I apologize for stealing it, but after watching this movie this weekend, I couldn’t help but chime in.

I was browsing Netflix for a horror movie to pregame to this Halloween weekend before we went out to the bars. As I scrolled through the options, my thought process was “there’s a SEQUEL to American Psycho?” and then immediately “And it STARS MILA KUNIS?” Sold.

What I did not expect was literally the most disparity I’ve ever seen between a movie and its sequel. Even if this was straight to DVD, which I assume it was in 1999, I have no idea how whoever owned the rights to this story ever signed off on such a trainwreck of a film.

Mila Kunis is back in her that 70s show days, meaning she’s a few shades paler and not quite the bombshell she is today. The film opens with a flashback that shows her as a child killing the great Patrick Bateman with an ice pick as he carves up her babysitter’s netheregions. She escapes unnoticed and is never tied to the crime, but decides that her new life’s ambition is to catch psycho killers like him. 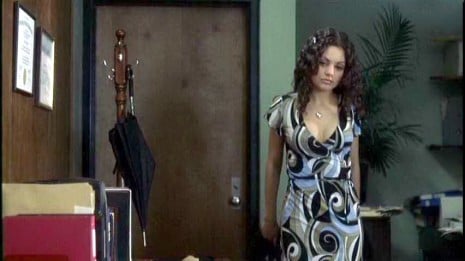 To do this, she attends college in Washington, and attempts to land a TA position in order to secure early admission to Quantico, the FBI’s super school.

Annnnd of course, this involves her killing all the other candidates vying for the spot. Wait what? Yes, if you haven’t guessed from the picture, her brief brush with Bateman has turned her into a killer herself.

But this general framework of a plot doesn’t adequately describe the ridiculousness of this film. Her professor is William Freaking Shatner, whom she eventually kills in a plot twist that doesn’t make sense, given the fact that she’s trying to be his TA, and that’s rather hard when he’s dead. If you’ve ever wanted to see Mila Kunis seduce William Shatner, this is going to be your one and only chance to do so.

There are many brutal murders in the film committed by Kunis, but the one that made me actually fall over laughing was when she went out with one of the TA applicants, led him into the bedroom, and proceeded to STRANGE HIM WITH A CONDOM, adding in “ribbed for her pleasure” after she did so. Wow. Just…wow.

It’s a truly surreal film, and it’s as disjointed from the original as The Mighty Ducks would be as a follow up to The Godfather. It just doesn’t make any sense, but it doesn’t mean it isn’t worth watching for the awfulness. 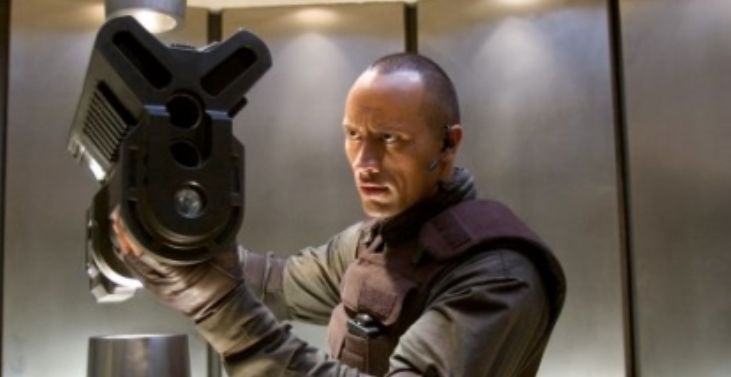 No, The Rock isn’t going to make it on this list, at least not for his role in Doom (and he’s a huge movie star now so we don’t really consider him a wrestler anymore). …

This week I’ve elected to shine a spotlight the troubled career of a talented independent filmmaker who could been the next John Carpenter or Guillermo del Toro if he’d been given the chance. Instead, he’s…

Turns out they have hipsters across the pond too, and an England-based marketing agency decided to use them to remake American Psycho in a new way. Denim jeans are the new business cards, and beards…

It’s not very often you see a movie undergo a sex change, which is why I was curious to see how Angelina Jolie would step into the (similarly sized) shoes of Tom Cruise when she…

I guess it’s music week here at Unreality, as I really have just felt like jamming to some movie tunes the past few days. First it was Hans Zimmer, then yesterday I was reminded of…

I don’t feature as much cosplay here as I used to due to the fact that I now run an entire site devoted to that, but sometimes I find something so good that I just…