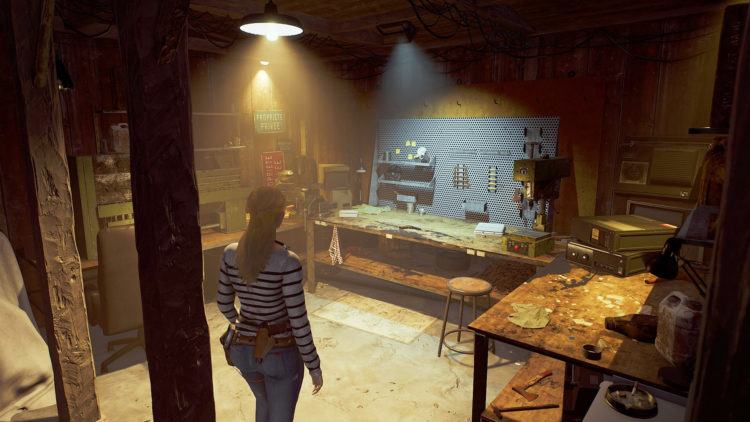 Broken Pieces is a psychological thriller that is set within a small fishing village on the outer rims of France. The game will be played from a third-person perspective via a fixed camera angle. Clearly, this is an homage to older cerebral horror games like Silent Hill and even Clock Tower. Players will take control of Elise, a girl who is an outsider to the coastal town of Saint-Exil. Shortly after settling in this area, Elise’s fiancee disappeared without a trace and strange events have been happening all over. A dangerous cult runs amok in this settlement and time seems to stand still. Thus, an enigmatic lighthouse is erected on the edge of town, overlooking all the occurrences that are transpiring. It is up to Elise to unfold this mystery and find her missing fiancee before he disappears forever. This game is being developed by an indie developer Elseware Experience and it is shaping up to be a unique survival horror offering.

This will be an intimate journey, with players following Elise every step of the way as she treks through this harrowing ordeal. Puzzles, combat, and exploration will be the three major pillars of gameplay for Broken Pieces. Additionally, the gameplay will drastically change due to the dynamic weather effects that the in-game engine has. The plot is deep and it will require keen investigative skills and exploration to truly unravel what is going on in Saint-Exil. Contextual clues will help players know what to do in the right direction. Especially when it is time to solve the number of environmental puzzles that this title has. This psychological thriller game is a little more flexible apart from its kin. The core gameplay mechanics may be similar, but there are some innovative additions and flexibility that help keep this indie feeling fresh.

Elise appears to be well-versed in combat and navigating through new terrain. She may not be a hardened soldier, like Jill Valentine from Resident Evil for example, but she seems to be self-sufficient. The combat in Broken Pieces was molded be to complementary to the fixed camera angle design. Elise will be able to position herself in strategic places during combat, fighting enemies without feeling like a puppet on a string. It’s a much more organic and realistic way to battle enemies within a game of this genre. Games with fixed camera angles were a staple to many survival-horror games of the 90s and early 2000s. With today’s specs, this is obviously no longer needed. Rather it’s just an artistic choice to capture the feel of claustrophobia and even frame up certain scenes that will have jump scares hidden in plain sight.

It is also worth mentioning that Elise will also have the ability to evade grapples from the cult that is trying to capture her. Even though Broken Pieces will be mostly third-person, players can also choose to play in first-person, as well. There will be specific moments where everything will need to shift to first-person for convenience. Like during sequences of exploring tight places and needing to get closer for solving particular puzzles. Not to mention that this game will be a little more cinematic as opposed to its counterparts. It will know when to zoom out and widen the scope of certain scenes to enable players to soak in the vistas. This will be especially apparent when traversing across large areas and more thorough exploration.

Some of the puzzles will be solved by having Elise have access to a device that can change the weather. Hence, the environment changes in real-time and will provide a new outlook on how to bypass certain situations. Thus, players can backtrack to certain areas in Saint-Exil to explore places that will now be completely different due to the weather. This is certainly a neat mechanic that offers additional hours during a playthrough, just to see how different weather can manipulate certain spots on the map. The narrative for Broken Pieces won’t be an automatic situation, rather it’s more manual. Players will need to actively find audio cassette tapes and listen to them in order to get a grasp of what’s going on. Taking time to go off the beaten path and seeing what other exposition is hidden will be essential to solving the mystery.

Broken Pieces is an investigation game at its heart. Venturing into the unknown is what makes these types of games so alluring. The mixture of time loops and weather manipulation certainly gives this indie more of a sci-fi vibe, than anything else. Almost like an epic X-Files episode. This game is currently heavily under development and there hasn’t been a release date locked in, yet. It initially was aimed to be released just for PC, but apparently, the developers have switched gears and are aiming to launch this game for other platforms. Needless to say, there are quite a few gamers taking notice of this indie. Especially, ones that have a deep-seated love for games of the past. Even though the game is obviously unfinished, based on what was seen in the trailer, there is no doubt that there is potential here.

There have been quite a few games being made this generation that is centered around France. This is because there are a number of talented developers out there that have roots in this country and they want to expand upon that. Broken Pieces has come a long way and things are coming together pretty nicely. As of right now, the release date for this title is sometime within the second quarter of this year. There is still quite a bit of polishing that this game needs. Even the trailer stipulated that some of the animations are mere “placeholders” before details of the finished product are established. Whenever it launches, expect Broken Pieces to be available for the PlayStation, Xbox, and PC. Hopefully, we will get one more trailer before release that will showcase the final game before it officially goes gold.