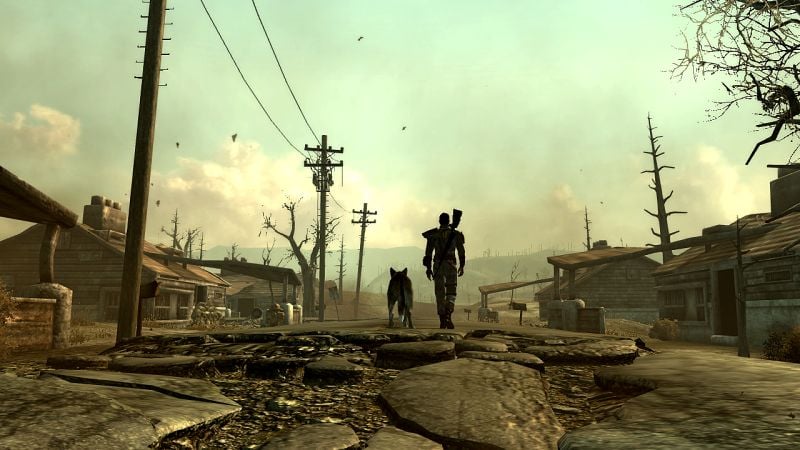 Last week we tackled Grand Theft Auto IV, and now we’re taking on Fallout 3. An amazing game in many aspects, Fallout topped game of the year charts all over the place, but that doesn’t mean there weren’t a few glaring flaws that had me banging my head against my wall.

1. The Leveling and Difficulty System is Absurd 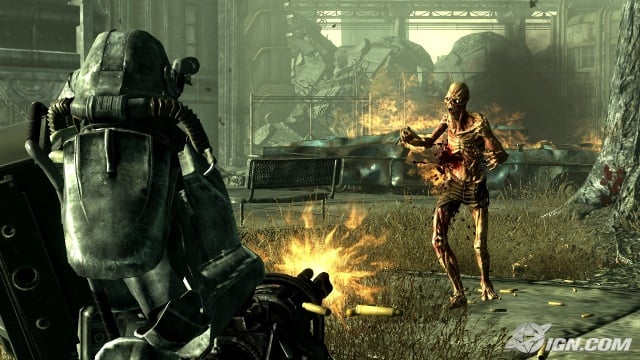 There are two problems with the leveling system in Fallout. The first is that there is a cap, which most players will reach in a relatively short amount of time. The second? Once you get there, there isn’t anything on earth that can kill you.

Also, when you level up, you’re only assigned a set amount of points at each level. It’s not like Bethesda’s past games where using a sword increases your melee points, trying to pick locks increases lockpicking or favoring a flamethrower would make big guns go up. It’s a limited point value increase at each new level, and in conjunction with the level cap, it makes it almost impossible to increase lesser skills like unarmed combat or science, because no one ever wants to waste points on them.

What is the point of “unarmed combat” in these games anyways? Am I really going to choose a bareknuckle brawl against a mutant bear when I could just stick a shotgun in his mouth?

2. No Customization Makes for Boring Combat 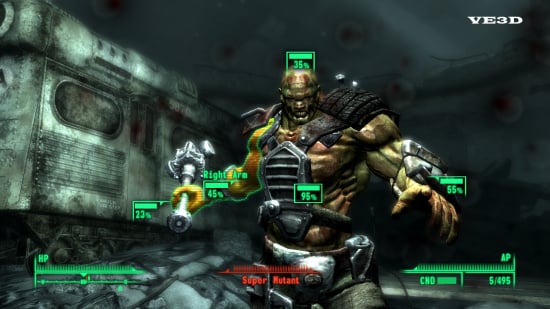 100% chance I’m getting tired of this screen.

Why do hardly any weapons have any sort of effects at all? I know there’s no magic in Fallout like there was in Oblivion, but man, we need to spice up gameplay a little. The endless repetitions of VATS and shoot, VATS and shoot gets boring rather quickly, and if you try to play the game like a typical FPS, the aiming system is nothing short of Neanderthal.

I once found a gun that lit people on fire when you shot them. Problem was it didn’t actually seem to do any damage. Play around with this more, have weapons be upgradable like in Bioshock or have them have special abilities like in Oblivion. Enough with the Call of Duty “all guns put holes in people” philosophy, this is an RPG in case you forgot.

3. The Dialog System is Questionable 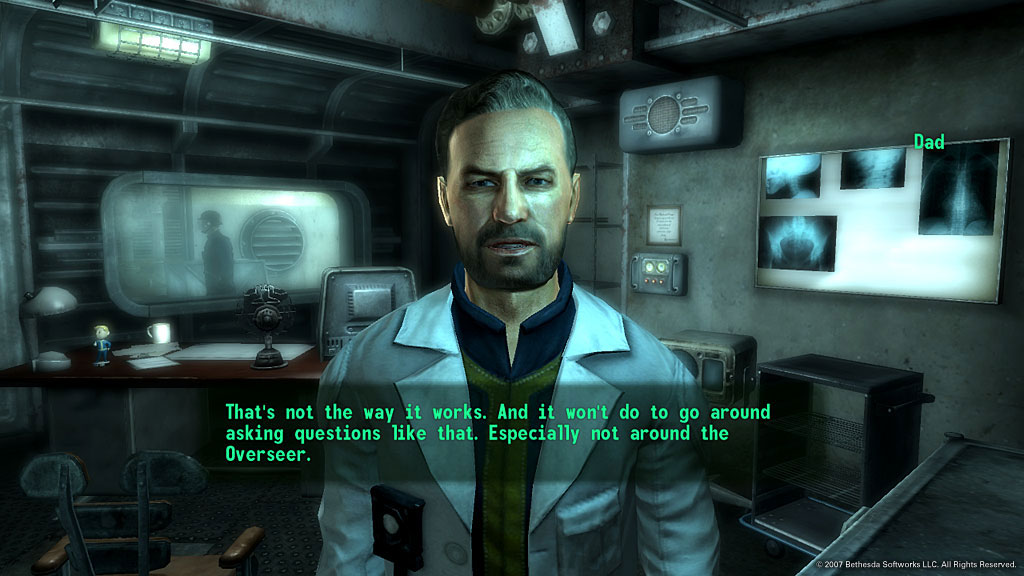 If you didn’t sound like Liam Neeson I’d punch you in the face.

Why can no one but Mass Effect seem to execute a dialog system correctly? Sure Fallout is a step up from Oblivion’s bizarre wheel conversation minigame that even after 100 hours of gameplay I didn’t fully understand, but it’s still pretty horrendous.

Speech now becomes a luck based activity. For example in a mission near the end of the game I was given a coinflip shot of talking an evil computer into blowing himself up and therefore ending a lot of my problems. I lost, and a flood of robotic super soldiers ran my ass out of town. Why the hell should that entire scenario come down to chance? Fix this Bethesda, it’s stupid.

4. What’s the Point of This Place? 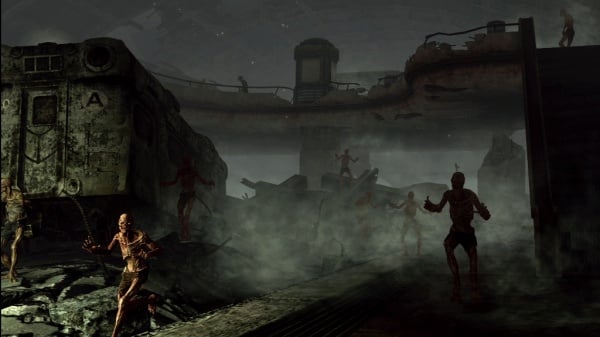 I can’t tell you how many buildings and mines and subway stations I came across, explored for forty-five minutes, and found absolutely nothing useful in them. Maybe I had to do a room by room, corner by corner, desk by desk sweep of the entire place, but I don’t have time for that bullsh*t.

In most games, “dungeons” usually have an entrance, monsters in the middle, and a prize at the end. But in Fallout barely anything has an “end” since it’s a grid-laid out building, and without some sort of FAQ or Wiki, it’s nearly impossible to discover treasures on your own. And god forbid I do find the “end room” and it’s just some computer set at some astronomically high decryption difficulty I can’t even touch because I haven’t upgraded the useless science skill. ****ing science. 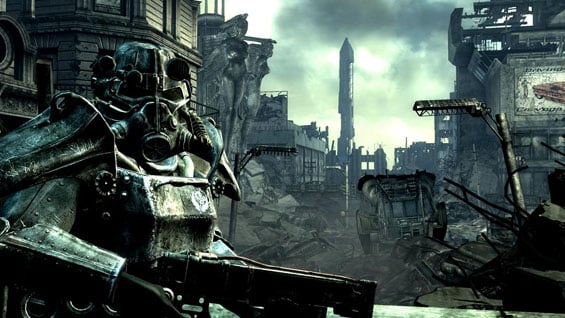 So wait, does war ever change, or no? I’m not sure.

Perhaps there is not greater pressing problem then the way Fallout 3 concludes. With all the endless amounts of hours that the rest of the game presumably took to craft, you would think more than thirty seconds of thought would have gone into the finale. Instead what we got was a flash of a few stills from the game, another Ron Perlman voiceover and the inescapable fact that no matter what “end decision” we picked, we had to revert back to a previous save to continue exploring the Wasteland.

This is rather stunning considering Bethesda’s last game wasn’t dumb enough to have a fixed ending. They have quickly realized their mistake, and are rushing to make the game playable past the ending in a bit of upcoming DLC, but a few months down the line, and costs money. It’s a blindingly obvious flaw that should have never made it to the final product.

(click to enlarge) I present you this image in honor of the recently released Red Dead Redemption. It’s what the Mario Bros might look like, had they existed in the Old West instead of uh,…

How do you make an accessory for a game system whose claim to fame is that you don’t even need a controller? The GAME BOAT is how. I always used to rip on Mad Catz…

I wonder if someday, in like 10,000 years there will be religions spawned out of modern day pop culture. Like you know that one movie with Sean Connery, where after the apocalypse everyone started thinking…

Alright, other than the fact that both Duck Tales and Street Fighter came out in 1987 (and so did I, for that matter), I can’t see how they have literally anything else in common, so…

(click to enlarge) I’ve got to say, I’m pretty honored to have a photoshop this awesome dedicated to something I wrote. In one of my other jobs, I wrote a piece detailing Activision’s new plan… 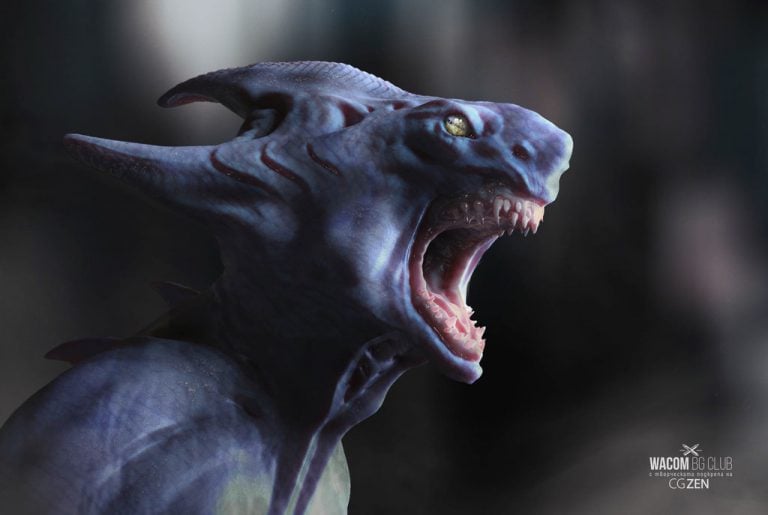 It’s always nice to come across great artists and I was impressed with what I saw from Miroslav Petrov today on Deviantart.  His work covers a wide range of genres and subcultures.   While his video…