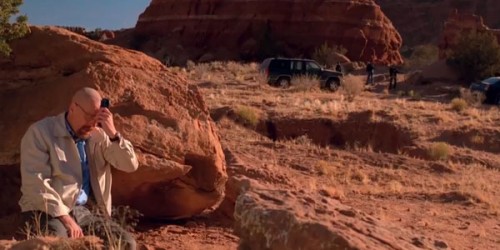 For all those wondering if Breaking Bad would get too artsy in its final episodes, and dial down the action, last night’s installment should be your loud and clear answer.

It’s really amazing how gripping every single moment of every single episode has been this season, and if you weren’t on the edge of your seat last night, you must have been watching on the floor or standing up.

The three-way game of cat and mouse between Walt, Hank and Jesse finally came to a head, and at long last, the role of cat and mouse switched around. Though Walt issued a kill order on Jesse, he was the one being toyed with for the bulk of the episode.

It took brilliant ideas by both Hank and Jesse in order to find Walt’s money. It was Jesse’s idea to go after Walt’s beloved cash, and to use Huell to do so. Hank played his part incredibly well during the interrogation, and got enough information to be useful to them. 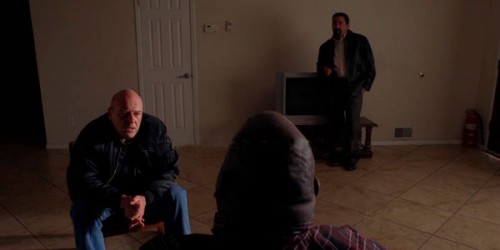 The shape of Huell’s head just…perplexes me.

Then it was Jesse’s turn to act, pretending first that he was dead, and then that he knew where Walt’s money was already, forcing him to sprint to the desert, leading them directly to it.

It’s the last ten minutes where things get really intense, and everything goes to hell. It’s an incredibly significant moment when Hank finally slaps the handcuffs on Walt, and the show took its time during that scene so we really felt the weight of it. I don’t think seeing someone read their rights has ever felt so gratifying before, even though we’ve seen in a thousand times across a hundred different cop shows.

But really, we should feel a little bad for Walt. In the end, he did make the “right” decision, at least to some degree. At first he was calling the neo-Nazis to come and take out Jesse and presumably his posse of maybe, Skinny Pete and Badger, but he drew the line at Hank and Gomez, once he saw that Jesse had been collaborating with them the whole time. And then once the Nazis showed up anyway, he pleaded with them to not open fire on his brother in law.

Well, he tried at least. 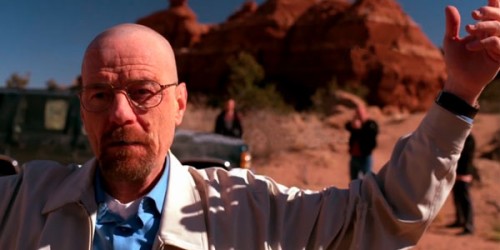 As soon as Hank made that phone call to Marie, I knew something was wrong. I didn’t expect him to survive until the end of the episode, and I’m not sure he did.

But would the show do that? Would they really open the next episode with the bullet ridden bodies of Hank and Gomez on the ground? I figured if Hank WOULD die, it would be shown onscreen very clearly at the end of the episode. It would be weird to give us all hope that he lived only to have him show up dead in the opening moments of “Ozymandias” next week. But it’s also weird to end an episode directly in the middle of a firefight, so who knows?

How COULD Hank survive though, really? I was pretty amazed that he and Gomez didn’t immediately die in the opening moments of the firefight, given the fact that they were up against five or six guys armed with automatic rifles and shotguns. Fortunately, the Nazis appear to be terrible shots, and at least onscreen, we never even saw anyone get hit.

It also seem rather ridiculous to me that they’re opening fire on the SUV where their beloved meth cook Walt is currently imprisoned. If they’re there to save him, you’d think that they might be a little mindful of which car they’re filling full of holes. And no one’s even managed to pop off a shot in the general direction of Jesse, the target they’re actually supposed to be going after. I guess the guys with guns are a priority, but seriously neo-Nazis, calm the hell down. One thing I am curious about is if Hank was recording Jesse’s call to Walt on the drive there. You know, the one where he admits to about six different felonies, including murder? I have no idea why they wouldn’t have thought to record that, as that’s evidence which is equally as important as the money, but it’s never mentioned whether or not that’s the case.

Walt was sloppy this week. He should never have said that stuff on the phone, any phone, but he was enraged to the point of insanity so I suppose that makes sense. What I think was stupid was his plan to flush Jesse out by going to Andrea and Brock’s house. If Jesse bolted in the public park, why would he fall for something that’s even MORE of an obvious trap? I guess we’ll never know if he would have as Hank intercepts the call, but it seemed like one of Walt’s lamer plans. And Walt doesn’t usually have lame plans.

I suppose there’s a third option, where Hank smartly called for DEA backup and the entire department swoops in to save them and Walt goes away anyway, but I’m not sure how likely that is. But we do have to somehow get to the point where Walt is discovered and destitute like we’ve seen in all the flash forwards. I suppose he could leave with the Nazis and whoever is left alive could turn over the evidence they do have, and he could be exposed and on the run afterward.

Anyway, this was a phenomenal episode as usual, and it’s hard to believe there are only three left to wrap everything up.

My name is Ozymandias, king of kings:
Look on my works, ye mighty, and despair!
Nothing beside remains. Round the decay
Of that colossal wreck, boundless and bare
The lone and level sands stretch far away.