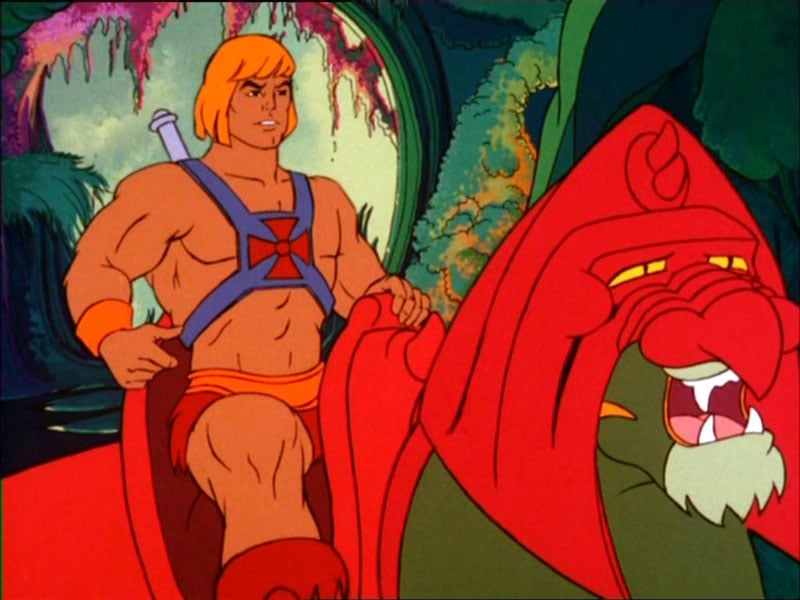 In my review of Princess Mononoke that was posted yesterday, I mentioned how much I liked Ashitaka’s red elk, Yakul, and how the mount had given me an idea for a post.  Well, this is that post.  To be honest, coming up with 10 non-equestrian mounts wasn’t nearly as easy as I thought it might be, especially since I tried my best to use mounts that are ridden repeatedly by their masters and not creatures that happened to be ridden once or twice in a movie or TV show.  If I had included video games, I’m guessing this list would have been a lot longer. 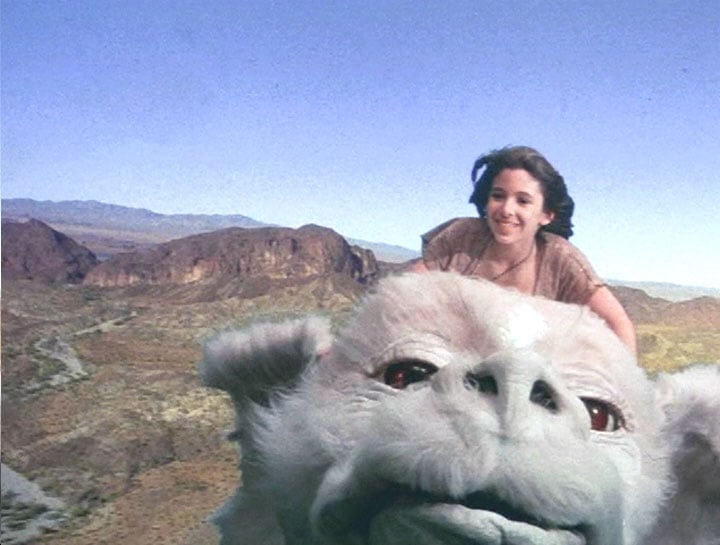 True, Atreyu started off riding Artax.  But once Atreyu’s steed was lost in the Swamps of Sadness, Falkor literally swept in and became the mount of choice. Falkor, in addition to having luck on his side, is capable of traversing gigantic distances and can even swim underwater.  Plus, he’s cool enough to torment some bullies, so you could do a whole lot worse than Falkor as your mount.

Battle Cat – Masters of the Universe 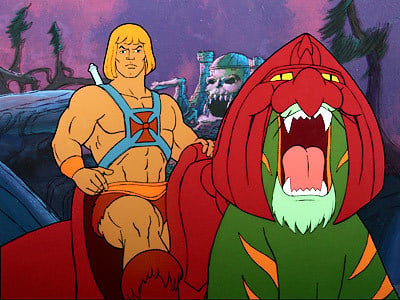 Cringer is a lazy, cowardly tiger that doesn’t do much besides shiver and hide behind Prince Adam.  But when Cringer becomes Battle Cat, he’s a massive, powerful beast capable of taking on the toughest enemies in Eternia.  It’s ridiculous enough that nobody can figure out that Prince Adam is He-Man, but wouldn’t you think that someone – anyone – could put two and two together and realize that the green tiger Cringer may actually also be the green tiger Battle Cat?  I dunno, it seems pretty obvious, and that battle helmet doesn’t provide much of a disguise.

Toothless – How to Train Your Dragon

Toothless, unlike Falkor, doesn’t talk, and his name is a huge misnomer.  His “breath weapon” never misses, and he’s practically invisible in the night sky. Toothless is loyal almost to a fault, and he’s pretty low maintenance, as all you’ll need to feed him is a bunch of fish.  Hiccup definitely lucked out in finding a mount as deadly and impressive as Toothless. 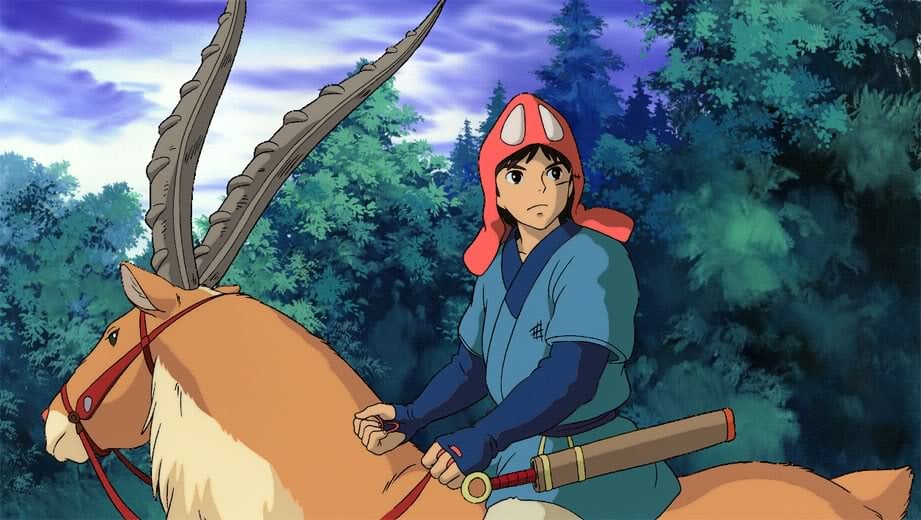 The inspiration for this post, Yakul is absolutely fearless and his loyalty is unquestionable.  And if he’s facing a wild boar five times his size that’s possessed by a demon?  Just another day at the office for this magnificent great red elk.  It takes a real bad ass mount to keep up with Ashitaka, and Yakul is more than cut out for the job.

Fell Beast – Return of the King 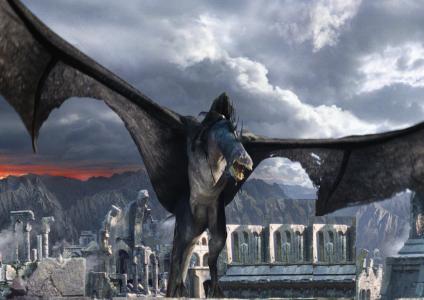 I’m not sure whether or not the Witch-king rides one fell beast consistently or if he has an entire stable of these creatures, but either way, I figured the fell beast was memorable enough to make this list.  Fell beasts look like they’re the epitome of evil: part serpent, part bat, and all monster.  Still, they can be killed, as Eowyn proved when she hacked one of their heads off. 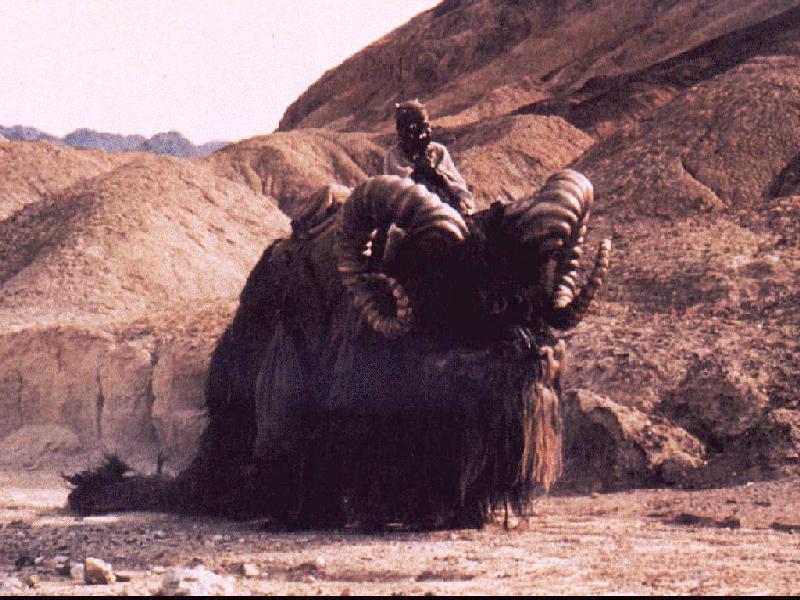 In the Star Wars universe, there are all sorts of weird creatures, many of which can be used as mounts.  I don’t know that any are more prominent than the Banthas, though.  Ridden by the Sand People or Tusken Raiders, Banthas are slow but powerful animals and are probably more useful for carrying cargo than they are for battle.  Still, they shouldn’t be messed with. 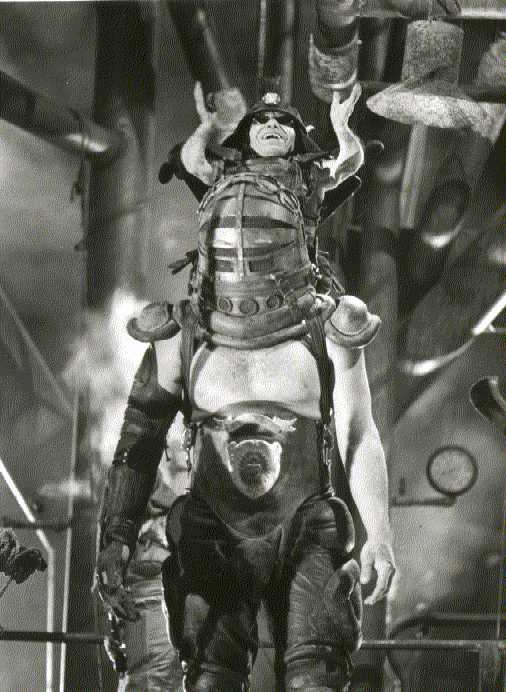 Oh yes.  I’m excluding horses from this list, not people.  Master is in charge of the refinery underneath Bartertown, but he’s nothing without his moronic bodyguard – and mount – Blaster.  Long before the Nintendo game Blaster Master, there was Master Blaster.  Bust a deal, face the wheel!

The reason I included landstriders is because I don’t believe the Gelflings ride them from time to time; I think that like the Banthas and Sand People, landstriders have formed a certain relationship with Gelflings, making them the latter’s preferable mount.  Landstriders are incredibly efficient for travel, what with their ginormous strides, and can even defend themselves (and their riders) with powerful kicks. 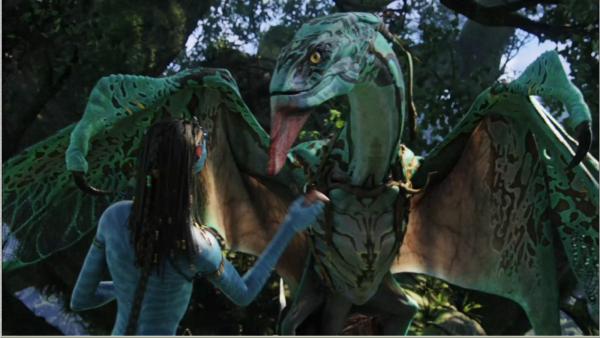 The mountain banshees in Avatar congregate in the Hallelujah Mountains, waiting for a young Na’vi to come along and make a connection, bonding the two creatures for life.  Neytiri’s banshee is Seze, a no-nonsense creature that can perform aerial maneuvers with more agility than a military jet. 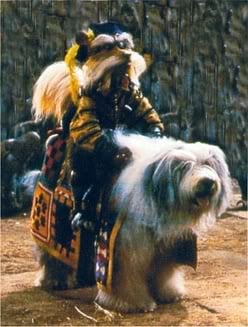 And finally, there’s Amrosius, the mount of Sir Didymus.  Apparently in the land of the goblins, foxes can walk and talk just fine but English Sheepdogs are still panting mounds of fur.  I never understood this.

Alright, so what did I leave out?  Anything glaring?  Hit me up!