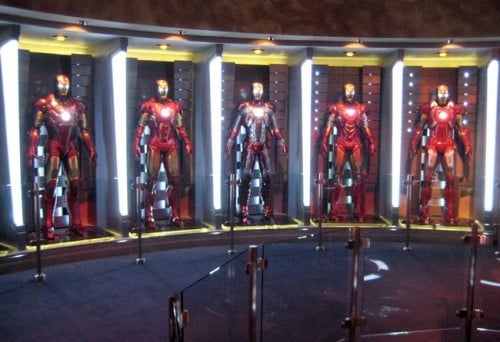 I haven’t been to Disney World in a number of years, and certainly not since they took over Marvel. I imagine that opens up whole new worlds of possibilities for attractions, and this gallery showcases one I had no idea exists, a mini-version of Stark Industries.

The photos of one vacationer give us a look inside the facility. In it are housed all of Tony Stark’s armor sets from all three movies he’s been in so far, with one or two from the upcoming Iron Man 3 I believe as well. This looks exactly like the room that gets blown up in the trailer.

I’m not enough of a comics nerd to know the difference between all the different Mark variants other than the first few when Tony was building his armor out of tin cans and Afgani scrap metal. I wonder if these are literally the props used for the film, or just really detailed replicas. Either way, would be cool to visit and see in person. Disney is more Star Wars and Marvel than it is Mickey and Goofy nowadays.

Check out the rest of the photos below: