Hoi, chummers; it’s nostalgia time. I’d say don’t call it a comeback, but in this case that’s exactly what we may be looking at. But first let me take you back to a time when most good music came from Seattle and nobody said Kevin Smith and Quentin Tarantino were overrated just to sound smart. A time when if you wanted to connect to the internet, you had to listen to your computer make god awful noises and then wait for minutes on end for a single image to slowly load one line at a time. A time when the concept of a fake nerd was like pretending to be a leper. And the phones? They were connected to wall sockets like freakin’ lamps or something.

In the 90’s I was a high school virgin and I’d like to think Shadowrun played a part in that second part. What the hell is a Shadowrun, you ask? You mean that multiplayer-only shooter that Gamestop sells for like five bucks tops? Yeah, I don’t know why that was a thing either, but back in the day Shadowrun was the coolest thing ever.

Think about all of my favorite things, some of which are likely your favorite things if you’re here. All right, I like science fiction and fantasy. I like post-apocalyptic dystopias and cyberpunk and made up lingos and guns. I like anti-heroes and kickass mercenaries and novels and evil corporations and virtual reality and monsters. I like role-playing games (video or traditional), Japanese culture, and, damn it, I like gritty stories. If only there was some place I could get all of these things at once…

Right, Shadowrun has all of those things and then some. It’s like Ghost in the Shell, Dungeons and Dragons, and The Matrix had a threesome baby, but before two of those things ever existed. Whoa, I think I just blew my own mind. Seriously, though, the first thing I thought when I saw the trailer to The Matrix was “lame Shadowrun rip-off”. This thing about ruled my life for most of my high school years and I’m pretty sure I still have a stash of the novels with the pages falling out of them in a box in my garage somewhere waiting to be excavated. 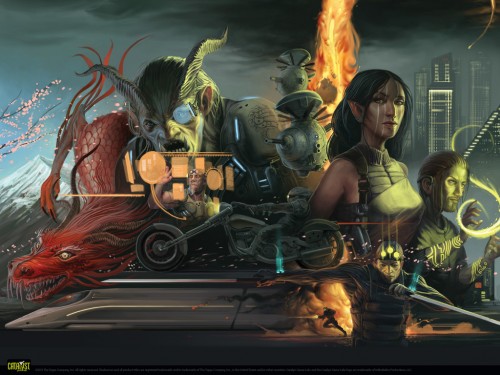 The multimedia franchise started with FASA’s pen-and-paper RPG set in a future version of Earth where magic returned to the world, mutating many humans into orcs, elves, dwarves, and the like and giving the long-abused Native Americans (who retained their connection to the Earth) the power to enact a spiritual apocalypse of sorts via a large scale Ghost Dance ritual. This threw the planet into chaos and allowed them to seize political power, segmenting the United States in the process and crashing the global economy, leaving the remaining megacorporations to govern and Japan as the last global superpower.

Citizens are branded with serial identification numbers before they are allowed proper jobs and many of those without are what are known as shadowrunners. They are essentially illegal mercenaries who usually make a living being hired to do the megacorps’ dirty work. This includes various coolness like espionage, hacking, wetwork, magic rituals, and even full-on assaults for particularly hostile takeovers.

I mentioned The Matrix before. Shadowrun’s cyberspace is actually referred to by that exact name and is a virtual reality environment where a person connects their brain directly to a computer to traverse the internet as a VR environment. Deckers –as they are called- use illegal programs tied to their cyberdeck hardware that can manifest as objects in the Matrix and defense programs appear as physical threats designed to fry the brains of unauthorized users.

As you can see, it’s a really complex universe with limitless imaginative possibilities and I’d say that the various creators have utilized it to the utmost. Most of the many novels I read were excellent, the most prominent being the Secrets of Power trilogy written by Shadowrun co-creator Robert N. Charrette. There were forty novels in all during the ten years that they were originally produced. Forty. Novels. 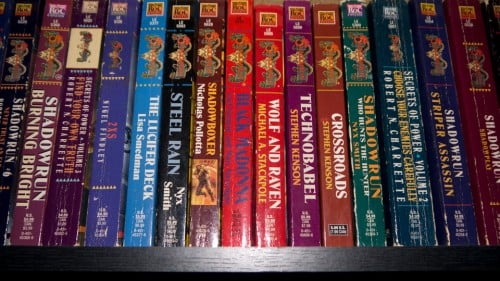 They featured everything from ghouls and vampires to weretiger assassins, dragon CEO’s, animal shamans, and technologically enhanced “street samurai”.  One memorable story focused on the harrowing experience of a character whose human form changed into a monstrous troll and saw him shunned by society, forcing him to take to the streets and learn the shadowrunner trade the hard way. It’s actually pretty hard to go wrong with concepts like these to work with.

Cool stuff, yeah? Someone should have made a video game or something. Oh wait, they made several. The only one I’ve played was the cult classic Super Nintendo masterpiece from 1993 that introduced me to the franchise and remains one of my favorite RPGs of all time. It was borderline flawless and followed a year later by a cool looking Sega Genesis game that I regrettably never got to play. That one appeared to have a much superior Matrix and better character customization, which was something that was shockingly lacking in the SNES title.

At this point one may be thinking that Japan would be all over this franchise due to the insanity of it all. Yes, the game was released there, yes there is a manga for it, and yes there was a Shadowrun video game released in that style; everything but an actual anime series. Supposedly, the video game even incorporated rolling dice into the gameplay in homage to the original work, which sounds really cool. Sadly, it game was for the Sega Mega-CD and gamers know how that worked out. 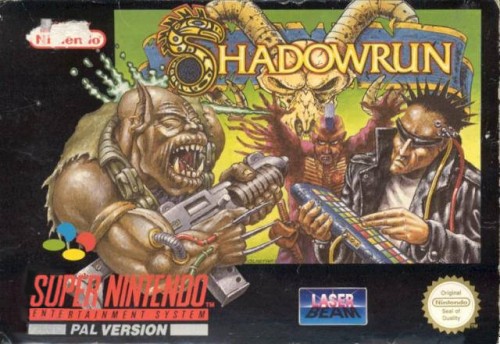 Let me just give a quick eff you to anybody who saw this on the shelves and thought “nah”.

So where the hell did this franchise go? It was never going to be a pop culture giant, but something this cool and varied with so much to recommend it shouldn’t just vanish. Shadowrun is still a thing on the tabletop gaming scene, but that is about as nichey as niche entertainment gets. Where are the films? Where is the television series? Not even comic? How did that never happen? They even stopped writing books. This is not justice.

Well the good news is that a comeback is being staged. I first took notice in 2007 when a new video game was released. My initial enthusiastic reaction of “ohmygawdrly!” was diminished when I realized that not only was the new game a shooter, but multiplayer only and without much to recommend it beyond the source material. What the hell? An RPG with dozens of great stories and a brilliantly-realized and fascinating world reduced to a second-rate Counterstrike wannabe? Whyyyyyyyy?

Thankfully, that is not all she wrote, so to speak. There are more books being published and thanks to the magic of Kickstarter and Steam, fans finally got a sequel to the 16-bit classics in the form of a little thing appropriately called Shadowrun Returns, released last year. 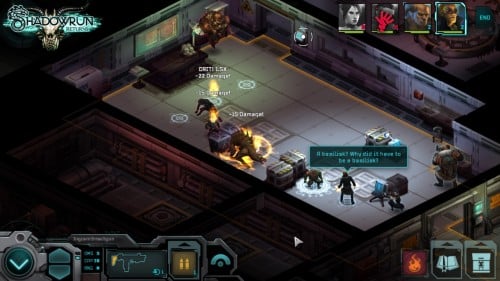 Take that, pics or it didn’t happen guy!

Yeah, I didn’t believe it either until I ran across the game while researching an article I was writing about obscure SNES RPG’s a few weeks ago.  As soon as I get my gaming schedule cleared up a little, I’ll definitely be buying this, assuming my crappy laptop can handle it. I may buy it anyways because if it makes enough money, it could get ported to consoles and help revitalize a franchise that is tailor made to make geek dreams come true but faded away before that was considered a viable business model. There is also a MMO in development.

Assuming you like stuff that’s awesome you might consider looking into this franchise if you’re nerd enough. New copies of the original novels are hard to come by, but used copies are pretty cheap online. Or you could go the route I took twenty odd years ago and get into the Shadowrun universe by playing the video game if RPGs are your cup of tea. Either way, it’s a shame this concept never really took off, but I’m glad to see it’s still kicking around.

httpv://www.youtube.com/watch?v=oJZI-54QmRc&feature=player_embedded This easter egg isn’t anything mind-blowing, but I thought it was rather cool. Apparently when you stand by a certain pool in Assassin’s Creed II for an extended period of time, you get a…

News broke today that Nintendo missed nearly all of their sales expectations for the year, and suffered an operating loss in the process. While the 3DS is doing alright, the Wii U is struggling desperately,…

Last week I briefly mentioned the fact that 2013 is shaping up to be the year of the console. We’ve already seen the Ouya in action, some Steam box prototypes (although it may not be…

The launch of the PS4 marks the first time I bought a console with my own money. Prior to that, my parents were the one who bought my consoles and games. I certainly had a…

Our friends over at OnlineEducation who brought us “A Day in the Internet” are back at it again with another polished infographic, this time filled with fun facts about the current state of the video…

A guest post by Mike Leaño 2012 was a watershed year in video games. This was a time when discussions about diversity and gender inclusion became more prominent in the industry as more video game websites…