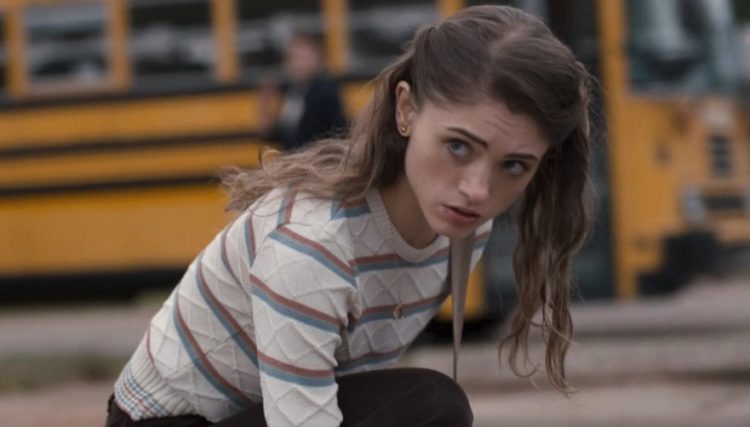 Exceptionally talented, beautiful and extremely elegant, Natalia Dyer is one of America’s prominent rising stars who began her career at a young age like many others and has gained experience in various roles to reach where she is now. Approaching each of her roles passionately, this star is set to become someone with the potential to go even further than she has reached already, but Natalia Dyer appears content with her slow and steady rise to prominence, unlike other young stars who begin their careers in the entertainment industry early who pick a wide variety of roles. But that doesn’t mean she is any less talented. She is very talented, and she is flexible with her roles. Natalia Dyer is a unique and talented young woman who appears content with taking her career slowly, rising with each role which she acts out both beautifully and naturally, gaining more fans with each role. But who is the person underneath those roles? Find out now in this article, 10 Things You Didn’t Know about Natalia Dyer.

Natalia Dyer is now 22 years old. Her star sign is Capricorn. She holds American Nationality while her ethnicity is English. Natalia Dyer was raised in Tennesse along with her siblings. From a young age, Natalia was talented, and she graduated from the Nashville School of the Arts, a school that is renowned for its mission of providing its students with high-quality instruction in performing the wide diversity of the arts, including dancing, music – piano, the guitar, the literary arts, and the visual arts. It’s a great place for a budding young actress to learn her craft.

2. She has a pet dog called Ozzy

Natalia Dyer likes dogs and they are her favorite animal. There are rumors she has a yellow-golden labrador named Spinee, but Ozzy is definitely real. There are pictures of Ozzy on twitter being held by Natalia and there are no other photographs of any other dog with her.

She played Clarissa Granger in the Hanna Montana movie. Two years later she appeared in a role in The Greening of Whitney Brown, where she played a character named Lily. She starred in an Indie film called I Believe in Unicorns, which had premiered on SXSW in 2014. Despite these roles, Natalia Dyer’s first standout role was when she played Nancy Wheeler in Stranger Things, a role she has played since 2016 filmed and streamed by Netflix.

4. She has won a few nominations for her acting, specifically for her Stranger Things role

5. For her role in Stranger Things she feels she has to believe in monsters

They praised her performance and “Sensitively observed and impressionistic.” For her role in Stranger Things, she watched classic movies such as Close Encounters of the Third Kind, Nightmare on Elm Street, Poltergeist, and others in order to prepare herself for the surrealism of the role and the show she was going to perform on for research. This is an achievement because she has admitted to hating horror movies.

6. She has a close relationship with her family

Her father once told her to “Question everything,”, which is claimed to be the best advice she has ever received. Natalia has a younger sister. This younger sister is seven years younger than Natalia. As a child, Natalia has had Attention Deficit Hyperactivity Disorder, and she is said to be anorexic. She also drinks a lot of water in the morning and she enjoys going out for walks.

7. Natalia Dyer began her career in acting when she was in elementary school

She staged a sprained ankle while she was attending a sports camp. Her parents moved her to a drama camp which luckily had an opening available for the budding actress, but that is where her interest in acting arose. From there she was later admitted into the Nashville School of the Arts.

She has said the other actress is great at what she does and gets down to the business of the role, but behind the scenes, she is a great person to be around. Natalia has said Winona is grounded and is fun, smiling and laughing with everyone.

9. She is extremely optimistic about life

Indeed, she shares that same optimism with kids at the age of 13. She says that at thirteen years old kids are mean, they face breaking out into the world, that it is incredibly stressful and things can and do spiral out of control, but it will get better with time. Natalia, despite her accounts on social media websites like Twitter and Instagram, does not have the best advice about social media. She does not believe social media is real life. She thinks while it can be good fun, it can get toxic very quickly, and she is right. She says your life and your friends and family are the only things that are truly real, and what other people think about you isn’t.

She reflects this in playing cool characters who play cool parts. She knows there is a lot of hatred in the world, so she wants to get her love out there. While she isn’t into horror, she is more into relationship stories and work that focuses on emotion.

While I had my doubts about last season of Breaking Bad, this one is shaping up to be undeniably fantastic. The first half of season three was mostly clean-up, and really, the rest of the…

I think that it’s a safe bet that through badass trailers, posters and word of mouth, everyone is already pumped for the return of Game of Thrones. I don’t think that decorated bike cabs at…

Remember a while back when I posted a picture of a redhead Firefly fan who looked like the daughter of Captain Mal Reynolds and his “wife” Saffron? Well I never did end up reading the…

Certain books just beg to be adapted to the screen.  Whether it’s a certain character that’s so vibrant that you can’t help but wonder how your favorite actor would bring them off the page, or…

Artist Missy Penny has brought us yet another batch of Game of Thrones art nouveau-style pieces, but ones with a particular theme in mind. She’s used four different ladies to illustrate the four seasons, and…

What’s in a name? Naming characters is, I think, one of the most difficult tasks faced by writers. You want the name to reflect their personality in some way. Can a name even do that?…