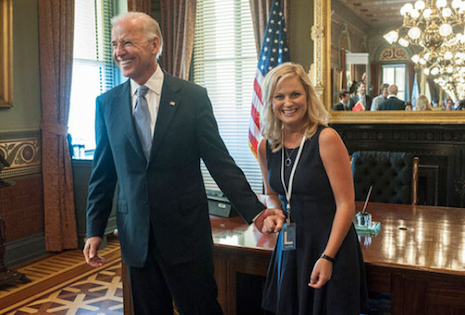 Sometimes I feel like I’m in a movie. Not because my life is overly dramatic or interesting or anything, but have you read the news lately? It’s like we’re unpaid extras in a James Bond movie. Seriously. Anyway, all of this got me thinking about politics and entertainment (and the thin line between them). And I decided to pull together 10 must-see political cameos in movies and TV. Take a look.

John McCain probably never imagined that his innocent cameo in Wedding Crashers was going to come back and bite him in the butt. Way back before he ran for president of the United States, Senator McCain shook hands with Christopher Walken during the post-ceremonial wedding scene of said movie. He was actually accompanied by the distinguishable James Carville, who’s also linked to politics (and you’ll see him two more times on this list BTW). Anyway, when McCain fired that celebrity ad at then-Senator Barack Obama, he got some flak for forgetting to acknowledge his own Hollywood credits.

Patrick Leahy in The Dark Knight

Democratic Vermont Senator Patrick Leahy is one lucky Batman fan. He got to be the one who stood up to The Joker during the famous “party crash” scene in The Dark Knight. And this cameo is just one of many. Mr. Leahy also appeared (and got to speak) in The Dark Knight Rises, Batman & Robin and even voiced a character in the animated Batman series from the early 1990s. And just in case you begin to hate on him because he gets to make cameos in all of these Batman-related movies, know this – all of the profits he makes from appearing in these projects go to the children’s wing of Kellogg-Hubbard Library.

Parks & Recreation is no stranger to political cameos. Even John McCain has appeared on the show. Recently, the Vice President of the United States, Joe Biden, got to fulfill one of Leslie Knope’s (Amy Poehler) life-long dreams. As many of you may know, Mr. Biden is Leslie’s political idol, and the only politician on her “celebrity sex list.” Well, Leslie finally got her wish, thanks to her fiancee Ben Wyatt (Adam Scott). During his cameo, the VP got to show off his pearly whites while Leslie hilariously stared deep into his soul.

James Carville has made quite a few cameos in both movies and television. Mad About You, Wedding Crashers, 30 Rock, The Muppets and The Assassination of Jesse James by the Coward Robert Ford are just a few titles on his “acting” resume. In Old School, he barely says a word, but I would just like to point out that if he were truly in a debate, he would definitely have a rebuttal. The guy’s a talker.

James Carville in The Assassination of Jesse James

Many found Carville’s cameo in The Assassination of Jesse James unnecessary and distracting, but I thought it was rather brilliant. The political consultant played Missouri’s governor, Thomas Theodore Crittenden, with authority and a hint of evil. At least for me, that was enough to make him believable and enjoyable.

Michael Bloomberg on Curb Your Enthusiasm

New York City Mayor Michael Bloomberg has had his fair share of cameos on TV and in movies. In one of his more funnier appearances, he defended Michael J. Fox and shamed Larry David (in public!) on HBO’s Curb Your Enthusiasm. During his brief speech, he kept his cool and monotone voice. He’s not really a good actor, but hey, this cameo beats the one where he called Dennis Duffy a hero.

While perusing Netflix the other day, I got a face-full of something I wasn’t expecting: Danny Trejo. I’d been completely unaware the man had starred in anything lately, but Netflix assured me that because I…

One of the longest running mysteries in TV history was one that might have gone unsolved forever. In the early ’90s, a group of kids got together to solve mysteries based on clues given to…

It’s not  often I post quotes instead of pictures or videos, but in this case, I had to. Stephen King is a famous author for a reason; he can put into words what we’re all…

I’m not sure what charity this was raising money for, but I’m sure their coffers are overflowing after possibly the single greatest fundraiser of ALL TIME. Sure, this was supposed to be a “Star Wars…

When thinking about the “weird” directors of the world you have to rank Terry Gilliam up there with the likes of a Stanley Kubrick or a Tim Burton.  Some guys just have a very strange…

KIX cereal is “Kid Tested. Mother Approved”. It makes me laugh every time. I don’t know why, but I hear the KIX slogan or see the box on the supermarket shelf and I start giggling…