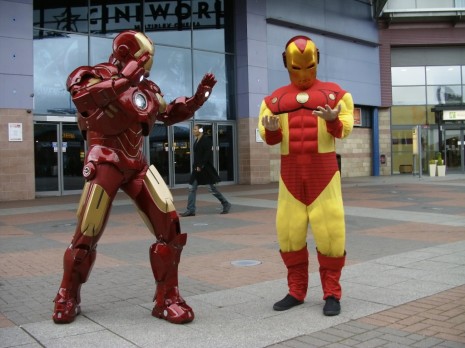 Another year, another time I don’t get to go to SDCC. Sigh. Someday damnit! Until my plans fell through I was trying to think what costume I might dress up in should I go. Then I decided that would be the worst idea ever, my reasoning best demonstrated by this picture. In short, people take this stuff SERIOUSLY. If you’ve been around my site at all the past few years, you’ve seen the lengths people go to craft accurate costumes for cons like these. And SDCC? It’s the biggest of all.

So while I might think it’d be cool to show up as a homemade Ezio for Assassin’s Creed (though how do I get all those blades on a plane?), I’d undoubtedly look like some douche in a bathrobe when pro cosplayer Ezio shows up in his authentic leather pauldrons made in Italy. I don’t want to end up on my own “cosplay fail” post, which I undoubtedly would.

I’m a little late (or early) for Father’s Day, but I’m pretty excited to have my dad visiting this week. We’ll be doing some Christmassy and possibly touristy things in London, but it’s each of…

David O. Russell is less a director these days and more of a machine designing movies specifically to win Oscars. It’s little wonder the man walked away from a Mark Wahlberg-led adaptation of the Uncharted…

Let me just start by saying, I was randomly Google searching images to lead in to this post, and I got this one. It is amazing. Moving on, a pretty funny part of a lot of recent…

Zack Snyder’s Batman vs. Superman Wonder Woman, Gal Gadot, is speaking out about the internet’s collective “WTF” reaction to her being cast in the role. The most vocal complaint was that she doesn’t have the…

I came across this picture and it struck me as being profoundly sad. For as much as I like downloading movies off the internet, or receiving them in the mail, there is something depressing about…

The best directors know that a key element to their job is being emotionally manipulative to their audience. To truly take an audience for a ride, in the short time they are with you, you…