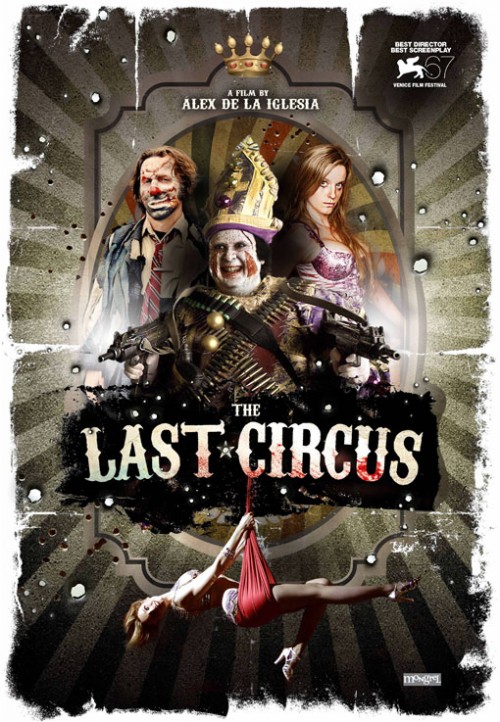 Guys, this is a pretty big deal to me. My first day of my new column, Why Haven’t You Seen It, on Unreality. Here, I will be focusing on one movie, once a week, that I feel is remarkable and more of you need to see. While I would have loved to write this column from the start, I did not pitch it to Paul until I atleast had earned the readers respect as “the guy who watches weird movies, but rarely steers us wrong”, and now that  (I hope) I have earned that from you all, I figured it would be a good time to start pitching you guys these movies, one by one.

I am starting this column off with The Last Circus because, of all the movies I have watched in the last year, this is the one that caught me most off guard. Is it a fable? is it a fantasy? Is it a romance? Is it gory? A black comedy? A cautionary tale? Is it oddly sentimental? Is it horror? Is it drama? Well, yes and no to all those things. What I can tell you it is, for sure, is f*cking remarkable, and unlike any movie you have ever seen. Also, fret not, I will not spoil anything, and will keep this all as vague and intriguingly cryptic as I can. I didn’t watch the film for you, I simply want to get you hungry enough to watch it on your own.

First off, the trailer so I can set the tone for what you see here:

I feel like I could stop the article now, and you would all be wise enough to see the movie already.

Now if I may, what did you take away from that? Nothing, right? Good. That is what you need for this film. First thing you need to know is that this film is visually stunning, and I cannot stress that enough. I mean, David Fincher and Stanley Kubrick levels of directorial money shots. From the opening scene (with a clown fighting soldiers with a machete, which is not a spoiler at all so don’t worry), you know you are in for something surreal and beautiful, and it is both of those things in spades.

So what is The Last Circus about? Well, to tell you without telling you, it a Spanish film about a man named Javier, who is a clown, but not the kind of clown you know. Javier is “the sad clown”, meaning he plays the clown who usually gets the shit end of the stick. You know, the one who gets the pie in the face and never seems to throw it? Yes, that is Javier. And we follow his tragic life, picking up mostly in the later years, as he gets a new job with a circus. At the circus he meets two other people who will change his life forever. One of those people is “the happy clown” to his sad clown, named Sergio. And then we have Sergio’s girl, Natalia. To tell you anymore would suck some of the joy out, but I am sure from the dynamic I just explained and the trailer we watched, you are already connecting the pieces. 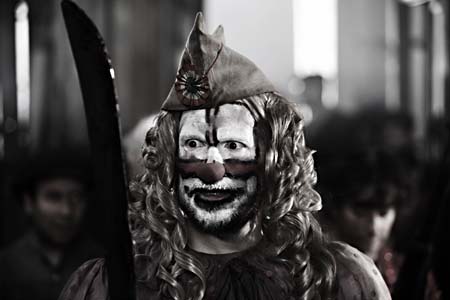 Dear this scene: Thank you for officially becoming my favorite battle scene, ever. Sincerely, Remy.

So the first thing we need to talk about regarding The Last Circus is the performances.

Three, actually. First off, we have Carlos Ereces as Javier, our lead and the “sad clown”. While he may look just like Judah Freidlander from 30 Rock, this character is one of the most nuanced performances you are likely to ever see from a man playing a clown. He exudes tragedy at all times, and even when he is happy, you can see him looking around, waiting for it to all tumble down on him. Again, I will not go any deeper down the rabbit hole with you than that, but rest assured, Javier is a character you are not likely to ever forget.

Also, huge props for him being willing to go “full nude” for great length, even though he has what literally may be the smallest penis ever. I know that sounds juvenile, but wait until you (don’t) see this thing. To go nude with a penis that small takes giant balls. Wait, I should rethink that whole sentence. 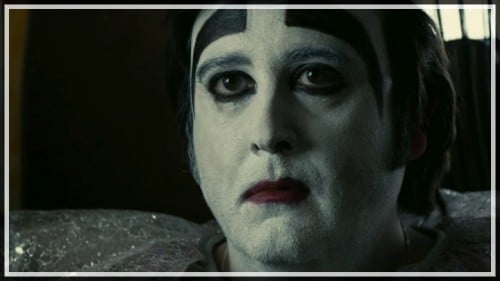 And trust me when I say he gets to play the true gamut of human emotion in this film.

Next up, we have Carolina Bang as the “love interest” in The Last Circus. Porn name aside, the whole point of her character is that she is bewitching, and can cast a spell on even the most emotionally frozen and closed down of men. She is another complex character who we never get full insight into, but we, as viewers, feel just as compelled by her as the men in the film. She is stunning in an almost “Golden Age of Hollywood” way, which I know was on purpose. She has these massive, expressive eyes, and these cherry red lips, and from the first minute you meet her, you know she has the power to turn the whole world upside down, which is ironic, because that is just how she spends a great deal of the film. 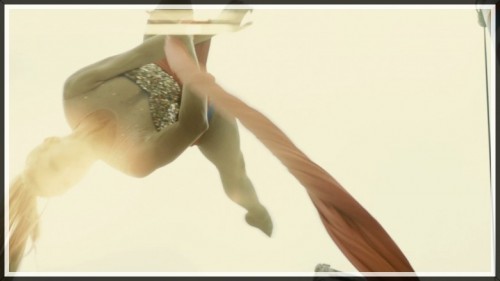 Get used to looking at her like this. Also, note the symbolism of the red silk she hangs with, all you Room 237 fanatics.

Last, and maybe the most surprising of all, is Antonio de la Torre, who plays the “bad guy”, Sergio. Note the quotations around “bad guy” there, because I did that for a reason. While he is one of the most loathsome characters I can recall from recent film (there WILL be times in this movie when you want to crawl into the screen and choke him out), isn’t that what makes bad guys in film work so well? Your mouth will fill with bile every time he speaks, and your toes will curl with hatred. But the beautiful thing is watching how the two leads evolve and devolve as people, as a result of the other. Don’t forget, Javier is the sad clown, and Sergio is the happy clown. This is essential in the enjoyment of this fable, which is, in turn, exactly what this is. An adult fable, way cooler than any of those watered down TV shows that think they are being gritty with the idea of modernizing and maturing fairy tales for adults. This film succeeds where all those shows and movie reboots fail. Why? Because this movie has heart, and even amid all the madness, chooses to wear that heart on its sleeve. 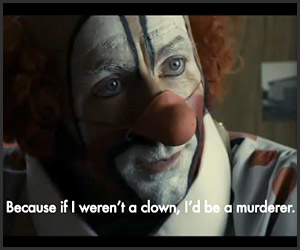 One of the best lines in any movie, ever. Really. And pretty much what we assume about all clowns, anyway.

I want to take the final moments here to shout out the amazing director of this opus, Alex de la Iglesia. Though I have not seen his other movies (Oxford Murders with Elijah Wood to name but one), he has just been included as a director in one of the segments for the ABC’s of Death 2, which I am beyond stoked about. I was also promised an opportunity to direct a letter myself, but sadly, things did not quite pan out (mark my words, though, I will be in that series somewhere down the road), but after seeing the stunning, bleak-but-beautiful story and world he crafted for us here, this guy is going to be unstoppable. 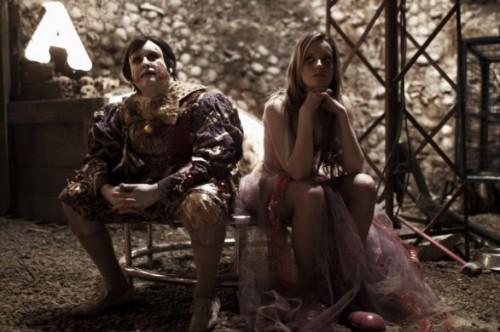 Every single shot in this film looks like it could be a perfect painting.

In closing, I place The Last Circus right next to Pan’s Labyrinth and The Thief of Always as the best adult fables ever conceived, and if those final moments don’t hit you in the feels, you aint got no feels. Oh and yes, as of right now, 6/28/13, it IS on Netflix instant. Hit me up on my Facebook page, too, and let me know what you think after seeing it.

And don’t forget, you can always find insane ramblings like this over here.…