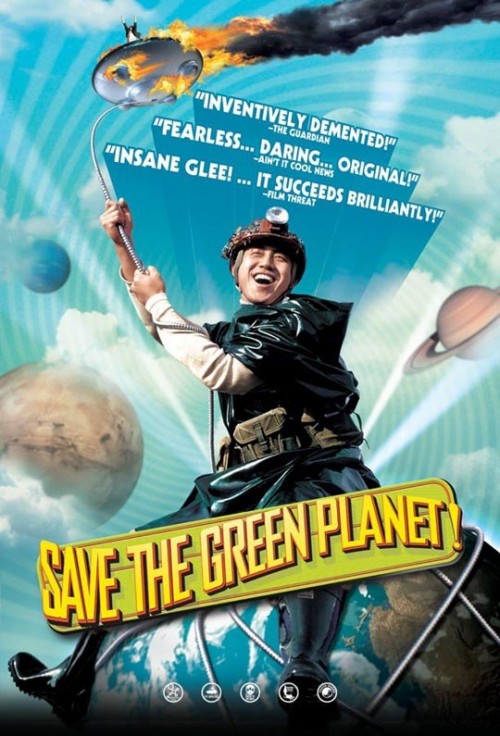 Truth be told, I think I have been playing it too safe with you kids so far on this column. Most of the films I have recommended, though sometimes weird and dark, have not been SO INSANE that some people walk away from it wounded, and I think I need to change that. Not necessarily make it so I am ruining any of you, but make it so I ensure that I recommend a film that, love it or hate it, you will DEFINITELY be talking about.  It is safe to say that Save The Green Planet is a movie that you will walk away from talking about. It is a movie that is SO out there at times, you won’t be able to tell what kind of movie you are watching. It makes jarring leaps between moments of extreme gore and moments of absolute campy hilarity, and this tonal change that occurs throughout the movie makes watching it a really insane, bumpy, and sometimes jarring ride, but like all the best rides, at the end, you WILL want to go again.

Regardless, it is quite unlike any other film I have written up before, and even if you walk away from it confounded, that doesn’t mean you shouldn’t see it. The BEST art always inspires conversation, even if not everyone agrees with it, and that is just what this film does. But again, to reiterate, this is a twisted ride, and maybe the most extreme movie I have recommended so far (outside of the brilliant Last Circus), so be prepared to wince between laughs. 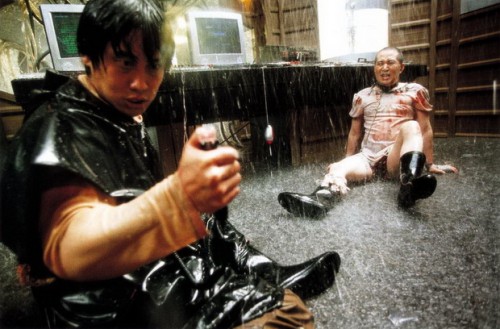 Oh no, he found the implants.

First of all, this is a South Korean movie. And if you kids know ANYTHING about me, you know I adore South Korean cinema. The tend to tackle taboos with reckless abandon, and the taboo they tackle in Save The Green Planet is aliens. Yes, aliens. But this is a South Korean movie, so if you are expecting Paul or Close Encounters, you will shaken like a baby by this film. It is an alien movie that defies explanation. The first half of the movie almost seems to be mocking the idea of people who believe in aliens, but there is a tone change, like I said, and it happens enough in this film that even the film wants you unsure of what side of the argument you fall on. This film is complicated, so I think it’s trailer time. The best part here is, the trailer will tell you the story in a far more concise manner than I could.

You have to admit, the punk rock version of Somewhere Over The Rainbow in the trailer makes it look like the coolest thing ever, and honestly, it just might be.

So the story for Save The Green Planet, for those who did not piece it together from the trailer is, there is a man named Beyong-gu who completely and utterly believes that aliens are about to attack and destroy planet Earth, and it is up to him and his circus performer girlfriend to stop them and save the day. What this entails is Beyong kidnapping a powerful executive he believes will make contact with the alien overlord during the forthcoming eclipse and then kick-start the apocalypse. He then keeps said executive in his basement, and begins torturing him to get the truth out of him. This may be when the movie loses you, but this is a BIG PART of the movie. As he gets deeper and deeper into the interrogation, we see that Beyong-gu may have brought this man here for different reasons entirely, and rather than trying to protect the Earth, he may just be some sick bastard who is out for revenge. Revenge for what, I will not ruin here, for it adds another element to the story. Remember, this is a South Korean movie, so you KNOW revenge is in there, somewhere. 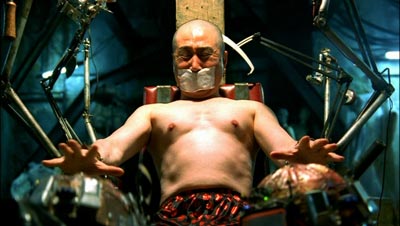 I have a very similar set up in my bathroom.

Ofcourse, I want to tell you about the lead in the film. An actor named Ha-kyun Shin. What is really amazing about his performance is he goes between rational and insane with the drop of a hat, and even us, as the viewing audience, will not be sure what we feel about him at all. That may sound counter productive with trying to like and follow a lead in a film, but you need to understand, like all South Korean films, the lines between who is good and who is bad often are paper thin, and switch many times during the course of these films. Save The Green Planet is no exception.  Like the trailer clearly states. This is not a comedy. This is not a horror movie. They are sure to tell you what it ISN’T, but they refuse to tell you what it is, and even YOU will have a hard time figuring that out. That, alone, is why I loved the film. Utterly captivating, yet it’s hard to put a finger on just why.

Again, I am being vague on purpose, hoping to heighten your interest, without revealing too much about what makes this movie so unforgettable.  There are scenes in this movie that will stay with you for a long time, and that is not a bad thing. Just the scene of the guy shooting attacking bees out of the sky, one at a time, is insanely hilarious and seems like it would be a scene in Mel Brooks movie, yet, here it is, in the middle of this insane mutt of a film, and it works just as effectively as it would anywhere else. 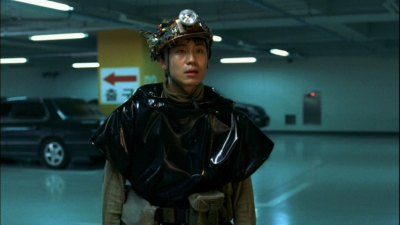 If I went to church, this is what I would wear.

But the one thing I need to tell you, over and over, right now before I go on my way is, this movie is NOT what you think it is. Understand, there are tone changes MANY times in this film, and it is a ride that pulls you in about five different directions at once, but you need to trust me when I say, the ending will not leave you unsatisfied. It will only further reach into your mind and fuck it, which the best movies often do.

So lube up your brain and hang some plastic wrap on the wall behind your head, because Save The Green Planet will blow your fucking mind. Also, please go read about sexy sexual sensual silly and sick sex scenes over at my site. It will make you tingly in your bathing suit area.