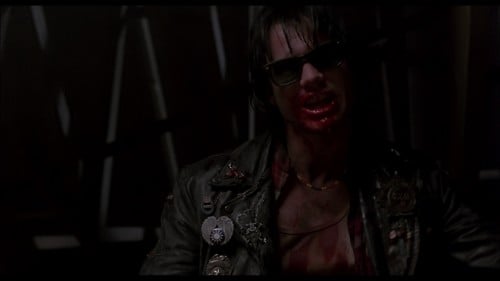 There was a time, not so long ago, when the legends and stories of vampires where steeped in blood, death, and fear. A time when even mentioning the word vampire would send a chill down someone’s spine. There was a time when vampires were represented like badasses. Feral badasses who function on a primal level, where they only seem like they need to feed or they need to screw. But then a film series came along and changed the way people looked at vampires. Gone was anything that made them cool and scary, replaced by a femininity and sensitivity that would even seem out of place in a fourteen year old girl. While I refuse to mention the film series out of spite, I think we all know what movies I am talking about.

Well, today, I want to talk about one of the best vampire movies ever made. A film that represented vampires as such scary badasses, it is how I imagined all vampires forevermore, after I saw the film. I am speaking of the classic, Near Dark. a damn near perfect vampire film, if there is such a thing.

Before I start “gushing” about Near Dark (lame wordplay, anyone?), let me offer you some movie advice right now. See the vampire flick Only Lovers Left Alive, starring Tom Hiddelston and Tilda Swinton, out right now (and on V.O.D I believe). I talk about that stellar film in depth over here, and just wanted to make sure I started this off by telling you that Only Lovers Left Alive is about the coolest vampires I have seen on film since Near Dark. It was the movie that inspired me to write this week’s column about Near Dark, as a matter of fact. Afflicted is pretty good, too. Ah, it is nice to be falling back in love with this wonderful genre. Alas, I am getting side-tracked. 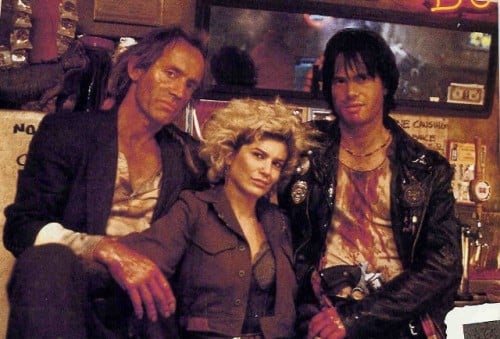 The first thing I want (natch, NEED) to say is Near Dark is written and directed by Katheryn Bigelow. Yes, the same brilliant mind behind The Hurt Locker, Zero Dark Thirty, Point Break, and many other notable films. Honestly, she might have made the coolest vampire movie ever here, just outside of Lost Boys. Sorry, I got lots of fanboy love for Lost Boys. But Near Dark was the first time I watched a vampire film and said. yup, that is how it would be. Okay, enough fan babble from me, let’s jump into trailer town:

The movie that makes being a vampire look far less glamorous than most.

Before you note the similarities (at least visually) to The Lost Boys, please know, they came out the same year, 1987, and somehow Lost Boys got the more attention. This is no insult to Lost Boys, as it is also a vampire film I love. 1987 was a damn good year to be a punk vampire, I guess. But I would say Near Dark deserves its accolades, big time. Alright, all caught up and done getting side tracked. Lets tear into some meat, shall we?

Near Dark is a movie about a young man named Caleb who seemingly gets mixed up with a family of vampires, and slowly gets pulled into their (insane) lifestyle. You have heard the story before. Young man in some dead end town meets a pretty girl who ends up biting him and turning him into a vampire. That, in itself, may have been done before. But it is how they set up the family dynamic that sets this film apart. This is not some group of vampires just messing shit up. This is a group who forms a wayward family and survives by living like nomads and not ever being found out, as they move from place to place, killing and feeding off who they must to survive. The family finds out that Mae (the chick who bit Caleb at the beginning) has also turned him into a vampire. Though this enrages the leader of the group, Jesse (played with ferocious intensity by Lance Henriksen), he allows Caleb to join the “family” for a week to see if he can hunt and survive with them. 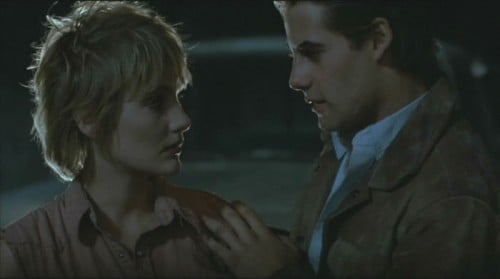 Don’t worry. In a pre-Twilight world, vampire love stories were kind of twisted and still kind of cool.

I think another crucial thing that makes Near Dark work perfectly besides the scary performances, awesome outfits, and great acting, is the setting. The more I get into film, the more and more settings have an impact on me. Had this film taken place in some bustling city, it would have felt cliche’. Instead, it all takes place in long, dusty stretches of the Midwest. A place that feels haunted and empty even before the vampires show up. That lends a feel of isolation and hopelessness to the whole film. Like each road will just go on and on for miles, with nothing in between. You can almost understand why Caleb both wants and doesn’t want this new life. But the real draw here is “the family”. Though I could point out many performances in the film, it is Lance Henriksen and, believe it or not, Bill Paxton (both who had starred in her then husband, James Cameron’s Aliens, one year before Near Dark), that make this movie work as wonderfully as it does. Here, let me show you one scene, one of my favorite scenes in any horror film, and the best use of boot spur I have ever seen on film:

I will admit. I have wanted to do this to a bar full of red necks for a long time.

That is EXACTLY what vampires should be. They should make you feel as if you know you are doomed the moment you see them, no matter what you say or do. There should also be a certain ambiguity to them. There are times when you think “are these vampires or just extremely insane and dangerous people?” That is what makes the vampire so appealing. It is very much a civil man who can turn into an beast without warning. I honestly look at that bar scene as one of the greatest scenes in horror. The growing sense of dread. The palpable insanity to Paxton. It all just works so well, and confirms why I think Near Dark is a f*&^ing masterpiece.

Because it reminds us why we love vampires in the first place. These are not sparkly teens who can seduce us by acting like pansies. These are not designer clothes wearing poet laureates who speak from the shadows and and make us weak in the knees. No, these are humans who were cursed with a need to drink blood, and will meet that need by any means necessary. Near Dark pulls away any of the romantic layer and shows us that, believe it or not, living like vampires would totally suck. Ah, to end an article with the worst of all wordplay would scare a lesser man away.

Anyway, see Near Dark, and thank me later. 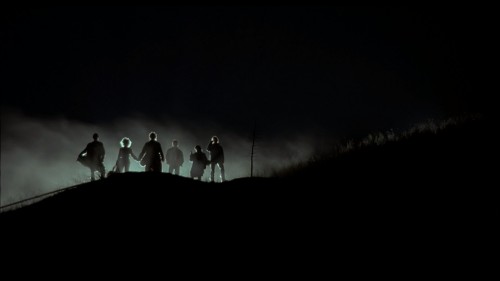 Yes, this shot is also pretty much in The Lost Boys. Like I said, 1987 was a great year for vampires.

Hey kids, if you like this drivel I drop out of my brain onto the page, you would probably LOVE it over here, and if you do, come here and spank that “like” button for me. It would be appreciated. 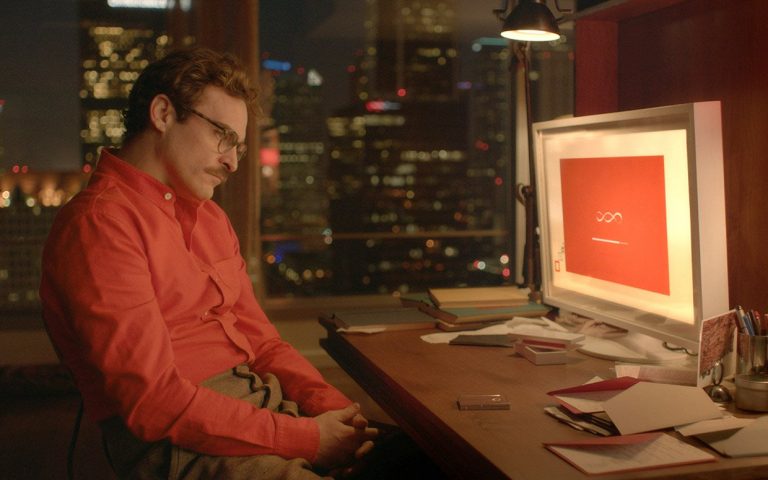 (art via Carly Hwang) I’m posting this gallery for two reasons. One, because it’s a badass collection of “finger art” using Drawing Something that covers many of our favorite topics here on Unreality. Second, because…

1.5 out of 5 stars Terminator 2, in my estimation, is one of the best movie sequels ever made. It’s a remnant of a time when sequels weren’t an expected necessity, but a real challenge…

I’ve featured more Disney princess art than I can count over the past few months (and years) but rarely do we ever get to see the ladies in real life. Above and below you’ll find…

Horror can be enjoyable in smaller doses, which is why I’ve often felt that when done right, music videos are a wonderful place to explore the genre. Yet it seems so few artists choose to touch…