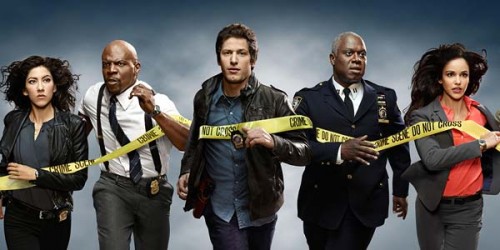 Every year, we get a flood of new shows dumped on us, and it usually takes a few weeks to sort through which ones are and aren’t worthwhile. Some appear immediately appealing right off the bat and have me watching from episode one (Almost Human, most recently). Others? I’m going to need a bit of convincing.

And people just can’t stop talking about Brooklyn Nine-Nine, it seems, and the comedy is already getting nominated for awards in its first season. Yesterday, I sat down and watched all eleven episodes, and can now report my findings as my brain thaws out from comedy overload.

Generally speaking, it’s a really, really bad idea to watch eleven episodes of anything in a row, much less a comedy. Even something that’s hilarious to start with can become boring and mundane by the end, which is a problem I’ve run into catching up with past season of even shows I love like Archer and Always Sunny.

That said, while Brooklyn Nine-Nine never had me on the floor laughing, I had a consistent smile plastered on my face throughout, and the last episode was equally as enjoyable as the first. 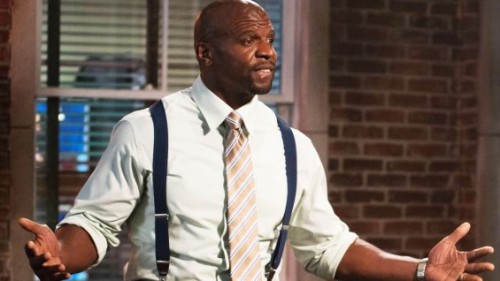 It’s the comedy cop show we need in this age of way too many hour-long police dramas. That niche used to be filled by the wacky Reno 911, but that show is gone, and even when it was airing, it might have been a bit too oddball for some. Brooklyn Nine-Nine is accessible, and more importantly, has quickly built up one of the best casts of characters across any comedy on TV right now.

It’s an interesting notion, to see a comedy work  because of its characters, not just its jokes. While famous, popular comedies like Modern Family and Arrested Development have some really memorable characters, they mostly rely on their joke telling. Funny callbacks, inside jokes, quotable one-liners, or surprisingly complicated plots that when they come together, it’s both brilliant and hilarious.

But Brooklyn Nine-Nine is more like its sister Fox show, New Girl. Both of them have good jokes and decent plots sure, but it’s the characters themselves that are the reason the show is funny. Nick, Schmidt, Jess and even Winston now are amazing characters, and the same is true for most of the cops of Nine-Nine, even in a short amount of time. 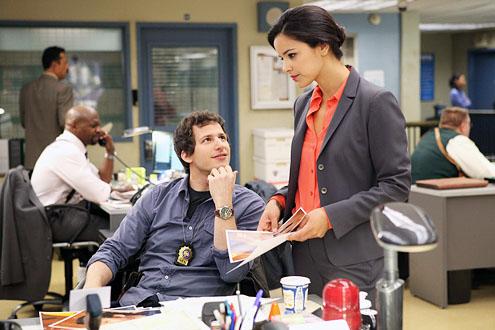 Andy Samberg is the lead, yet even as funny as he is, he’s only probably the fourth funniest person on the show. Ahead of him are his stonefaced captain, played by Andre Braugher, his buff but timid sergeant, played by Terry Crews, and his oddball office BFF, played by Joe La Truglio. The girls are funny too, potential Samberg love interest and straightlaced cop Melissa Fumero, and the unsmiling, tough talking Stephanie Beatriz, forever pursued by La Truglio. The only miscast member is the forever annoying office assistant played by Chelsea Peretti, but I suppose being hateable is her role.

Samberg is Jake Peralta, a surprisingly good detective whose greatest flaw is never growing up. He spars with his new captain, Braugher’s Holt, but both he and Fumero’s Detective Santiago are forever trying to win his approval.

I love how even though yes, the show did cast a white male lead, they’ve filled out the cast with two black actors and two Latina women. Usually one of each would be enough for any show trying to hit a quota, but Nine Nine has picked these actors simply because they’re hilarious and right for their parts. Similarly, Braugher’s statuesque Holt is a happily married gay man, yet outside of rare occasions, there’s simply no fuss made about it. Again, not something you usually see. 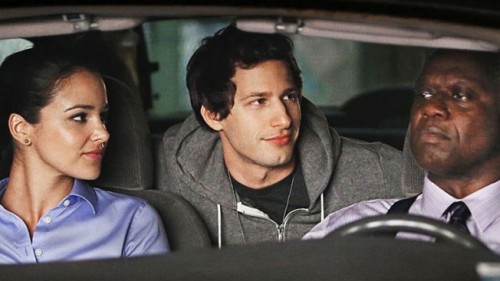 As I said before, the cases themselves are never usually all that engaging, so story and plot structure really isn’t the highlight here. Even when the show does try to be clever (during an episode where Peralta executes a master plan to steal Holt’s medal of honor from his office to prove a point), it’s not as brilliant as it thinks it is.

Rather, the joy of the show comes from simply watching the characters interact with each other. It’s like on New Girl, where you can just have all four main characters bantering on a couch for twenty minutes and it’s a perfectly hilarious episode. New Girl and Nine-Nine actually remind me of Friends, a show that had mediocre day-to-day plots, but a hysterical cast of memorable characters we all grew to love. Some shows can have it all, like Seinfeld with its iconic characters AND brilliant plots, but such treasures are rare in the genre.

Brooklyn Nine-Nine is a solid comedy that’s neither a laugh track sitcom nor a “talk to the camera” Office/Modern Family clone. It makes light of a genre I’d normally hate, and its memorable cast makes every episode worthwhile. I’m looking forward to seeing more in 2014.