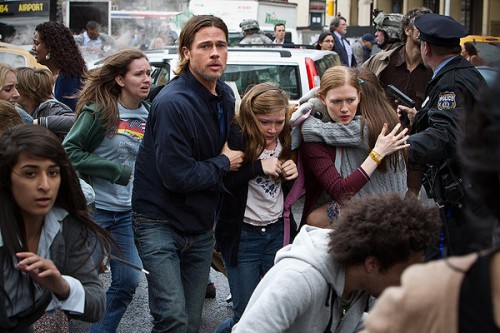 It was shaping up to be this year’s Battleship or John Carter. Massively expensive and diving into an oversaturated blockbuster market, World War Z was marketed terribly, said to be shaming the brilliant source material and had an ending so bad they had to rewrite the whole thing.

But you know what? It’s actually pretty good.

Whether not being a terrible film will save it from losing money is another question, but World War Z and star/producer Brad Pitt have actually managed to craft a decent apocalypse flick, even in a genre that’s growing a bit tiresome.

Ahead of the movie, I picked up Max Brooks’ original book as I’d been hearing great things about it for ages. My late adoption got me an unfortunate movie-poster based cover, but more importantly I found that it’s one of the best books I’ve read in years. 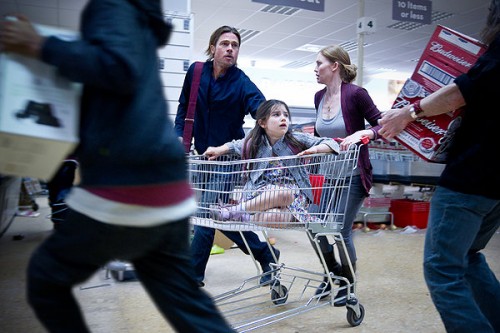 “GOD DAMN THIS IS ONE HELL OF A SALE!”

That will be the primary complaint of those who read the book and come watch a movie that carries over perhaps 5% of the original source material, but my advice to that crowd is to simply move past it. World War Z, the novel, is a retrospective of the zombie war, telling a few dozen people’s stories as they pertain to the economic, military, sociological and biological aspects of the zombie plague. It’s a format that’s just not meant to be translated into film, nor does it need to be.

Rather, World War Z the film shares the book’s title and the central concept of a worldwide zombie end times scenario. You could say Brad Pitt is sort of the equivalent of the narrator, hoping around from place to place, but it’s not really the same.

Here, Pitt is Gerry, an ex-UN investigator called into action to try and hunt down the source of the zombie disease once the world is in flames. He hides his wife (Mireille Enos) on a floating military armada near Bermuda, then proceeds to jet around the world attempting to find the origin of the plague, a cure or simply something to turn the tide of the war.

The zombies he faces are a weird mix of a variety of kinds we see across pop culture. Unlike the book’s slow flesh-eaters, here, the zombies are almost superhumanly fast and agile, and seem content to bite their victims and move on rather than literally have them for lunch. When not provoked, they stand around twitching and screaming like de-mushroomed versions of the infected from The Last of Us. 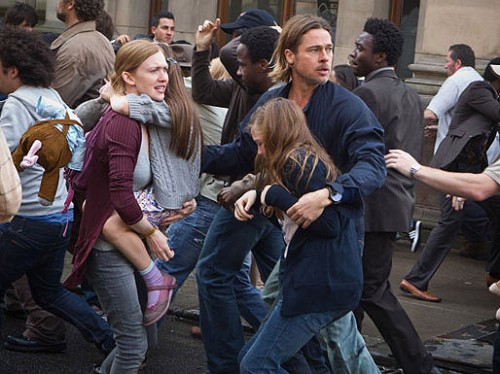 Sorry Mireille Enos, The Killing has programmed me to dislike you.

I was ready to start complaining about the concept of a PG-13 zombie movie which does seem a little inherently ridiculous. The zombies have simply colored contacts instead of rotting flesh, and when they kill or are killed there’s very little blood at all, and the film constantly cuts away from skewerings or stabbings, a true rarity in the genre.

But honestly, I’ve been drowning in the gore of zombie movies for so many years now, it really didn’t bother me all that much. 16 weeks out of the year I get to watch the cast members of The Walking Dead dismember zombies in every way imaginable, so really I’ve had my fill of brutality in the genre. Normally, yes, it’s sort of required, but honestly, I didn’t miss it all that much here, and I’m not sure how much it would have added.

Rather, we have a zombie film that is much larger in scope than any other’s we’ve seen before it. Gerry travels to an infested South Korean airbase, the now fully walled off nation of Israel and some WHO facility in northern Europe, giving the movie a sense of scale that’s been missing from the genre. 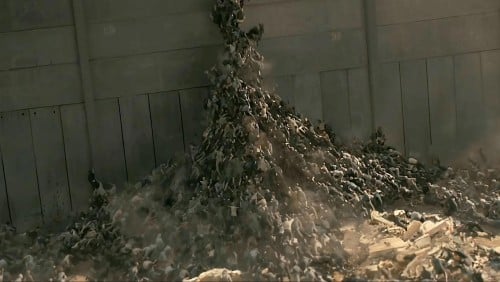 Less goofy and more terrifying than the trailer suggested.

Even though I suggest that fans of the book let go of their love for it while watching, it is hard to do so. There were so many sequences I remembered from the novel that I wished I could see brought to life, but it simply wasn’t doable in the format they adopted. But still, a World War Z film without the famous Battle of Yonkers does seem like something of a waste.

For all the complaints of a terrible ending that needed last minute rewrites and reshoots, I rather did like what they came up with in the end. It’s a bit predictable sure, but it’s incredibly well executed and thrilling to watch play out onscreen. The same can really be said for most of the movie, as there are some truly astonishing action set pieces here between the walls of Jerusalem and the infestation of a flight mid-air. They action is so good, I didn’t even mind the presence of mostly CGI, altogether bloodless zombies.

This is a pretty damn good zombie film, and really, not bad compared to most other end of the world fare we’ve seen onscreen. It’s not amazing, but it’s infinitely better than it initially looked, and it might be worth your time if you were considering skipping it before.