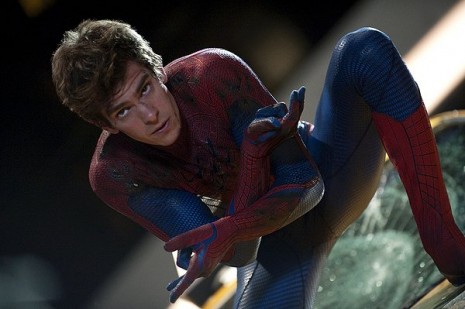 “With great power comes great responsibility. ” It’s the most memorable line from 2002’s Spider-Man, and a thought that can shed some light on the central mystery of the new film. Why exactly would you reboot a series that just concluded a mere five years ago? Even for remake-happy Hollywood, it seems a bit excessive.

The answer is that Sony has the power of the Spider-Man license, and has deemed that it is in fact a responsibility to crank out more Spider-Man films until they’re forced to give it up, and hope the updated series is a box office hit.

It’s a fair gamble, as it’s been proven time and again that household name superheroes make for big bucks in sales, and so long as you put someone somewhat competent at the helm, it’s hard to screw up a good old fashioned origin story. 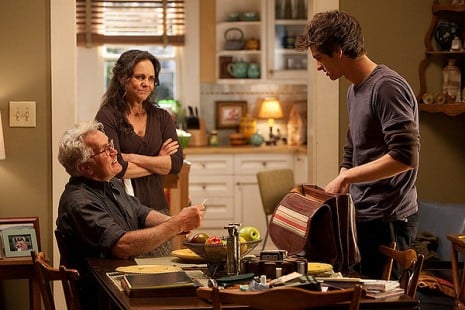 “Nope, no secrets about your father in there.”

Replacing Sam Raimi in the director’s chair is Marc Webb (I’ll pass on the joke) who was responsible for the rather fabulous 500 Days of Summer that was my favorite film of that year. Rather than enlist old friend (the too old) Joseph Gordon-Levitt for the Parker role, he mercifully snagged another up and comer, Andrew Garfield, most commonly known as the guy who got shafted in the Facebook movie, and the only actor who remotely resembles yours truly. Seriously, if you stretched me out four more inches, he’s me.

The Amazing Spider-Man is not a remake, as we have different players and villains making it an official “reboot.” Mary Jane Watson is replaced by Gwen Stacy, ironically played by notorious redhead Emma Stone gone platinum blonde. Norman Osbourne is a mere specter, and one of his employees, Dr. Curt Connors (Rhys Ifans) has the villainous lead this time around.

It’s an origin story we’ve heard a dozen times, and seen unfold on a handful of occasions between TV shows and films. Parker is a nerdy lad with dead parents and an insatiable interest in science. It leads him to get bitten by a radioactive spider (in this film, the creature was created by his father’s research), and it grants him spider-like abilities that include heightened strength, agility and the ability to see danger before it happens. 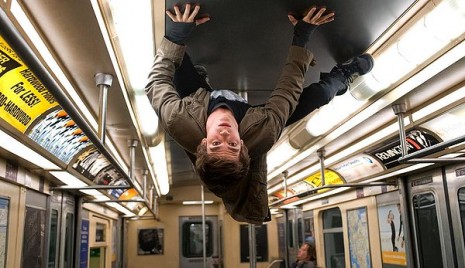 Oh, and being sticky.

Comic book devotees will be happy to know that unlike in the previous three films, Parker makes his own web rather than having it sprout naturally from his wrists. It may stay true to the comics, but it doesn’t really come up at all during the film, save for one final scene in which he could really use a few more feet of string at his disposal.

Past the origin story we’ve seen, this film brings in Connors as Parker’s father’s former research partner as Oscorp. The scientist is missing an arm, and in an effort to regrow it using a serum of reptile DNA, transforms himself into a wolfman of sorts, although one with scales instead of fur. The Lizard, he’s called soon enough as he rampages through town, and the newly born Spider-Man must stop him at all costs.

The Lizard is woven into the story smoothly enough, and the mirror to how Parker got his own animal inspired powers is a cool link. That said, the character design on the creature is…troubling. The CGI is fine for battle sequences, but the Lizard’s face is so bizarre it’s distracting. He’s like a cross between a cast reject from Disney’s Dinosaurs and a live-action Goomba from the abominable Super Mario movie. The villain hits the right notes most of the time, but when his face is shown, it’s hard to stifle your laughter.

Gwen Stacy subbing in for Mary Jane does little to change the love story we’ve seen in these films. It’s almost annoying how much she’s forced into the plot in an effort to make SURE she’s relevant. She’s “lead intern” at Oscorp who apparently has access to every file and top secret machine despite being in high school. And her father is a police captain (Dennis Leary, who would have been better served in Raimi’s universe) who is determined to hunt Spidey down for “vigilantism.”

It’s sad that director Webb can’t orchestrate as charming a romance here as he did in 500 Days of Summer. I can’t remember a superhero film that had a truly terrific love story to go along with it, and here, Stacy is just falling all over Parker while Parker falls all over her. The resulting conversations aren’t banal, they’re practically non-existent as the two rarely form complete sentences around each other. 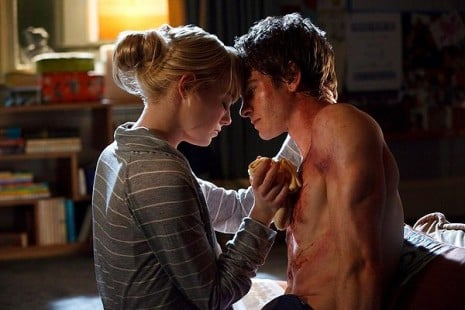 I know I always want to make out when mortally wounded. Though it is Emma Stone. I probably would.

I have mixed feelings about Andrew Garfield’s performance here. He’s a more troubled version of Parker than we’ve ever seen, but almost annoyingly so. His mood swings are massive, but most of the time he’s busy being so shy and bumbling that if the two of you were in an empty room, you probably wouldn’t notice him. Only briefly does he really mouth off as Spider-Man the way he’s supposed to, but it’s so jarring compared to his usual demeanor it feels almost schizophrenic. Though I suppose we are talking about someone who uses dual identities to fight crime.

There are some very cool moments, both action-wise (Spidey using his powers to spin elaborate webs like an actual spider is fantastic) and dramatically (Martin Sheen is one hell of a likable Uncle Ben), but the overwhelmingly dark tone doesn’t quite feel right here. Raimi’s first two films (we’ll forget about the the third forever) were bright and fun, which suited the hero. Here, with character death upon character death and endless amounts of brooding and angst, it’s not as enjoyable as the first.

It’s hard to live up to a series that produced some of the best films of the superhero genre. Though The Amazing Spider-Man has its moments, it doesn’t prove it needed to exist, or that it can do much of anything better than the initial origin story. 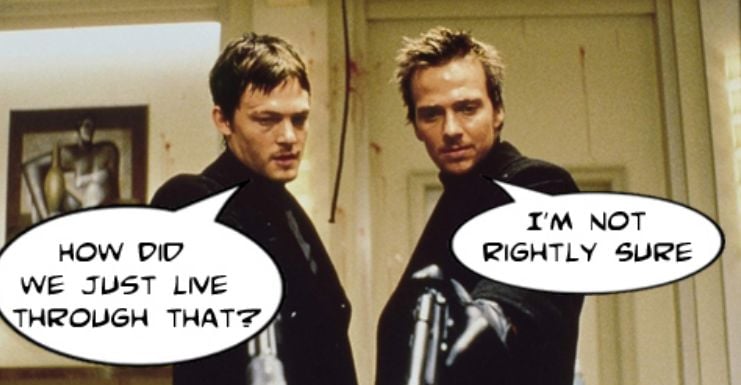