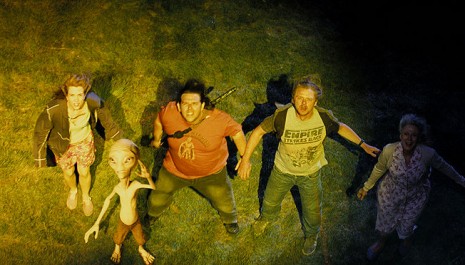 If you pitched me a movie that had Seth Rogen voicing a CGI alien, I would figure you were talking about some new ill-conceived Dreamworks Animation property. I would not suspect that it would be in a movie from one of my favorite comedy teams, Simon Pegg and Nick Frost.

Their previous two films together, Shaun of the Dead and Hot Fuzz are a pair of the best comedies out there. Their UK show Spaced is equally brilliant. But it wasn’t until Paul I realized how important a  third piece of the puzzle is to their success.

That would be director Edgar Wright, who has joined them on all of those projects, and recently departed from them for the highly stylized Scott Pilgrim vs. the World. His absence is unfortunately notable from Paul, where he’s replaced by Superbad‘s Greg Mottola, and I didn’t quite realize how important his quick cut and snappy directing and editing style was to the kind of comedy Pegg and Frost put out. 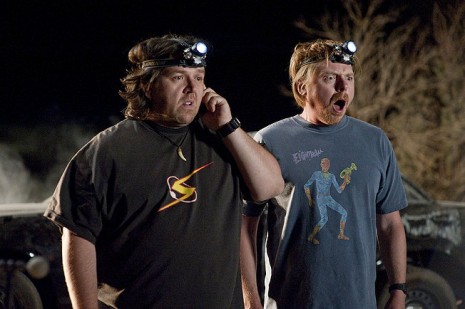 Humorous, but out of their element.

Don’t get me wrong, they’re still funny. Two sci-fi nerds who come across an alien during a cross-country trip of UFO landmarks is a decent concept for a film. But the entire affair is very, very different from anything we’ve seen from the duo previously. The structure follows a somewhat generic road trip movie formula, with on the road scenes spliced with various calamitous events that happen along the way. It just so happens that there’s a foul-mouthed alien along with them.

The central joke in the film is apparently that Paul, despite being an alien, talks and acts like Seth Rogen. Or at least how I imagine Seth Rogen talks and acts in real life. It’s not really his individual lines that are funny most of the time, I think it’s just supposed to be that there’s an alien saying “Fuck off” or mooning out a window that’s meant to draw the biggest laughs.

The cast is also kind of a problem. Pegg and Frost work best as a two man show, but there are so many characters tacked on here, that they’re overshadowed. There’s Jason Bateman, the agent tasked to hunt them down, there’s Kristen Wiig, a cycloptic fundamentalist, and more and more keep showing up. Jeffrey Tambor, Jane Lynch, David Koechner, Jesse Plemons, Bill Hader. The first twenty minutes of the film is like playing spot the celebrity, and the narrative gets lost. 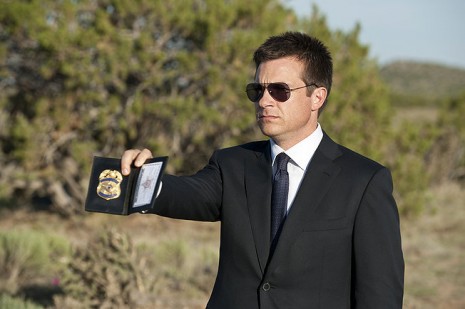 I thought it would be hard to buy Bateman as a baddie, but he did a good job.

Pegg and Frost share almost all their screen time with Seth Rogen’s Paul who overwhelms them both.  In an effort to mix things up, Frost plays the straightman here, while Pegg plays the goofball, but neither one is quite as good at the other’s part, and so most times they end up just kind of evening out.

Wiig’s character, along with her father, are fundamentalist Christians who have their faith challenged by Paul’s existence. They’re portrayed as such a brain-dead, nonsense shouting stereotypes, if they were any other race or religion there would probably be actual uproar over it. I’m not saying that I don’t agree with the idea that people who believe the earth is 4,000 years old don’t deserve to have fun poked at them, but it’s not done subtly in the least bit here, and I bet it will alienate (no pun intended) a few members of the audience.

The recurring jokes in the film just seems a bit juvenile for Pegg and Frost’s usual fare. A comic book character is noted to have three awesome tits. Wiig after losing her faith attempts to start swearing in an ineffective manner. It’s alright, but it’s far from the tight scripted comedy I’m used to from these guys. They whole thing seems very lowbrow.

Paul is funny in parts, but it’s just not up to the usual standard of comedy I’ve come to expect from this dynamic duo. I think it’s largely because that duo is supposed to be a trio, and absent Wright, Pegg and Frost’s comedy just isn’t quite as effective, and what could have been a hilarious ascent to the heavens kind of just crashes down to earth. 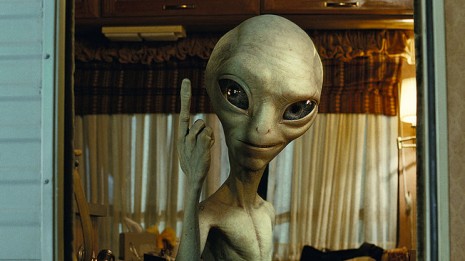 HA HA HA, AN ALIEN IS GIVING THE FINGER! 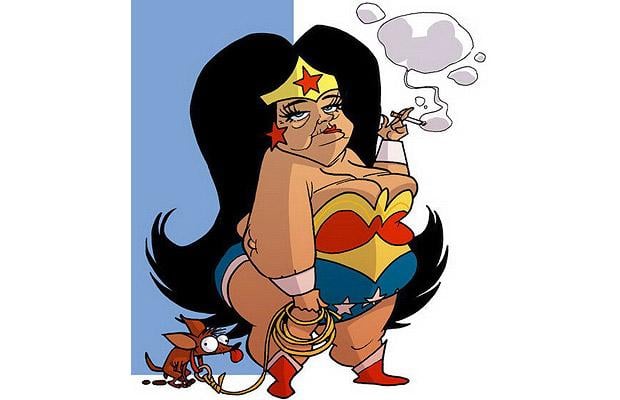 Since superheroes are well, super, you don’t necessarily think of them losing any of their powers.  And you most certainly don’t think of them as older people.  Are they even people?  I guess that’s a…

It’s been awhile since I’ve written a review as part of our “Movie Vault” category, but Perfume: The Story of a Murderer was such an unexpected, unusual experience that I felt obliged.  I don’t recall…

Two icons, both extremely badass in black armored costumes with intimidating masks and mad fighting skills. How the hell has no one thought to combine Darth Vader and Batman before? Thankfully the first person to do so…

httpv://www.youtube.com/watch?v=_Del6viNWSk I couldn’t quite believe my eyes when I first saw this video today. A bunch of kids recreating Scarface for a school play subbing in “fudge” for “f*ck” and popcorn for cocaine? This was…

Hitokirivader had a rather cool idea to show the evolution of the live action costumes of the most iconic DC comics characters over the years. Both Batman and Superman have appeared onscreen for over half…

httpv://youtu.be/gPVzv6m1u-o Perhaps I’m the only one who has experienced this, but when I saw the trailer for Looper the first time, I thought “wow, that guy looks a lot like Joseph Gordon-Levitt.” Then I thought,…