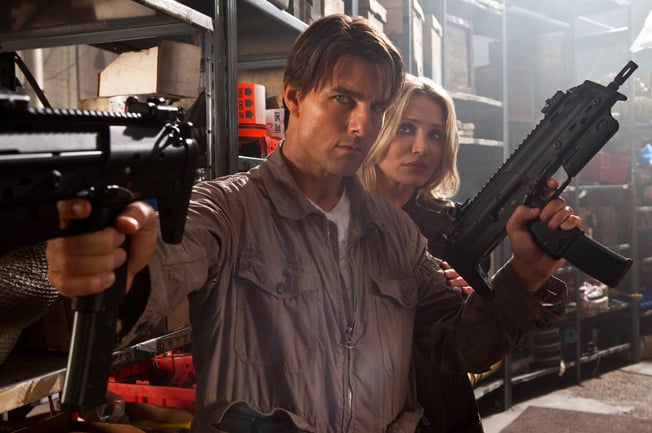 It’s been a long time since I’ve seen a movie as completely nonsensical as Knight and Day. Given its cast and director, it should have been a stylish and memorable action comedy, but given its script, it’s like someone won a contest where they wrote into 20th Century Fox and their script was randomly selected to be made into a movie by A-listers.

And judging by the fact that the film is written by Patrick O’Neill, who has no previous writing credits and whose last brush with Hollywood appears to be a turn as Waiter #1 in Senseless in 1998, I think that actually might be the case. So what was his grand prize winning pitch?

Roy Miller is a super secret spy being hunted by the government for being too awesome. June Havens is a simple small town girl who likes to fix old cars while looking like a supermodel. The pair’s paths cross and June is caught up in Roy’s tale of espionage, which has to do with him stealing a piece of secret government technology, and being hunted by the CIA, FBI and arms dealers for it. But he’s been framed! Or maybe not! Who knows? Stop asking questions and let’s jump off this freeway overpass!

This movie just doesn’t make sense. The plot is in shambles, purposefully creating so many twists and turns that by the end we don’t even care what happens anymore, we just want everyone on the screen to die, heroes included. 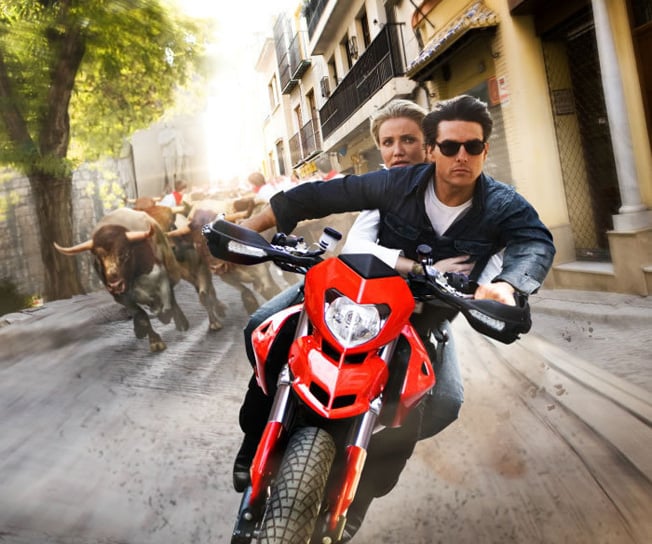 Death by CGI bulls. Sure, why not?

No, this film does not have likable leads, which is especially unfortunate considering they are played by exceptionably likable actors. Say what you will about Tom Cruise’s relationship with space aliens, but the man has had some iconic characters over the years, but here he’s merely playing a hybrid of two of his best ones, Jerry Maguire and Mission Impossible’s Ethan Hunt. It is not a good combo, as “Roy Miller” is a grinning buffoon whose actions have no real rhyme or reason to them.

And poor Cameron Diaz. I do like the woman, but here she is an affront to all things feminist, and her part could have been filled by anyone with pretty blue eyes and the lungs to be able to yell for two hours. June spends the first two thirds of the film alternating between screaming while waving her hands around and being drugged or knocked unconscious by Roy so that she stops screaming and waving her hands around.

The last third of the film has her falling madly for him, presumably due to a nasty case of Stockholm Syndrome, and at one point, she sneaks out of her secure hotel room in a city crawling with people trying to kill her, in order to trail Roy because she overheard him talking to another female on the phone. The nerve! The government and a cartel of gun runners are trying to murder you, and you’re more interested in stalking your goddamn secret agent crush who has almost gotten you killed on numerous occasions? A film about feminine empowerment this is not. 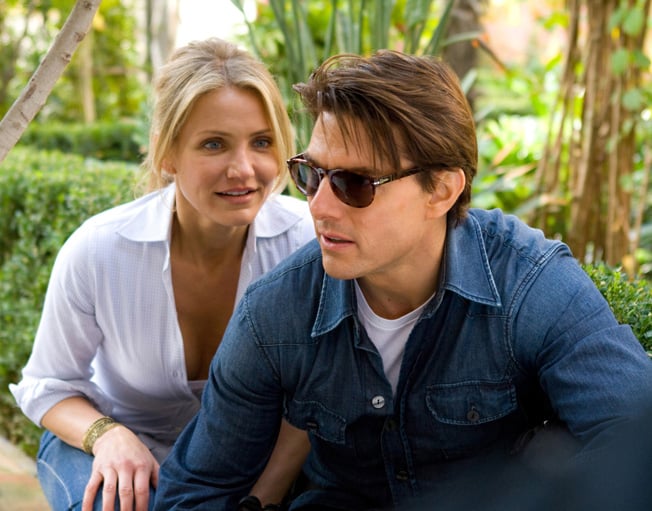 The worst part of all of this is that the June character, despite being the lead, is a completely unnecessary part of the film. There is just no reason for her to exist. Roy uses her to smuggle his stolen piece of tech onto an airplane (perplexing, since they both go through the exact same security screening), but then after Cruise kills everyone onboard her plane and blows it up, he could have just left her as she would have nothing more to say than simply “he’s some crazy guy I just met, I have no idea what’s going on” which is completely true, and verified immediately by the CIA. Roy drags her along for the ride anyway and unfortunately that scenario is what created this movie.

You’ll keep waiting for some explanation as to how her character is secretly tied into the central plot somehow, but that day never comes, and it becomes apparent Roy just keeps her around so he has someone to smile at as he caps innocent federal agents who probably have wives and familes.

Roy’s propensity to murder government agents makes sense if it turns out that Roy is really the bad guy. But if that’s the case, the explanation for why he keeps June alive goes out the window. Contrastingly, if he is the American hero he claims to be, he’s just murdered a hell of a lot of people in cold blood, even if he is being set up for something else. I won’t tell you which result is true, but as you can see, either outcome results in the plot turning into complete nonsense.

The film doesn’t even work as an action comedy, as it’s only cute so many times to watch June try to understand how a gun operates. Eventually, the film gives up, drugs June, and fast forwards through an entire scene where Roy frees himself from capture and carries an unconscious June on his back as he escapes from the fortress of a heavily guarded Mexican cartel. That might have been a cool thing to watch, but in the interest of time, and the fact that it would literally be impossible, the film felt it best to cut it in favor of June closing her eyes in prison, and opening them on a beach, where the pair start rolling around on the sand in swimsuits in under five minutes, a scene peppered with some creepy jokes about just how she managed to put on a bikini while being completely knocked out. 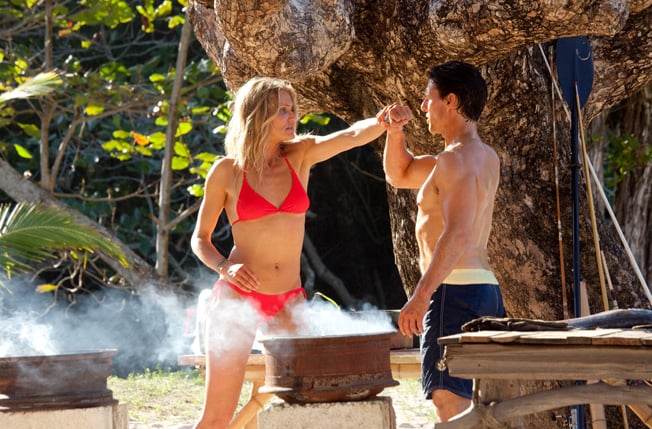 “You stripped me naked and put me in a swimsuit while I was unconscious? How thoughtful!”

Knight and Day swerves out of control with all its plot twists and turns and eventually crashes and burns as you would expect. The biggest mystery worth solving in the film is just why the hell it’s actually called Knight and Day, as yes, one of the characters turns out to be Knight, but now I’m hunting through IMDB, trying to figure out how the hell I managed to miss Day. It was a horrible pun of a title to begin with, but it’s even sadder now that it doesn’t even make sense.

I’m just stunned to see so many talented people in a movie this bad. Cruise, Diaz, Paul Dano, Peter Sarsgaard and director James Mangold (of Girl Interrupted and Walk the Line no less) should have taken one look at this completely amateur script and jumped off the first freeway overpass they saw to escape. 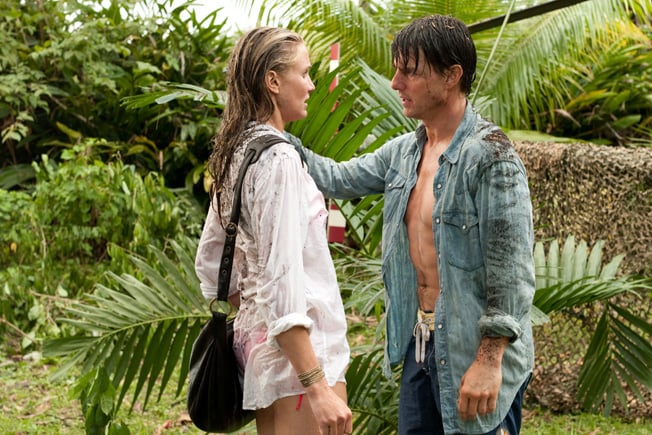 I have exceedingly low hopes for the upcoming Wolverine movie, but that doesn’t mean Hugh Jackman isn’t awesome! If only someone would come along and direct him in a good movie. Like I don’t know,… 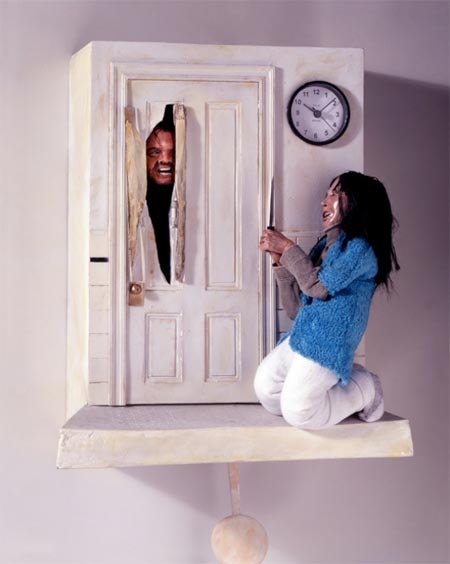 Sort of like Kunu from Forgetting Sarah Marshall, I don’t wear a watch and instead just check my cell phone if I need to know the time.  So, I’m not really into nice watches, which…

When Man of Steel opened theatrically, I pretty much avoided all of the posts, columns, and chatbacks debating the merits or de-merits or even the general quality of the film. That was deliberate on my…

(click to enlarge) Woot always has pretty good shirts for its daily sales, but I saw this one this week that really stood out. It combines two of my favorite films that you would think…

I didn’t realize that Charlie Day was in Pacific Rim until just now, as I wasn’t exactly sure what the hell Always Sunny had to do with the movie. Day plays some sort of comedic…