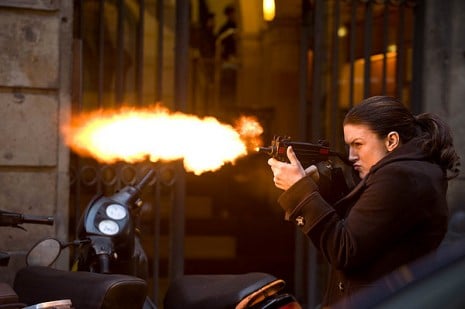 We need female action stars. Just look at the cast of The Expendables if you don’t believe me. It’s full of burly men who each have been in the lead of a half dozen classic action films over the past thirty years, with nary a woman to be seen.

There are some that try, but only halfheartedly. Beckinsale and Jovovitch only suit up for ass kicking when their respective Underworld and Resident Evil franchises give them a sufficient paycheck to return. Other actresses like Jolie, Weaver and Thurman have dabbled, but only in extremely select roles, and action is not their main forte.

That’s why it’s refreshing to see an attempt to build a female action star from scratch. Steven Soderbergh has enlisted MMA fighter and former American Gladiator Gina Carano to try and reinvent the action heroine, in a no nonsense, no spandex way. And it almost works. If only she had a better movie to brawl in. 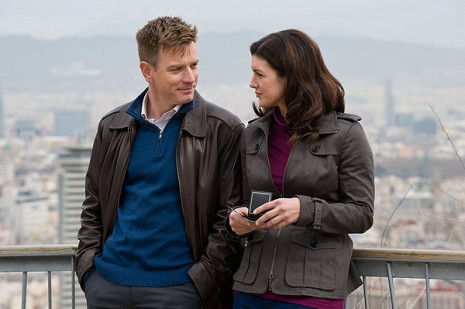 Unfortunately, the trailer allows you to skip the plot reveals of the first two thirds of the film.

From the get-go, Haywire dips into familiar Bourne territory. Mallory Kane (Carano) is a spy-for-hire who is betrayed by her former boss and lover (Ewan McGregor) and marked for death. She must punch her way to some answers, and avoid taking a bullet in the head in the process. What unfolds is a seemingly complex mystery as to why she was burned, but when the answers finally do come, it’s not exactly a jaw dropping reveal.

It’s less interesting to dissect the finer points of the relatively mundane spy story than it is to talk about Carano and if she’s the gender switched action hero we’ve been looking for. I appreciate the cold, calculating brutality her character has, and the film resists endless amounts of temptation to play up her sculpted form and features for sex appeal, a trap almost every potential female action star falls into.

She’s sexy without trying, and there’s something more gratifying about seeing her choke out Michael Fassbender with her thighs than it is watching Kate Beckinsale do a cartwheel in ass clenching spandex for the fiftieth time. 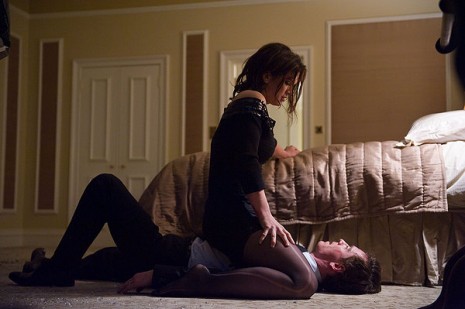 “If I wasn’t about to die, I’d be sufficiently aroused.”

Carano might be a good theoretical hero in the way she’s presented, free of extraneous sex appeal and realistically finding a way to kick all the boys’ asses, but I’m not so sure about her as an individual. I remember her as the one American Gladiator who never uttered a word during the entire run of the series, and to jump from that into headlining an entire feature film is something of a leap of faith for Soderbergh and everyone involved. Also, it’s been confirmed that they had to heavily alter Carano’s voice in post-production, as the director wasn’t satisfied with the final result after filming wrapped. In short, even if Carano has shown she’s more than capable of putting the hurt on various established actors, it’s not clear if she’s actually one herself, or if this is going to be the kind of star-making discovery Soderbergh clearly wished he was making.

The fact is, this movie is getting a lot of attention mainly because it has a non over-sexed female in the lead role. If you subbed in any other muscle-bound male actor into Carano’s part, the story isn’t nearly enough to make it stand out in any sense. Rather, the most memorable aspect o f the film sticking with me is the truly atrocious and bizarre soundtrack that pervades the film, which sounds like a cross between a bad film noir score and the background music of SimCity 2000.

The fights are intense and “realistic” to a degree meaning there’s no slow motion or wire play, but a few of them feel a little too much like staged combat. Even if Carano is a real fighter, some of the scenes feel a touch forced. While her brawls in a diner and a hotel room are satisfactory, her finale bout on a beach looks like a choreographed WWE title match. 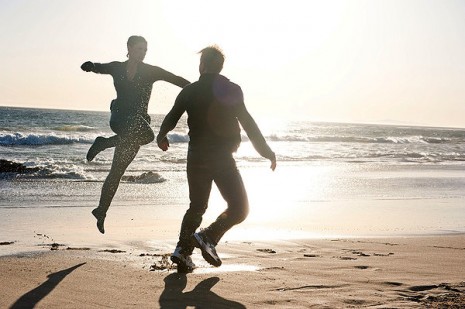 “When I jump I have more punching momentum!”

I like Carano. She’s clearly a hard worker judging by the hell she’s put through in this film, but it’s hard to tell if the coldness of her character is a creative decision, or the fact that she’s just not a trained actress and doesn’t really know how to convey much of a personality on film. Perhaps this is a skill she can learn in future features, but I don’t think she’s quite ready to headline anything else at this point. I do hope she can grow as an actress, and someone can craft a film that showcases her brawn in a more compelling manner.