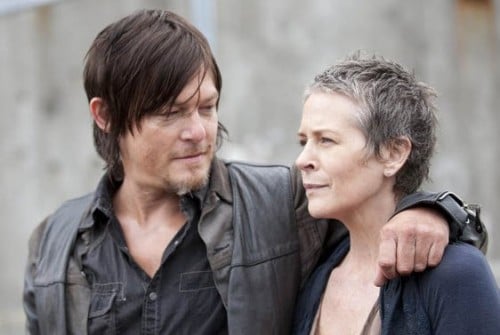 With relatively little fanfare (or maybe I just don’t watch commercials) the Walking Dead returned last night for the beginning of its fourth season, which will probably be split between fall and late winter, knowing how the show tends to work. Though if AMC has its way, between it and its coming spin-off, we’ll have The Walking Dead on for 52 weeks a year.

We ended last season with Andrea anti-climatically dead, the Governor in full crazy mode and fleeing, and the prison taking on the remaining townsfolk of Woodbury in what seemed like a dubious decision at best.

But turns out the skeptics were wrong, and the prison society has evolved over what I’m guessing is a period of a few months into a neat little community. They have horses! And plants! And pigs! Well, dead pigs, but at least they’re trying.

All these new faces means fresh meat for the grinder, and I predict a coming scene of mass chaos where extras are slaughtered by the dozens. Two new faces already died this week alone. Luckily for Carl, they were both teenage boys, dramatically upping his chances with little miss blondie, Beth.

Rick is now fully in control of his faculties, though he’s shaken from going off the deep end last year in the wake of Lori’s death. He even refuses to take his gun out beyond the fence, which even with his past condition, doesn’t make a whole lot of sense to me.

His storyline featured a surprisingly great performance from a one-off character, a crazy lady roaming the woods who looks about halfway between dead and a walker already. There was obviously something very wrong with her whole situation from the beginning, and sure enough, she’s been trying to keep the severed head of her husband alive for a while now, and was planning to feed Rick to him. 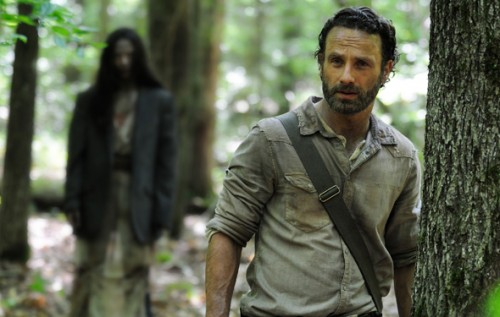 I thought the ensuing “three questions” scene as she lay dying was rather well done in a show not particularly know for its nuance. Though I disagree with Rick’s decision to just leave her there. You don’t leave zombies alive (well, so to speak). Did he learn nothing from Carl karmically killing Dale with the zombie he let live in season two?

Anyway, the bulk of the group including Glen, Michonne, Tyreese, Tyreese’s sister, local celebrity Dale and two new guys went to a nearby grocery store for supplies. What followed was a torrential downpour of zombies with a 100% chance of a new character dying. The coin flip decided that it was Beaver from Veronica Mars, rather than new black guy who appears to be an alcoholic going through withdrawal. As much free booze is around after the apocalypse, I do wonder how you would manage to survive for so long while probably drunk most of the time. I hope we hear more of this guy’s story.

Another well-done scene was when Daryl comes to give Beth the bad news about Beaver, but she doesn’t even bat an eyelash. “I don’t cry anymore,” she says. Probably could have been acted out with a bit more conviction, but it’s pretty powerful moment to see someone so young so numb to tragedy. I did think the “30 Days Without an Accident” sign was a bit cheesy, however. 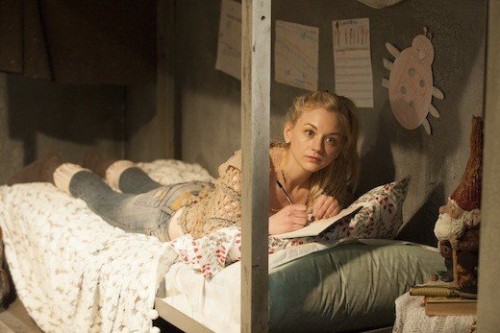 “Dear Diary, another boyfriend got eaten today. Is it something I’m doing wrong? Why can’t I pick a competent survivalist?”

It was obviously only a matter of time before things went bad inside the prison, so it should be no surprise that glasses kid dropped dead and became a walker in the show’s closing moments. Did I miss something where he would have gotten infected? Is this just a rapid onset disease that doesn’t have to do with a bite or contamination? Is it what the pig had?

I’m still sort of miffed that the show let the Governor live at the end of last season, as I think though he was a reasonably good villain, his time had come. I’m wondering how they’ll bring him back, and what state the prison will be in when they do.

I also miss forward momentum on this show. They used to be going places, rather than simply trying to not die, and I miss having a goal other than “survival” like heading to an army base or the CDC. That said, I did like this premiere and with Andrea AND Lori gone now, there will probably be 80% less overtly stupid decisions made by characters onscreen, so that’s something.

I feel like this show could last forever, but I just hope they use the fantastic potential of the world and stop being stuck in the same place so often. Season two was just farm, and are seasons three and four really going to be the prison? I’m hoping zombie nerd is the catalyst for big changes on the show from here on out.