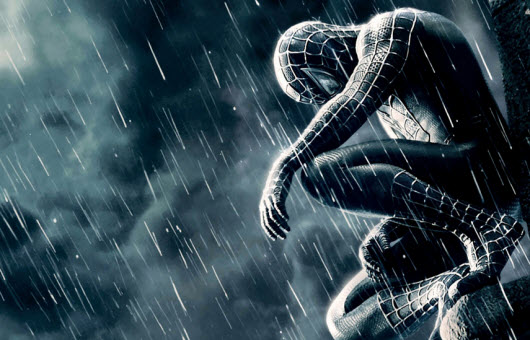 Well, I’ve done it. 162,000 words later, I’ve finished the final book in my Earthborn Trilogy, The Sons of Sora. But before all six of you out there who might be fans of the series get too excited, it may still be quite a while until release. I’ve just signed a deal with a publisher who will print (literally print, like on paper) all three books in a grand-re-release some time from now. It’s pretty cool and kind of a lifelong dream, and I’ll have more to share on that later.

But for now? I just wanted to spend a little time talking about the third chapter in trilogies, and why it’s so hard to make them good. Is mine good? I have no idea. I’m satisfied with it, but I suppose I won’t know until the public gets their hands on it. But I did try to learn from the successes and failures of other third-trilogy books/movies, and I really understand the plight of trying to close out a series effectively. And also why it can be really, really hard to let go, which is how trilogies spawn more sequels and prequels past what was originally intended.

It’s a pretty well known fact that many times trilogies tend to go downhill in their third installment. I think this is best demonstrated in Dan Meth’s now famous “trilogy chart” seen below which chronicles the successes, and mostly failures, of the third trilogy in a movie series. I always have viewed my books as movies that haven’t been made yet (I’m a dreamer), so charts like this are still relevant to me from a storytelling perspective. Though I have seen it in literature as well. 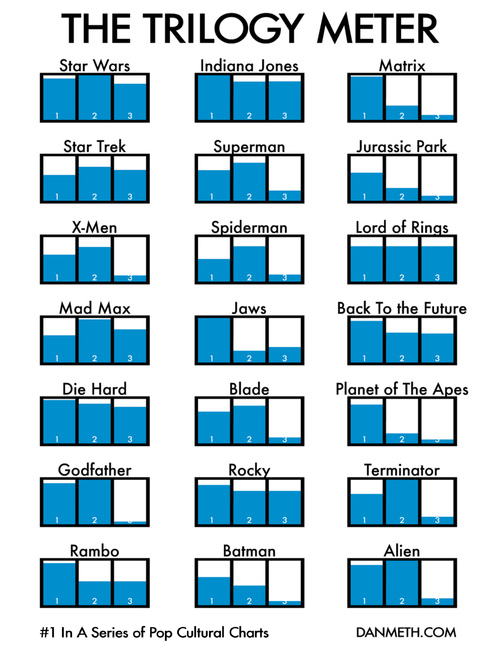 I won’t go through and comment on each of these bad movies individually, but there are a few common threads to be drawn on. The first?

With a concluding installment in your story, there’s a lot of pressure to go bigger and badder than anything that’s come before it. Sometimes that works, as with The Return of the King, or even Revenge of the Sith, which was leagues better than its prequel brethren (although not great standing by itself). But for movies like Spider-Man 3 or X-Men: The Last Stand, bigger just means “overcrowded,” and the characters you love get lost in the shuffle much of the time, as there’s simply too much noise for them to push through.

I have tried to raise the stakes in a few ways in my last book. Outside of being just straight up bigger (The Last Exodus was 105K words, The Exiled Earthborn was 125K, and now The Sons of Sora is 160K), it features a split narrative for the first time between two characters instead of one. I have seen this go disastrously wrong before, as that’s exactly what happened in the third Divergent book and it was terrible, but I think I made the characters distinct, and they’re not constantly in the same place, which helps avoid the Divergent problem. Still, it’s a risk.

The actual story had to escalate too, as I started the book with essentially one bad guy hunting down my three leads. There were literally four characters in my entire book. Now, I have to capture a full-blown war between two worlds, something I’ve mostly avoided until now in the series. But the war has to end, and that requires more effort and larger-scale action than anything I’ve done before. It’s easy to overdo it however, and I can’t have my characters get lost in an endless array of action sequences like it’s a Michael Bay movie.

ANSWERING ALL THE QUESTIONS

This might be more of a literary/TV thing than something that applies to the trilogies seen above, but when you have a series like mine and you’ve been setting up a host of plotlines or long-running mysteries, you have to deliver. And you have to ensure the delivery doesn’t suck. If it does? You end up with something like Lost, where half your questions remain unanswered, and the half that are answered are a disappointment.

It’s kind of a terrifying thing to base your entire series on a central reveal, and then wonder once you’ve laid it all out if it even works. You can go back and re-edit certain passages if you don’t like this or that, but there’s really no saving the core structure of your book if the most important mystery threaded through the entire series is a letdown.

I usually structure my mysteries in short-term, medium-term and long-term plotlines. Short-term mysteries are ones that are usually answered within a few chapters if you just keep reading. What’s in that locked room? Why is this gun named ‘Natalie’? Stuff like that which keeps people reading, but isn’t the most pivotal plot point out there. Medium-term mysteries usually span a single book. Where is the mystery planet Alpha is taking Asha and Lucas? What is the Fourth Order’s grand plan? These are usually answered by the end so the book doesn’t end on a total cliffhanger, like a season of The Killing which promises a murderer, yet stalls for another 12 episodes after you thought you were getting answers. And then there’s the long-term mystery. You may have a few of these, but I really only have had one major one which explains the connection between Earth and all the other planets in the books. This is the one that was the central premise of the entire series, and something I’ve been dropping hints about for years without hopefully giving too much away. This is why you want to finish the series (hopefully). Well, that and because you like the characters. Which leads me to… 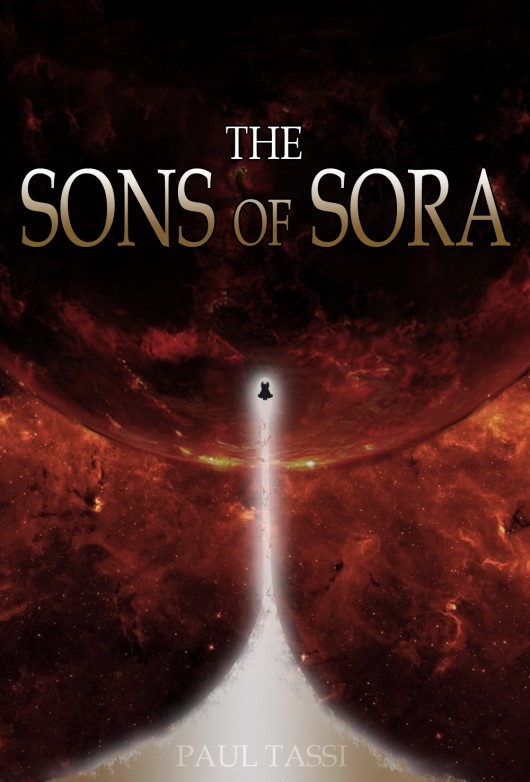 This has been a unique experience for me, as the Earthborn Trilogy contains my first fully-developed and realized fictional universe populated by a cast of characters that has grown to feel like family over the years. As such, I found it incredibly hard to let go of them as the series was ending.

In terms of pure story, it’s like you want to kill all of them, or none of them. Killing them all may provide some dramatic weight, but it’s kind of a cop-out. Letting them all live is a little too rosy, though I  understand the appeal of why JK Rowling didn’t want to kill really any important characters in the final Harry Potter book, even if it would have made for a heartwrenching moment. Sometimes when you have to make the decision to kill a character you love, you simply…can’t.

I won’t say who does or doesn’t die in my own series, but what really got me was simply that their story was ending, regardless of their life or death. I always planned this to be a trilogy and nothing more, and I have no plans to go back to the series. And yet, I couldn’t resist leaving the door open for more books in the far flung future. Nor can I stop thinking about a prequel maybe set during the initial invasion of Earth, something we didn’t see at all in the books. But I’m resisting the urge for now.

When I’m writing these books, every time I have a quiet moment or time for a spare thought in my day to day life, I’m thinking about what I’ve already written, and what’s to come. Even if I have my long term plot structure mapped out, I’m always writing the next few scenes in my head, connecting the dots. But now? There are no more adventures for my characters. No more stories in my head. And that can make me profoundly sad sometimes.

It’s why I can’t stop writing. I’m already five chapters into a new series, one that’s jumping into religious fantasy, and you can interpret that how you will. New characters, new storylines and so on. I may even finish the first book before The Sons of Sora is released, but I still have a long way to go. And yet, the characters are still too new to me. I don’t know who they are yet. I kind of know who I want them to be and where I want them to go, but they don’t feel like family. I’m hoping they will in time. The Last Exodus sat as a Word doc of barely 5,000 words for years until my cousin self-published his own sci-fi novel on Amazon and kicked my ass into gear. Lucas was no one to me then, but he’s like a brother to me now. Alpha wasn’t going to talk the whole book. Asha didn’t even exist. These kind of characters grow in time, as does your relationship with them, and it can be hard to part with them in literary death, or even more so when your series is just…over.

I may be rambling now, but people always ask me about my writing process, and I’ve learned a lot about attempting to make the last part of a trilogy not suck. I have no idea if I’ve succeeded or not, and I will need you all to tell me. I have zero idea when The Sons of Sora will be published under my new deal, but I will be sure to keep you posted. Probably best to follow me on Twitter for updates, or my Facebook fan page for me personally, or the series itself.

Anyway, you guys were all my very first audience, and I hope you’ll stick with me to the end.

Ah yes, this is taking me back to when I was a kid.   The movie Running Scared was on cable for at least 3 weeks during the month of September and I had to share… 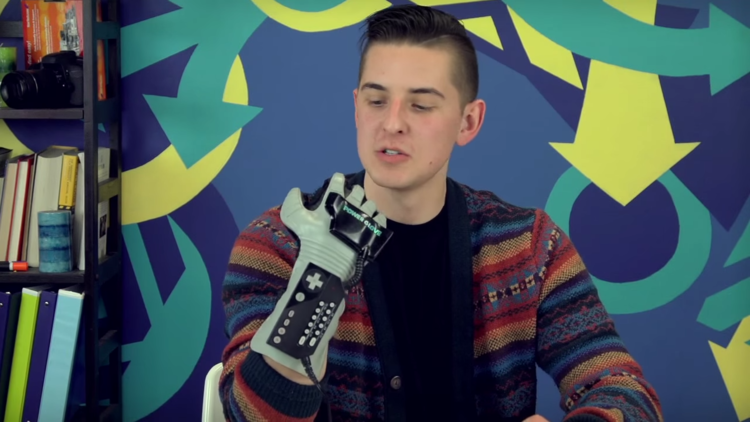 Talk about sad.  Those from my generation of gaming will watch this and probably cry from the nostalgia.  Those of us who knew how awesome the power glove was back then are just a distant…

Alright China, let me get this straight (I’m assuming this is Chinese, because seriously, who else?) Your superhero roster for your ultimate team, the “Sense of Right Alliance,” is as follows: – Superman – Batman…

I personally like the “shouldn’t be in charge of anything” section. Via

Apparently, GE crafted a clever campaign by using Thomas Edison instead of Ryan Gosling on ‘hey girl’ memes. These lines are actually quite funny and I can imagine my engineering friends saying these phrases. Pick…

I’ve got one word for you guys:  Harris.   Some of you might be a little too young but those of you who are in my generation probably know what I’m talking about.   The ever famous…