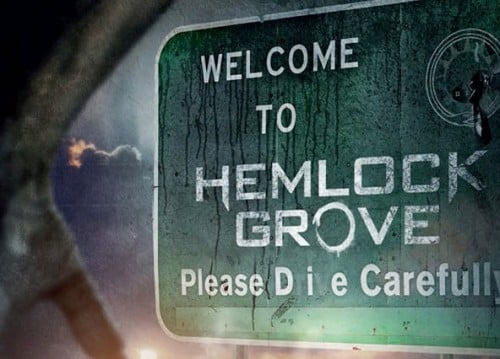 Echoing the luster of True Blood’s groundbreaking first season, complete with a Skarsgard (one of Alexander’s many brothers, Bill), Netflix introduces Hemlock Grove.  While there are many similarities to horror-drama crossovers such as Twin Peaks and American Horror Story, I found this storyline genuinely entertaining, captivating, and not only a little disturbing, unlike AHS which failed to hold my interest beyond the first episode.  Part of Netflix’s new exclusive lineup, including House of Cards and the resurrected Arrested Development, this series is gaining notoriety thanks to director/producer Eli Roth (Hostel) and his insistence on pushing the bloody envelope of carnage and supernatural terror.

Based on the novel by Brian McGreevey, the 13-part series is set in the backwoods of steel-town Pennsylvania, ranging from a forgotten trailer park to a new-wealth American castle.  Although most appear as normal humans, there is no lack of monsters – gypsies, werewolves, upir (Russian vampires), mutants, zombies, angels – at this point, I’m just waiting for aliens to show up and round out the collection of beasties.  Throw in a few garden variety extramarital affairs, casual drug use and teen pregnancy and there’s your show. 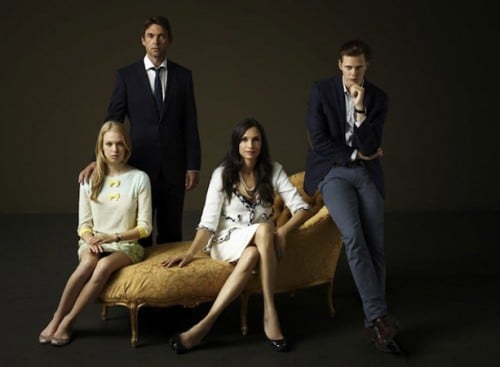 The intrigue revolves around the wealthy Godfrey and nomadic Rumancek families, strange bedfellows harboring their own, and the others, dark secrets.  Famke Janssen (X-Men) is Olivia Godfrey, the cold matriarch of our upir family complete with a Cruella de Vil styled wardrobe and the occasional (when she feels being particularly bitchy) British accent.  She keeps her true nature concealed from most of her peers and the meager peasants of Hemlock Grove while displaying a Jocasta-esque interest in golden child, Roman (Bill Skarsgard).

Roman channels Ryan Phillipe in Cruel Intentions, complete with vintage Jaguar, depicting a spoiled sociopath harboring an incestuous love/lust for cousin Letha (Penelope Mitchell, cousin of Silent Hill’s Radha Mitchell).  Letha Godfrey is the archetypal blonde good amidst the brunette evil of her family, whose father Norman (Dougray Scott, MI-2) fills the stoic voice of reason, with a proper American intonation, as town psychiatrist and brother of Olivia’s late husband and corporate magnate JR.  Rounding out this gothic circus is the aptly named Shelley Godfrey (Nicole Boivin), a mute and towering monster of a 14-year-old with a glowing personality – literally.

Battlestar Galactica fans will be pleased with the recurring appearances of Kandyse McClure as Dr. Clementine Chasseur, a werewolf hunter masquerading as a fish and wildlife officer, and Aaron Douglas as Sheriff Tom Sworn, a modest and practical single father whose world disintegrates amid the ongoing search for the vargulf, an insane werewolf.  The truly impressive performances come from newcomers Landon Liboiron as gypsy werewolf Peter Rumancek and Freya Tingley as aspiring teen novelist Christina Wendall.  Veteran Lili Taylor (The Haunting, Ransom) serves to bind the remaining Rumanceks together as Peter’s concerned mother Lynda, perhaps the most “normal” of Hemlock Grove’s residents. 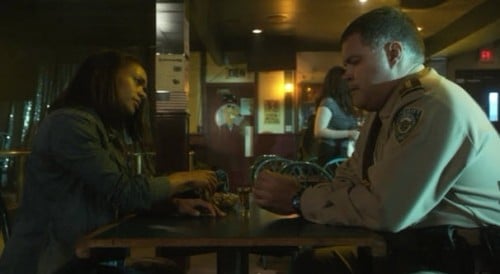 The disappointment of the series is in the overplayed and underdeveloped “evil scientist” in Dr. Pryce (Joel de la Fuente), who’s smiling through gritted teeth is as transparent as the premise of the malevolent Godfrey Corporation operating out of the proverbial “white tower.” Another mildly frustrating aspect of this series is its adherence to that old horror cliché – if you’re a young girl and you enjoy sex, have had sex, are thinking about having sex or think you might one day enjoy sex, you’ve signed your own death warrant.  Sex and nudity abounds, most being naughty or forbidden, and the consequences ring ever-so-true in the immortal words of Marvin the Android: “this will all end in tears.”

What the series lacks in originality it more than makes up for in its prolonged and gruesome werewolf transformation scenes.  I won’t spoil it for you, but if you’re not cringing, check and make sure you’re watching the same show.  It’s got all the Achilles-severing goodness of Hostel, but manages to retain a darkly humorous edge and some small tendrils of humanity. While the pace initially drags, especially during painfully awkward teenage love tension and seemingly irrelevant gypsy campfire tales, the momentum increases by the final episodes to the point I’m frantically rewinding and re-watching to make sure I’ve caught everything.

Overall, I’d give Hemlock Grove a solid B, with moderate promise to continue, but standing well enough on its own merit.  Without spoiling it for Netflix users (or anyone, really, since its slated to be available on DVD this summer) I see this going in much of the same vein as AHS if continued in a second season, due to a largely depleted female cast.  Then again, with werewolves and vampires, the traditional constraints of life and death are usually abandoned, so who knows what may come in an as-yet unannounced second installment.

Why do I feel like “Being on Sesame Street” is the new “Hosting SNL” for the “so-hot-right-now” actor crowd? Such is the case today with Benedict Cumberbatch who has stopped by the show in order…

You know, it doesn’t seem so long ago that HBO’s supernatural sex and violence fest was the toast of geektown. A best-selling series of books to draw from, the HBO pedigree, an original vampire mythology…

After Benny’s write-up of Black Mirror, a bunch of recommendations came in for similar shows she, and the rest of us, should experiment with if we liked that sort of thing. One name kept coming…

After two mediocre weeks, The Walking Dead shambled back to life with a powerful penultimate episode. It was probably the best outing of the season outside of “Clear,” and it should come as no surprise…

Something strange happened to me this weekend, and I just thought I’d share so see what you make of it. Twas the day after Christmas, and I was at the mall returning things to get…