As usual, the last year of Cartoon Network’s Adult Swim block didn’t pass without controversy. Given the lengthy gaps between seasons for Aaron Mcgruder’s suicidally-offensive animated racial satire The Boondocks, any new season has been cause to celebrate over the last ten years. After a four year hiatus the show returned for a fourth season, but it wasn’t quite intact. The man who created the legendary comic strip in college and eventually brought it to the small screen in an even more in-your-face form was no longer involved.

The exact reasoning behind this decision remains a mystery, but Cartoon Network wasn’t done with the radical satirist yet as McGruder was slated to return to television with a bizarre live action series, Black Jesus. The Boondocks has been one of my favorite animated shows since the day it premiered, but could such a unique project survive the loss of the man who built it almost entirely with his own blood, sweat, and tears? And could McGruder possibly duplicate his success in the animated medium in live action? Now that both seasons have run their course, let’s see which one got the better.

While Boondocks surprised me by failing to crash and burn in its final season, it was clear that the show was lacking something. Like the fourth season of Community, it had a very clear feeling of going through the motions by trying to do the sorts of things that made the first three seasons so great but without really understanding what made them so great. A lot of it just felt flat and lifeless. 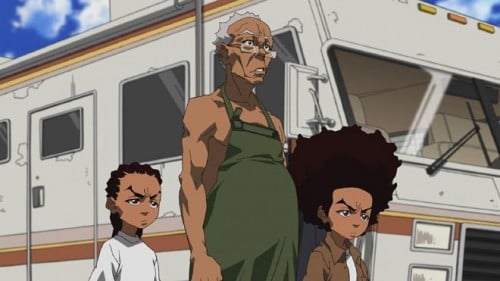 The first three seasons of The Boondocks utilized a massive helping of anime style and classic Asian cinema references from flying guillotines and Bruce Lee to John Woo and Zatoichi. Not just anybody can successfully integrate these kinds of elements into a political sitcom about a black family living in white suburbia. In fact, that list is pretty easily whittled down to one man. The kind of man who is comfortable tearing down the callowness in his own culture and taking on entertainment giants like BET and Tyler Perry, even if it means his episodes are never allowed to air once the big boys discover they’re being mocked.

In place of this unique blend of satire and homage, season four took a broader approach but managed to achieve some semblance of good television even in McGruder’s absence. Rather than lambast the intellectual deficiencies of popular black culture the new season courted controversy the old-fashioned way -by pointing out racial and economic inequities. The old episodic format was also replaced with an overarching narrative in which the Freeman family’s debt sees them returned to slavery in a solid indictment of modern American capitalism and the more obscure references that helped define previous seasons were replaced with parodies of more mainstream fare.

For example, in the season premiere the Freemans discover a revolutionary new black hair care product made from an illegal explosive (current products have been shown to disintegrate aluminum cans irl), amusingly named “The Bomb”. It seems like selling this product is the only way to reduce their debt. Can you smell the Breaking Bad parody yet? The signature moment happens when Grandad pulls out a gun and declares that he’s going to stand in the middle of the road in his “draws” and “go out like a [bleep] G”. As the sirens approach, Riley can’t resist remarking “you look gay”. Not the most sophisticated moment in the show’s history, but I sure as hell laughed. Have a trailer.

The best episode of the final season was the last and it focused on Riley’s (and by extension, black culture’s) casual homophobia in a concept that must have been formulated by McGruder prior to leaving the show. Because in case you hadn’t heard, gay is the new black when it comes to social oppression and the protectionism that eventually follows. In a particularly amusing sequence, the characters alternate between using the N-word and it’s homosexual equivalent (F-word is already taken), noting that Cartoon Network allows the N-word but censors the gay one that I’m not comfortable repeating here in a very funny fourth wall bit that even anticipates the release of an uncensored DVD .

All in all, I can’t really complain. Season 4 of The Boondocks may have lacked that special something that the show’s creator provided, but surprisingly it didn’t suffer as much as Community did without Dan Harmon. I’m glad it went out on a controversial high note and didn’t play it safe, at least. By the time it was over, I was ready to see what McGruder had in store for me. The first season of Boondocks featured a play called The Adventures of Black Jesus, and while we never got to see it, it was apparently a masterpiece and appeared to feature wire-fu and samurai. Would I watch McGruder’s vision for a black Jesus? Don’t be stupid. 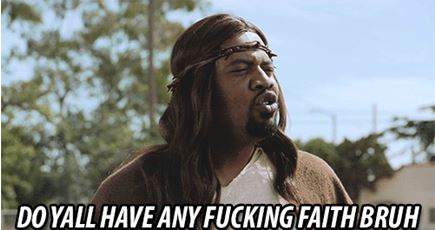 The premiere of Black Jesus was the highest-rated cable show of the week and beat out most network television as well. While some token controversy from religious groups was heard, the famously touchy Catholic League had a measured, even-handed response to the “mixed bag” presented in the title character, actually opting to watch the show before commenting on it instead of the usual knee-jerk condemnation. You’ve got to call that a win.

But was the show really good? Weeeeeelllllll…..kind of? Yes. I’ll go with yes, but it was far from what I thought I was getting. When the creator of Boondocks –a comic and cartoon so aggressively confrontational it makes South Park fans cringe- makes a show called Black Jesus you have to expect great things; a brutal indictment of the failings of religion, a confrontation of the hatred that infects so many churches and, of course, challenging the eternal assumption that Christ, a Middle Eastern man, was Caucasian. And if there is wire-fu and samurai, I’ll take that too.

What we got: not so much. Shockingly, Black Jesus functions more as a good-natured American stoner comedy brimming over with positivity (and profanity) than any sort of satirical shot across the bow of American society. My favorite moment from the premiere episode was Jesus, played by a charismatic Gerald “Slink” Johnson, shouting “I love your bitch ass anyway!” at an angry homeless man. Again, not exactly sophisticated comedy, but a laugh is a laugh.

The premise is that Jesus is a vagrant living in modern Compton with his disciples made up of a bunch of locals that represent your typical black comedy archetypes. Their plan is to create a community garden where they can grow marijuana, but a lot of unbelievers stand in their way, including some Hispanic gangbangers and a slimy landlord played by a very funny Charlie Murphy. Dig it.

Although I definitely enjoyed the new show, I kind of wondered what to make of it at first. I mean, Aaron McGruder has used Boondocks to mock portrayals of black people in films like Soul Plane and yet Black Jesus is not all that far off in terms of content. Take out the religious aspect and you’ve just got a bunch of racial stereotypes getting stoned and cursing at each other.

But having said that, the series does differentiate itself by portraying a modern character embodying Christ’s values of humility, love, peace, and acceptance in a modern world that has often twisted his message into one of selfishness, hate, violence, and judgementalism. In the show, Jesus seeks and often finds solutions to conflicts through sharing, respect, and positivity. At first glimpse, that may not seem controversial, but have you been on the internet or turned on the news lately? When’s the last time anyone you know turned the other cheek? Did unto others as they’d have other do unto them? Loved their neighbor as they love themselves?

Regardless of where anyone spends their Sundays, this is not a Christian nation if we’re stacking up our actions next to Christ’s words and Black Jesus somehow manages to get that message across without even a hint of the gung-ho snark its creator is known for. The viewer is left to arrive at that conclusion (or not) in their own time if they but choose to take literally the meaning behind the letters WWJD.

Could it be McGruder is just tired of simply mocking society’s deficiencies and wants to put out something positive for once? In a way, creating a show espousing genuine Christian values and subtly questioning the differences between legal/illegal and right/wrong by portraying Jesus as a product of black culture who enjoys the occasional puff and uses questionable language while living up to the actual values he preached in the gospels might be as strong a statement as anything in The Boondocks. 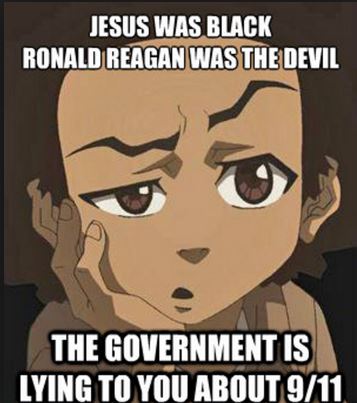 And a bit more subtle.

So which is better, McGruderless Boondocks or Black Jesus? As much of a cop-out as it is, I can’t decide. While old Boondocks beats both easily due to its uniqueness and general insanity, both shows had their good points and letdowns in 2014.

Moments like in the conclusion to the Stinkmeaner saga in which Grandad dreams a scene from The Empire Strikes Back where he confronts the elderly man who made him lose his cool over nothing (known on the show as a “[N-word] moment”) in the first season and has stopped by to torture him every season since and finds that what he truly fears is himself becoming the angry old bastard was another example of The Boondocks living up to its past quality.

But then there’s McGruder’s new hotness; a show that appears vapid and lazy at first glance, but rewards critical thought on its societal context with the revelation that nothing like it has ever really been done before. While it’s not the hilarious be-all blockbuster of harsh controversy we were expecting, Black Jesus’ brand of positive vibes and soft comedy might actually represent something as revolutionary as his older work even as it appears to be exactly the opposite. Plus the sight of horses running through Compton made me giggle way more than I’d have thought.

So watch them for yourself and you decide. I think I may have to wait for the DVD’s before I come to a legit conclusion about which season of controversial black television this angry Caucasian nerd prefers. Anime-styled political parody or live live-action religious stoner comedy. Really, who could pick a favorite?

I’ve seen a lot of good Halloween costumes floating around on the internet ahead of the holiday this week, but I had to stop and do a double take when this one passed by my…

What the hell? There’s ACTION allowed in Game of Thrones? I kid, I kid. Despite its relative calm over its first four episodes, I have been a big fan of Game of Thrones and never…

We’re all waiting with bated breath for Community to return, and see if it can still have the same magic even though NBC threw showrunner Dan Harmon off the boat. They do love their theme…

“REALLY?” I’m usually pulling a video or picture from somewhere else to feature on Unreality, but every so often a text article comes along that’s worth sharing. I found this piece from the New York…

Wow, that went by fast. It in no way seems like ten weeks ago that Game of Thrones premiered, but I guess time flies when you’re watching the best show on television. Though it’s hard…